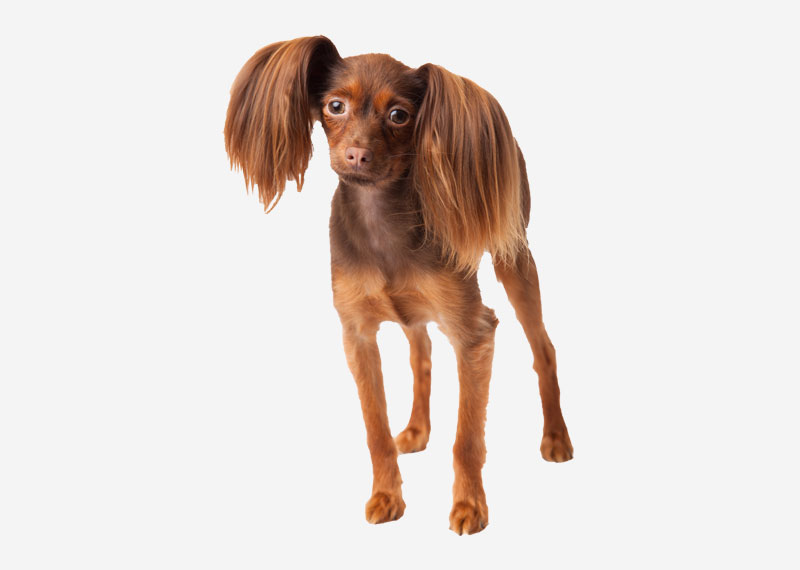 The Russian Toy (also in Russia called the Russkiy Toy, Russian: Русский той) is a very small breed of dog originally bred in isolation in Russia from the English Toy Terrier which is known today as the Manchester Terrier. There are two types, smooth haired/coated and long haired, which were known by a variety of different names until brought together under the same standard as the Russkiy Toy in 2000. The breed was nearly wiped out twice; first following in the 1920s with the rise of Communism due to the toy dog's traditional link to the aristocracy and secondly in the 1990s with the influx of foreign breeds following the fall of the Iron Curtain. The smooth haired type is the older of the two, with the long haired type first appearing in 1958.

Until the 1990s, the breed was almost unknown outside of Russia, and so relatively few details on associated health issues are known. The Russkiy Toy was bred as a rat fighter and as a watchdog originally, and can still exhibit the vocalization expected from the latter. It is a friendly dog and can become very attached to a family unit. The breed has been recognized by a couple of international kennel clubs, and is registered in the Foundation Stock Service of the American Kennel Club. Due to its size and similarities to the chihuahua, the two are often compared.

A Russkiy Toy will often require veterinarian assistance in changing from its puppy teeth to its adult set. Without this surgery, two rows of teeth will form which can cause gum infections, bad breath and prevent the permanent adult set from coming forward.

As with most breeds of dog, the Russkiy Toy can suffer from patellar luxation, which is where the knee cap slips out of place when the knee bends as the groove that normally holds it in place is too shallow. It is usually an inherited defect, which occurs during the development of the foetus and rarely by trauma.

Russkiy Toys can suffer from bone fractures due to their small and sometimes delicate nature. There have been reports of severe allergic reactions to certain types of flea medication and the rabies vaccine, causing epileptic seizures in some dogs.

The first evidence of English style terriers in Russia can be seen in the Museum of Zoology in Saint Petersburg. On display is an English style terrier dated 1716–1726 with a sign that reads "This dog is a short hair terrier named Lizetta. It personally belonged to the Russian Emperor Peter the Great. Towards the start of the 20th century, the English Toy Terrier was one of the most popular toy dog breeds in Russia. Between 1920 and 1950, their numbers were greatly diminished following the October Revolution as these types of dogs were linked to the aristocracy and frowned upon. When the breeding was restarted almost all of the dogs used had no pedigrees or were even purebred.

The political isolation of the country at the time caused the creation of a whole new breed as breeders sought to stabilise the toy sized terriers at the time into a standard breed. The first standard for the two varieties was written in 1966 and authorized by the Ministry of Agriculture. After the fall of the Iron Curtain, a number of foreign small breed dogs were imported, and this caused the popularity of the Russkiy Toy to decline. By the 1990s, the long haired type of Russkiy Toy had hit critical numbers, but luckily a resurgence occurred due to a new generation of dog breeders. Until this time the breed was virtually unknown outside of its homeland.