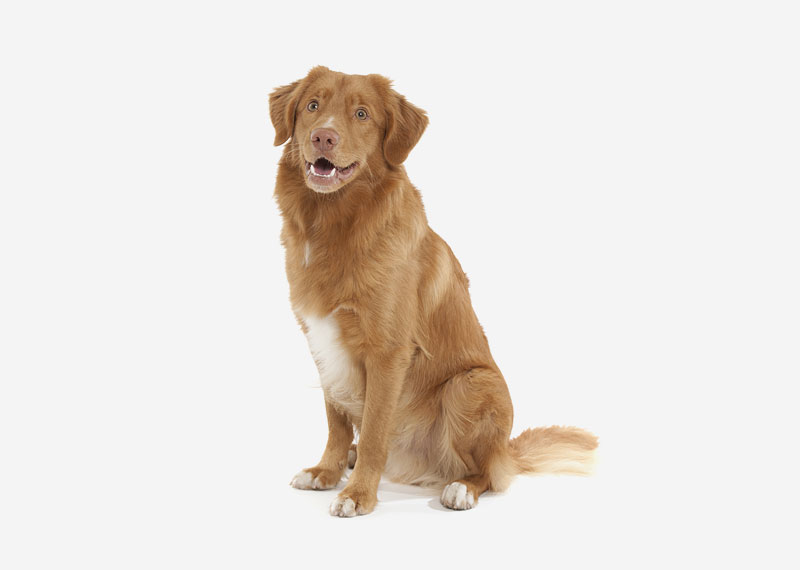 The Nova Scotia Duck Tolling Retriever, or Toller for short, is a medium-sized breed of gundog bred primarily for hunting. It is the smallest of the retrievers, and is often mistaken for a small Golden Retriever. Tollers are known to be intelligent, alert, high-energy dogs. Tollers get their name because of their ability to lure waterfowl within gunshot range. The breed originated in southwestern Nova Scotia, Canada, where they were used for tolling and retrieving ducks.

The breed was developed in the community of Little River Harbour in Yarmouth County, Nova Scotia, around the beginning of the 19th century to toll waterfowl. The breed was originally known as the Little River Duck Dog or the Yarmouth Toller. Its exact origins are not known but it appears that some possibly spaniel and setter-type dogs, retriever-type dogs, and farm collie may have gone into the mix. It may share origins with the smaller Kooikerhondje, which has a similar method of work.

The Toller was officially admitted to the Canadian Kennel Club in 1945. Declared the provincial dog of Nova Scotia in 1955, the breed gained national recognition in 1980, when two Nova Scotia Duck Tolling Retrievers were awarded Best in Show at championship events that included many breeds. On June 11, 2001, it was approved for admission into the Miscellaneous Class of the American Kennel Club and was granted full recognition into the Sporting Group on July 1, 2003.

Tollers are generally hardy. However, like almost all dog breeds, certain genetic disorders are known to occur in the breed. This is sometimes blamed on a relatively small gene pool. The Finnish breed club states the largest health problems in the breed to be immunity related. They can be affected by eye problems and hip dysplasia and are predisposed to immune-mediated rheumatic disease and steroid-responsive meningitis–arthritis.

Progressive retinal atrophy (PRA) affects about 7% of Tollers with an estimated 40% being carriers. The type of PRA associated with the breed is known as progressive rod-cone degeneration. The disease causes cells in the retina to degenerate and die, causing night blindness at first and complete blindness eventually. Collie eye anomaly is estimated to have a carrier rate of 5% and an affected rate of 0.5%. It generally only causes mildly impaired vision, but in more severe cases can lead to retinal hemorrhaging and detachments resulting in blindness.

Thyroid problems have been identified by American breeders as a priority issue, together with epilepsy and hip dysplasia. As many as 1 in 6 Tollers may have autoimmune thyroiditis. Symptoms of thyroid problems includes weight gain, skin and hair problems including hair loss, weakness, cold intolerance or infertility.

Addison's disease affected 1% of Tollers in a health survey, an incidence rate 10 times more than the general dog population. Carrier rate is estimated at 18%. This disease is also considered an important issue in the breed. Signs can include lethargy, decreased appetite, vomiting, weakness, diarrhea, increased drinking and urination, and shivering.

Aseptic meningitis (sometimes called steroid-responsive meningitis) has been diagnosed in increasing numbers in the Norwegian Toller population in recent years. Symptoms include intensive neck pain, fever, and lethargy. Prevalence is estimated at 2.5% in the Norwegian population.

Health tests are available for both eye diseases and autoimmune thyroiditis. A test for Addison's disease is available but it is only for one form of the disease and there are other forms which also affect the breed. A test is also available for one form of cleft palate that is exclusive to Tollers. Early testing shows a carrier rate of about 15%.

A survey conducted in 2002 by the Canadian breed club to discover which diseases and conditions occur in the Toller population, involving owners of 1180 dogs worldwide, showed 73% reported in excellent health and a total of 7.5% reporting poor or bad health. 141 dogs (12%) were reported as deceased with the average age at death being 6.4 years. The most common cause of death was cancer, reported in 25% of deaths, with old age being the next most common at 9%.

A worldwide study of the Tollers' registration history in 17 countries shows that about 90% of the genetic diversity present in the founding population has been lost. Tollers born between 1999–2008 have an effective founder size of 9.8, realized effective population size of 18 and an average inbreeding coefficient of 0.26. Breeders are working to prevent losing heterozygosity and to maintain sufficient genetic variations, but high kinship value means the breed is not able to maintain a steady level of inbreeding in the long term.