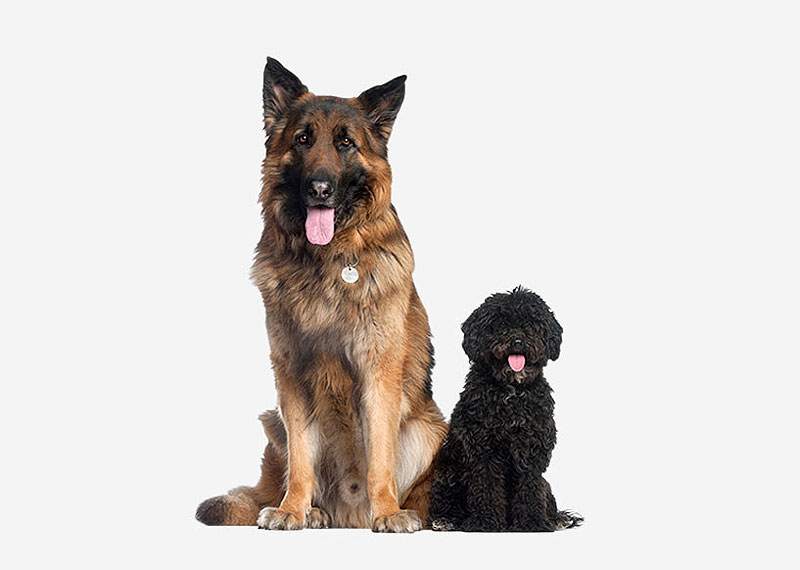 In Europe during the 1850s, attempts were being made to standardize breeds. The dogs were bred to preserve traits that assisted in their job of herding sheep and protecting flocks from predators. In Germany this was practiced within local communities, where shepherds selected and bred dogs. It was recognized that the breed had the necessary skills for herding sheep, such as intelligence, speed, strength and keen senses of smell. The results were dogs that were able to do such things, but that differed significantly, both in appearance and ability, from one locality to another.

To combat these differences, the Phylax Society was formed in 1891 with the intention of creating standardised development plans for native dog breeds in Germany. The society disbanded after only three years due to ongoing internal conflicts regarding the traits in dogs that the society should promote; some members believed dogs should be bred solely for working purposes, while others believed dogs should be bred also for appearance. While unsuccessful in their goal, the Phylax Society had inspired people to pursue standardising dog breeds independently.

With the rise of large, industrialized cities in Germany, the predator population began to decline, rendering sheepdogs unnecessary. At the same time, the awareness of sheepdogs as a versatile, intelligent class of canine began to rise. Max von Stephanitz, an ex-cavalry captain and former student of the Berlin Veterinary College, was an ex-member of the Phylax Society who firmly believed dogs should be bred for working. He admired the intelligence, strength and ability of Germany's native sheepdogs, but could not find any one single breed that satisfied him as the perfect working dog.

In 1899, Von Stephanitz was attending a dog show when he was shown a dog named Hektor Linksrhein. Hektor was the product of few generations of selective breeding and completely fulfilled what Von Stephanitz believed a working dog should be. He was pleased with the strength of the dog and was so taken by the animal's intelligence, loyalty and beauty, that he purchased him immediately. After purchasing the dog he changed his name to Horand von Grafrath and Von Stephanitz founded the Verein für Deutsche Schäferhunde (Society for the German Shepherd Dog). Horand was declared to be the first German Shepherd Dog and was the first dog added to the society's breed register.

Horand became the centre-point of the breeding programs and was bred with dogs belonging to other society members that displayed desirable traits and with dogs from Thuringia, Franconia and Wurttemberg. Fathering many pups, Horand's most successful was Hektor von Schwaben. Hektor was inbred with another of Horand's offspring and produced Heinz von Starkenburg, Beowulf and Pilot, who later fathered a total of eighty-four pups, mostly through being inbred with Hektor's other offspring. This inbreeding was deemed necessary in order to fix the traits being sought in the breed. In the original German Shepherd studbook, Zuchtbuch für Deutsche Schäferhunde (SZ), within the two pages of entries from SZ No. 41 to SZ No. 76, there are four Wolf Crosses. Beowulf's progeny also were inbred and it is from these pups that all German Shepherds draw a genetic link. It is believed the society accomplished its goal mostly due to Von Stephanitz's strong, uncompromising leadership and he is therefore credited with being the creator of the German Shepherd Dog.

The breed was named Deutscher Schäferhund by von Stephanitz, literally translating to "German Shepherd Dog". The breed was so named due to its original purpose of assisting shepherds in herding and protecting sheep. At the time, all other herding dogs in Germany were referred to by this name; they thus became known as Altdeutsche Schäferhunde or Old German Shepherd Dogs.

The direct translation of the name was adopted for use in the official breed registry; however, at the conclusion of World War I, it was believed that the inclusion of the word "German" would harm the breed's popularity, due to the anti-German sentiment of the era. The breed was officially renamed by the UK Kennel Club to "Alsatian Wolf Dog", after the French-German border area of Alsace-Lorraine. This name was also adopted by many other international kennel clubs.

Eventually, the appendage "wolf dog" was dropped, after numerous campaigns by breeders who were worried that becoming known as a wolf-dog hybrid would affect the breed's popularity and legality. The name Alsatian remained for five decades, until 1977, when successful campaigns by dog enthusiasts pressured the British kennel clubs to allow the breed to be registered again as German Shepherds. The word "Alsatian" still appeared in parentheses as part of the formal breed name and was only removed in 2010.

When the UK Kennel first accepted registrations for the breed in 1919, fifty-four dogs were registered and by 1926 this number had grown to over 8,000. The breed first gained international recognition after the decline of World War I, returning soldiers spoke highly of the breed and animal actors Rin Tin Tin and Strongheart popularised the breed further. The first German Shepherd Dog registered in the United States was Queen of Switzerland; however, her offspring suffered from defects as the result of poor breeding, which caused the breed to suffer a decline in popularity during the late 1920s.

Popularity increased again after the German Shepherd Sieger Pfeffer von Bern became the 1937 and 1938 Grand Victor in American Kennel club dog shows, only to suffer another decline at the conclusion of World War II, due to anti-German sentiment of the time. As time progressed, their popularity increased gradually until 1993, when they became the third most popular breed in the United States. As of 2012, the German Shepherd is the second most popular in the US. Additionally, the breed is typically among the most popular in other registries. The German Shepherd Dog's physique is very well suited to athletic competition. They commonly compete in shows and competitions such as agility trials.

Many common ailments of the German Shepherds are a result of the inbreeding practiced early in the breed's life. One such common ailment is hip and elbow dysplasia which may lead to the dog experiencing pain in later life and may cause arthritis. A study conducted by the University of Zurich found that 45% of the police working dogs were affected by degenerative spinal stenosis, although the sample studied was small. The Orthopedic Foundation for Animals found that 19.1% of German Shepherd are affected by hip dysplasia. Due to the large and open nature of their ears, German Shepherds are not prone to ear infections because there is no hair in the outer ear canal to hold debris or moisture. According to a recent survey in the UK, the median life span of German Shepherds is 10.95 years, which is normal for a dog of their size.

Degenerative myelopathy, a neurological disease, occurs with enough regularity specifically in the breed to suggest that the breed is predisposed to it. A very inexpensive DNA saliva test is now available to screen for Degenerative Myelopathy. The test screens for the mutated gene that has been seen in dogs with degenerative myelopathy. A small study in the UK showed 16% of young asymptomatic GSDs to be homozygous for the mutation, with a further 38% being carriers.[53] Now that a test is available the disease can be bred out of breeds with a high preponderance. The test is only recommended for predisposed breeds, but can be performed on DNA from any dog on samples collected through swabbing the inside of the animal's cheek with a sterile cotton swab. Now that there is a test available, prospective German Shepherd buyers can request the test from the breeder or buy from a breeder known to test their dogs.

Additionally, German Shepherds have a higher than normal incidence of Von Willebrand disease, a common inherited bleeding disorder. Exocrine pancreatic insufficiency (EPI), a degenerative disease of the pancreas. It is estimated that 1% of the UK GSD population suffers from this disease. Treatment is usually in the form of pancreatic supplements being given with food.

German Shepherds have been featured in a wide range of media. In 1921 Strongheart became one of the earliest canine film stars, and was followed in 1922 by Rin Tin Tin, who is considered the most famous German Shepherd. Both have stars on the Hollywood Walk of Fame. German Shepherds were used in the popular Canadian series The Littlest Hobo. Batman's dog Ace the Bat-Hound appeared in the Batman comic books, initially in 1955, through 1964. Between 1964 and 2007, his appearances were sporadic. A German Shepherd called Inspector Rex, is the star of Austrian Police procedural drama program, which won many awards, where German Shepherd Rex assists the Vienna Kriminalpolizei homicide unit. The show was aired in many languages. 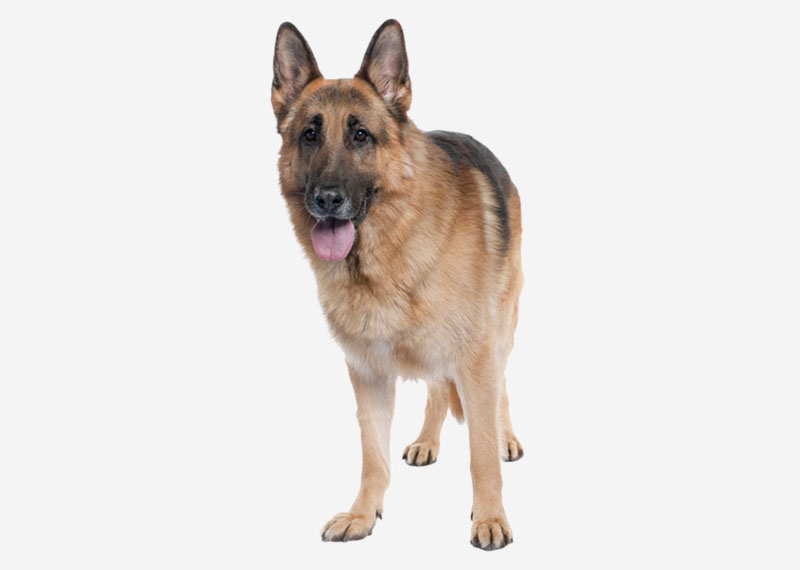 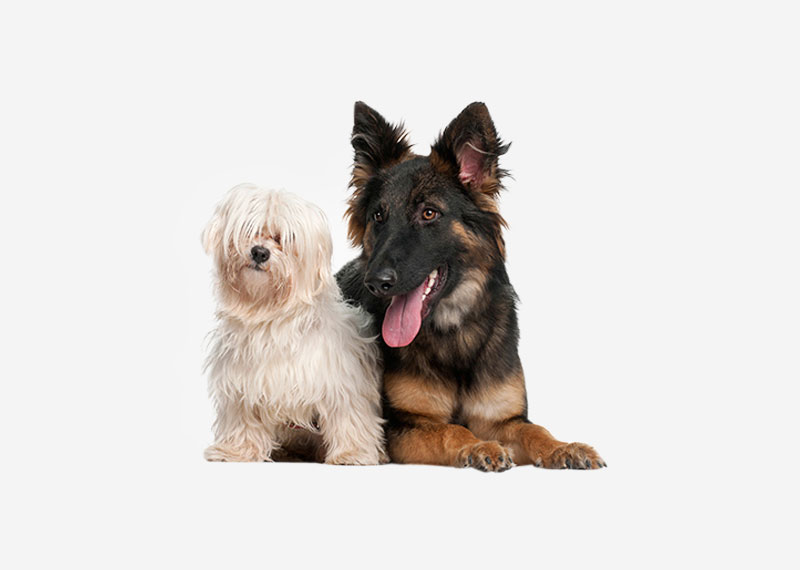 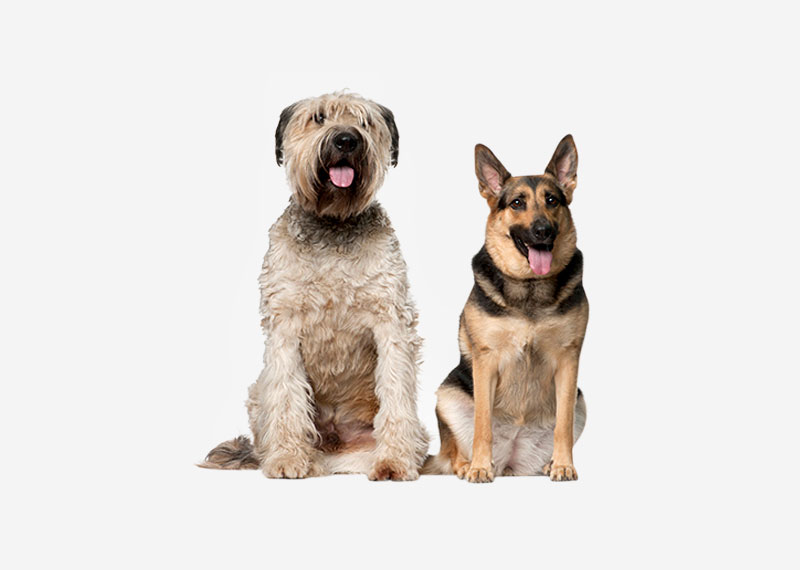