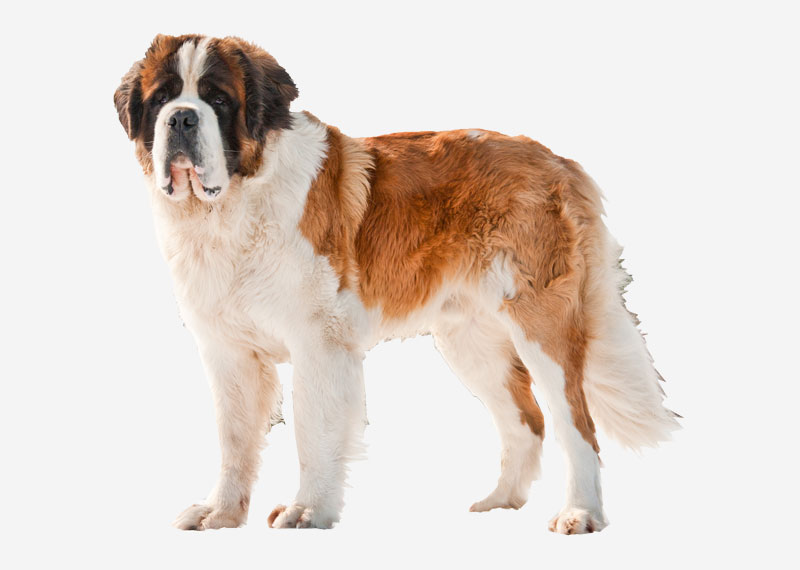 The St. Bernard or St Bernard (/ˈbɜrnərd/ or /bərˈnɑrd/) is a breed of very large working dog from the Italian and Swiss Alps, originally bred for rescue. The breed has become famous through tales of alpine rescues, as well as for its enormous size.

The ancestors of the St. Bernard share a history with the Sennenhunds, also called Swiss Mountain Dogs or Swiss Cattle Dogs, the large farm dogs of the farmers and dairymen of the livestock guardians, herding dogs, and draft dogs as well as hunting dogs, search and rescue dogs, and watchdogs. These dogs are thought to be descendants of molosser type dogs brought into the Alps by the ancient Romans, and the St. Bernard is recognized internationally today as one of the Molossoid breeds.

The earliest written records of the St. Bernard breed are from monks at the hospice at the Great St. Bernard Pass in 1707, with paintings and drawings of the dog dating even earlier.

The most famous St. Bernard to save people at the pass was Barry (sometimes spelled Berry), who reportedly saved somewhere between 40 and 100 lives. There is a monument to Barry in the Cimetière des Chiens, and his body was preserved in the Natural History Museum in Berne.

The classic St. Bernard looked very different from the St. Bernard of today because of cross-breeding. Severe winters from 1816 to 1818 led to increased numbers of avalanches, killing many of the dogs used for breeding while they were performing rescues. In an attempt to preserve the breed, the remaining St. Bernards were crossed with Newfoundlands brought from the Colony of Newfoundland in the 1850s, and so lost much of their use as rescue dogs in the snowy climate of the alps because the long fur they inherited would freeze and weigh them down.

The dogs never received any special training from the monks. Instead, younger dogs would learn how to perform search and rescue operations from older dogs.

The Swiss St. Bernard Club was founded in Basel on March 15, 1884. The St. Bernard was the very first breed entered into the Swiss Stud Book in 1884, and the breed standard was finally approved in 1888. Since then, the breed has been a Swiss national dog.

The name "St. Bernard" originates from the Great St. Bernard Hospice, a traveler's hospice on the often treacherous Great St. Bernard Pass in the Western Alps between Switzerland and Italy. The pass, the lodge, and the dogs are named for Bernard of Menthon, the 11th century monk who established the station.

"St. Bernard" wasn't in widespread use until the middle of the 19th century. The dogs were called "Saint Dogs", "Noble Steeds", "Alpenmastiff", or "Barry Dogs" before that time.

The breed is strikingly similar to the English Mastiff and Newfoundland. This can be attributed to a common shared ancestry with the Alpine Mastiff and the Tibetan Mastiff. It is suspected that these breeds were used to redevelop each other to combat the threat of their extinction after World War II.

St. Bernards share many characteristics of many Mountain dog breeds.

The very fast growth rate and the weight of a St. Bernard can lead to very serious deterioration of the bones if the dog does not get proper food and exercise. Many dogs are genetically affected by hip dysplasia or elbow dysplasia. Osteosarcoma (bone cancer) has been shown to be hereditary in the breed. They are susceptible to eye disorders called entropion and ectropion, in which the eyelid turns in or out. The breed standard indicates that this is a major fault. The breed is also susceptible to epilepsy and seizures, a heart disease called dilated cardiomyopathy, and eczema.

The famous Barry found a small boy in the snow and persuaded the boy to climb on his back, and then carried the boy to safety.

A St Bernard named Major is often credited with being the dog that helped save Manchester United, currently one of the world's largest football clubs, from financial ruin. The legend goes that in 1902 when the club owed sizable debts, the then captain Harry Stafford was showing off his prized St Bernard at a fund-raiser for the club when he was approached by a wealthy brewery owner, J.H.Davis, who enquired to buy the dog. Harry Stafford refused the offer but managed to convince him to buy the club thus saving Manchester United from going bankrupt.