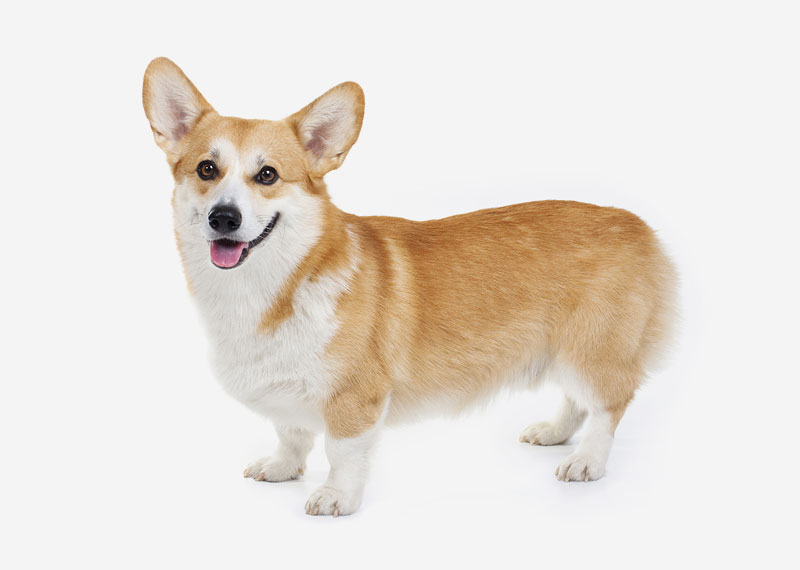 Pembroke Welsh Corgis are achondroplastic, meaning they are a "true dwarf" breed. As such, their stature and build can lead to certain non-inherited health conditions, but genetic issues should also be considered. Commonly, Pembrokes can suffer from monorchidism, Von Willebrand's disease, hip dysplasia (canine) and inherited eye problems such as progressive retinal atrophy. Genetic testing is available for Pembroke Welsh Corgis to avoid these issues and enhance the genetic health pool. Pembrokes are also prone to obesity given a characteristic, robust appetite of herding group breeds. Body weights above 38 pounds (17 kg) are not uncommon, but are not within a healthy range.[1] Most Pembroke Welsh Corgis require some degree of portion control and exercise.

The Pembroke Welsh Corgi lineage has been traced back as far as 1107 AD. It is said that the Vikings and Flemish weavers brought the dogs with them as they traveled to reside in Wales. As far back as the 10th century, Corgis were herding sheep, geese, ducks, horses and cattle as one of the oldest herding breed of dogs.

Pembroke Welsh Corgis are closely related to Schipperkes, Keeshonds, Pomeranians, Samoyeds, Chow Chows, Norwegian Elkhounds and Finnish Spitz. Pembrokes and Cardigans first appeared together in 1925 when they were shown under the rules of The Kennel Club in Britain. The Corgi Club was founded in December, 1925 in Carmarthen, Carmarthenshire. It is reported that the local members favored the Pembroke breed, so a club for Cardigan enthusiasts was founded a year or so later. Both groups have worked hard to ensure the appearance and type of breed are standardized through careful selective breeding. Pembrokes and Cardigans were officially recognized by the Kennel Club in 1928 and were initially categorized together under the single heading of Welsh Corgis, before the two breeds were recognized as separate and distinct in 1934.

Pembroke Welsh Corgis are becoming more popular in the United States and rank 24th in American Kennel Club registrations, as of 2012.

In the online series RWBY, Ruby and Yang have a Pembroke Welsh Corgi named Zwei, who is sent to them by their Father Taiyang.