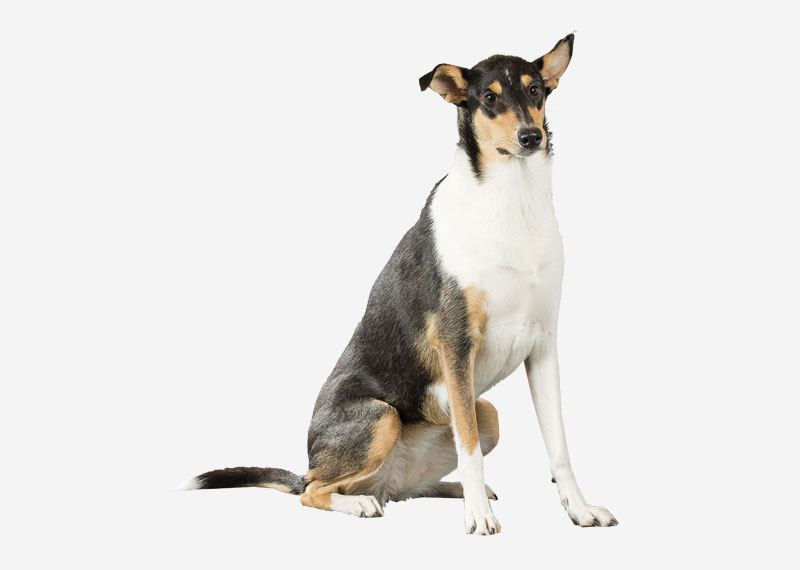 The Smooth Collie is a breed of dog developed originally for herding. It is a short-coated version of the Rough Collie of Lassie fame. Some breed organisations consider the smooth-coat and rough-coat dogs to be variations of the same breed.

The early history of the Smooth Collie, like that of many dog breeds, is largely a matter of speculation. The most common view of the breed is that they are descended from a population of shepherds' dogs brought to Scotland by the Romans around the 5th century. Even the origin of the breed's name is unclear, variously claimed to describe the early shepherd dog's dark colour ("coaly"), or derived from the name of a breed of sheep with black faces once commonly kept in Scotland ("Colley"), or derived from an Anglo-Saxon word meaning "useful." The word could also trace to Gaelic or/and Irish - in which the words for "doggie" are, respectively, càilean and cóilean. This would be more consistent with the breed's origin in the Gaelic-speaking Scottish Highlands than an Anglo-Saxon term.

The modern history of both the Smooth and Rough Collie began in the reign of Queen Victoria, who became interested in the shepherds' dogs while at Balmoral Castle in Scotland. In 1860, she purchased some of the dogs for her own kennel. With the Queen's interest, it became fashionable to own Smooth Collies. Thus began the breed's transformation from working farm dog, similar to the modern Border collie, to the dog bred as a pet and for the sport of conformation showing that we know today.

The Smooth Collie today is considered a variety of the same breed as the Rough Collie in the United States, meaning that they can interbreed and some statistics are kept only for "Collie" rather than for both varieties individually. The smooth and rough are classified as separate breeds in other countries, such as the United Kingdom, Canada, and Australia. The latter is a fairly recent development, however, with the Kennel Club (UK) allowing the interbreeding of the two varieties until 1993.

The Smooth Collie is a long-lived breed for its size, usually living 12 to 14 years. Like all dog breeds, they are susceptible to certain inherited or partially inherited health problems. Those problems currently include: