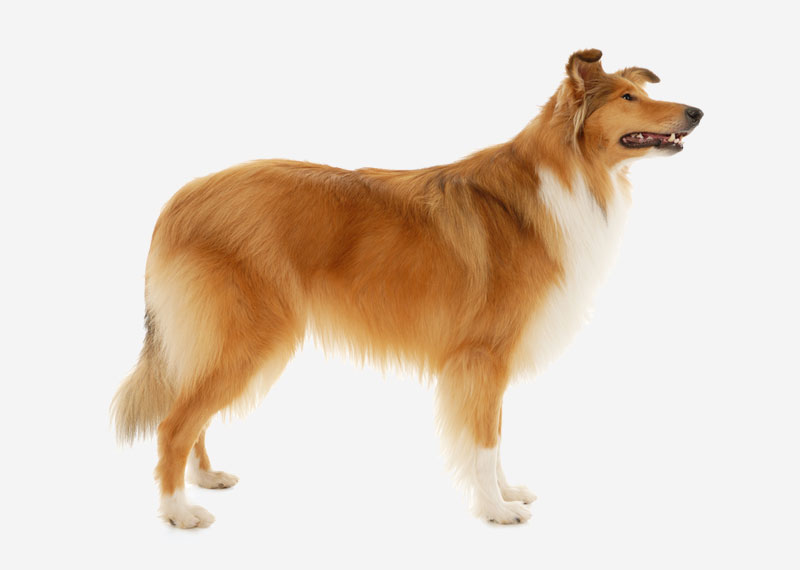 The Rough Collie (also known as the 'Long-Haired Collie') is a long coated breed of medium to large size dog that in its original form was a type of collie used and bred for herding in Scotland. Originating in the 1800s, it is now well known through the works of author Albert Payson Terhune, and through the Lassie novel, movies, and television shows. There is also a smooth-coated variety; some breed organisations, including both the American and the Canadian Kennel Clubs, consider the smooth-coat and rough-coat dogs to be variations of the same breed. Rough Collies generally come in shades of sable, merles, and tri-coloured. This breed is very similar to the smaller Shetland Sheepdog which is partly descended from the Rough Collie.

Both Rough and Smooth collies are descended from a localised variety of herding dog originating in Scotland and Wales. The Scottish variety was a large, strong, aggressive dog, bred to herd highland sheep. The Welsh variety was small and nimble, domesticated and friendly, and also herded goats. When the English saw these dogs at the Birmingham market, they interbred them with their own variety of sheepdogs producing a mixture of short and long haired varieties. After the industrial revolution, dog ownership became fashionable, and these early collies were believed to have been crossed with the Borzoi (Russian Wolfhound) to get a more "noble" head, which is today one of the true characteristics of the Rough Collie. It is not known conclusively if the Borzoi cross made it into the mainstream of the breed.

When Queen Victoria acquired a Rough Collie, after seeing one at Balmoral Castle, they were transformed into something of a fashion item. Continued breeding for show purposes drastically changed the appearance of the dogs; in the 1960s, it was a much taller dog than it is today (in the UK; in the US, the size standard has not been revised downward and dogs have remained between 24-26"). Earlier dogs were also more sturdy in build and reportedly capable of covering up to 100 miles in one day. In the UK the Rough Collie is no longer used for serious herding, having been replaced by the Border Collie. Though in the United States and a number of European countries, there has been a resurgence in the use of the Collie as a working and performance dog.

The Collie Club of America is one of the oldest breed-specific clubs in existence in the United States (founded in 1886). The Collie Club in England dates from 1881.

Quoted from Collie Club of America:

Unfortunately, the Collie's exact origins are shrouded in obscurity. It has been the subject of much research and speculation. The word "Collie" is as obscure as the breed itself. The name has been spelled many different ways: Coll, Colley, Coally and Coaly. Generally, the most accepted origin of the word is "Coll" - the Anglo-Saxon word for "black".

In the 18th century, the Rough Collie's natural home was in the highlands of Scotland, where he had been used for centuries as a sheepdog. The dogs were bred with great care in order to assist their masters in the herding and guarding of their flock.

Without a doubt, it is to the English fancy of the late 1800s that the breed owes its development as a popular show dog. Rough Collies were first exhibited in 1860 at the Birmingham, England dog show, in the generic class "Scotch Sheep-Dogs".

In 1879 the first English Rough Collie was imported to this country. It is from England that we find the famous pillars of the breed, from which the American fanciers sought not only their next big winner, but also their foundation stock.

By the turn of the century, the American Rough Collie was in a state of continued development. The breed continued to flourish in England. American show prizes were dominated by the British imports. As a result of the imports, the breed made rapid progress between 1900 to 1920. These dogs built the foundations upon which the present day Rough Collie is based and paved the way for the emergence of the great American kennels of the 1920s and 1930s

The word may trace to Gaelic or/and Irish - in which the words for "doggie" are, respectively, càilean and cóilean. This would be more consistent with the breed's origin in the Gaelic-speaking Scottish Highlands than an Anglo-Saxon term.

While Rough Collies are generally resilient and healthy, there are some health problems that can affect the breed.

Collie eye anomaly (CEA), a genetic disease which causes improper development of the eye and possible blindness, is a common ailment in the breed. More rarely, Rough Collies can be affected by progressive retinal atrophy (PRA), another genetic disease in which bilateral degeneration of the retina results in progressive vision loss culminating in blindness. Through genetic testing and careful screening program it would be theoretically possible to eradicate both of these problems in purebred lines, however, certainly in the UK, the Kennel Club does not require these tests to be done either for registration or showing. CEA is so prevalent that elimination of affected dogs except through very slow and careful breeding decisions to avoid shrinking the gene pool more than absolutely necessary. Rough Collie puppies should be screened at an early age (6–8 weeks) by a certified veterinary ophthalmologist to check for CEA. PRA has a later onset and can be detected by DNA test, but is much less widespread (in the US) than CEA. (In the UK, PRA is more common.) Note, the UK Kennel Club "Accredited Breeder Scheme" requires eye tests and recommends the genetic test for this class of members.

Canine cyclic neutropenia is a cyclic blood disorder that is usually fatal to affected puppies. The disease is also referred to as "gray collie syndrome", due to affected puppies having a pale gray, pinkish/gray or beige colouring, none of which are normal Rough Collie colours. Puppies that survive through adulthood are plagued with immune disorders throughout their lives and rarely live more than three years. DNA testing can help detect carriers of the recessive gene that causes the disease.

Hip dysplasia: As with most of the larger breeds, hip dysplasia is a potential concern for Rough Collies. Although this disease appears to be "multigene", careful selection by many breeders is reducing this problem. The UK Kennel Club "Accredited Breeder Scheme" requires hip-scores this class of members, however, a very small proportion of UK registered puppies are bred under this scheme. Hip dysplasia is rare in collies compared to their closest relatives and other breeds of the same size.

Rough Collies may carry a mutant Mdr1 gene that results in a sensitivity to Ivermectin and related drugs. A screening test is used to determine if alternative medications are required. Overdoses from the proscribed medications can result in neurological imparement or even death. This faulty gene is present in several breeds, but is well known among collies.

In addition to these problems, all of which can be tested for, there are a number of problems which are thought to be genetic but for which no screening test exists. These include epilepsy, bloat, a tendency towards allergies, and thyroid disorders (primarily hypothyroidism.). Because no DNA tests exist for these disorders (and all can have causes other than genetic origins), breeders can only do their best to avoid producing them by removing affected dogs from the gene pool.

The double layered coat needs to be brushed frequently and thoroughly to keep it in a show condition. Pet dogs need less maintenance but still a significant amount. The profuse coat picks up grass seeds and burrs, and many dogs tend to mat to some degree, particularly behind the ears, around the collar (if a collar is left on the dog), and in the pants. Shaving collies is very bad for their skin and some do not regrow any significant amount of hair after being shaved. Spaying and neutering can alter coat texture, making it softer and more prone to matting.