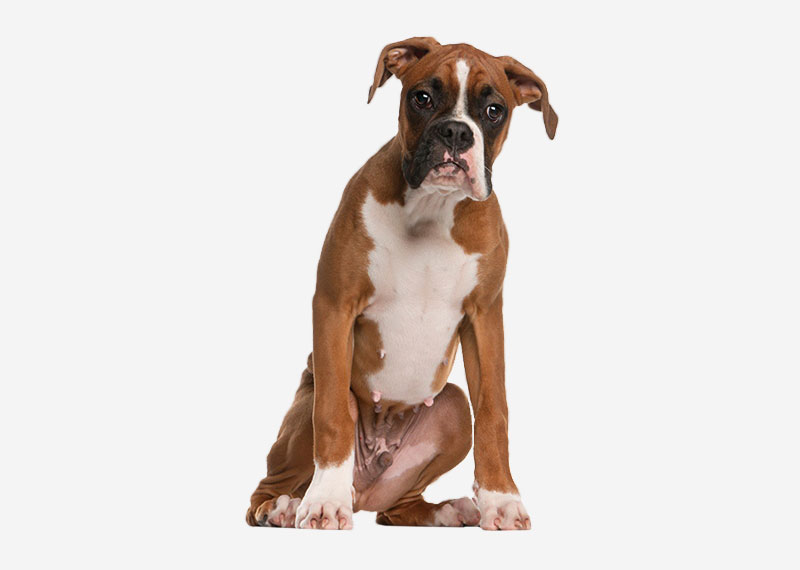 The Boxer is a breed of medium-sized, short-haired dogs developed in Germany. Their coat is smooth and tight-fitting; colors are fawn or brindled, with or without white markings, which may cover the entire body, and white. Boxers are brachycephalic (they have broad, short skulls), have a square muzzle, mandibular prognathism (an underbite), very strong jaws, and a powerful bite ideal for hanging on to large prey. The Boxer was bred from the Old English Bulldog and the now extinct Bullenbeisser, and is part of the Molosser group. The Boxer is a member of the Working Group.

Boxers were first exhibited in a dog show for St. Bernards in Munich in 1895, the first Boxer club being founded the next year. Based on 2013 American Kennel Club statistics, Boxers held steady as the seventh most popular breed of dog in the United States for the fourth consecutive year.

The Boxer is part of the Molosser dog group, developed in Germany in the late 19th century from the now extinct Bullenbeisser, a dog of Mastiff descent, and Bulldogs brought in from Great Britain. The Bullenbeisser had been working as a hunting dog for centuries, employed in the pursuit of bear, wild boar, and deer. Its task was to seize the prey and hold it until the hunters arrived. In later years, faster dogs were favored and a smaller Bullenbeisser was bred in Brabant, in northern Belgium. It is generally accepted that the Brabanter Bullenbeisser was a direct ancestor of today's Boxer. In 1894, three Germans by the names of Friedrich Robert, Elard König, and R. Höpner decided to stabilize the breed and put it on exhibition at a dog show. This was done in Munich in 1895, and the next year they founded the first Boxer Club, the Deutscher Boxer Club. The Club went on to publish the first Boxer breed standard in 1902, a detailed document that has not been changed much to this day.

The breed was introduced to other parts of Europe in the late 19th century and to the United States around the turn of the 20th century. The American Kennel Club (AKC) registered the first Boxer in 1904, and recognized the first Boxer champion, Dampf vom Dom, in 1915. During World War I, the Boxer was co-opted for military work, acting as a valuable messenger dog, pack-carrier, attack dog, and guard dog. It was not until after World War II that the Boxer became popular around the world. Taken home by returning soldiers, they introduced the dog to a wider audience and soon became a favorite as a companion, a show dog, and a guard dog.

The German citizen George Alt, a Munich resident, mated a brindle-colored bitch imported from France named Flora with a local dog of unknown ancestry, known simply as "Boxer", resulting in a fawn-and-white male, named "Lechner's Box" after its owner. This dog was mated with his own dam Flora, and one of its offspring was a bitch called Alt's Schecken. George Alt mated Schecken with a Bulldog named Dr. Toneissen's Tom to produce the historically significant dog Mühlbauer's Flocki. Flocki was the first Boxer to enter the German Stud Book after winning the aforementioned show for St. Bernards in Munich 1895, which was the first event to have a class specific for Boxers.

The white bitch Ch. Blanka von Angertor, Flocki's sister, was even more influential when mated with Piccolo von Angertor (Lechner's Box grandson) to produce the predominantly white (parti-colored) bitch Meta von der Passage, which, even bearing little resemblance with the modern Boxer standard (early photographs depicts her as too long, weak-backed and down-faced), is considered the mother of the breed. John Wagner, in The Boxer (first published in 1939) said the following regarding this bitch:

Meta von der Passage played the most important role of the five original ancestors. Our great line of sires all trace directly back to this female. She was a substantially built, low to the ground, brindle and white parti-color, lacking in underjaw and exceedingly lippy. As a producing female few in any breed can match her record. She consistently whelped puppies of marvelous type and rare quality. Those of her offspring sired by Flock St. Salvator and Wotan dominate all present-day pedigrees. Combined with Wotan and Mirzl children, they made the Boxer.

The name "Boxer" is supposedly derived from the breed's tendency to play by standing on its hind legs and "boxing" with its front paws. According to Andrew H. Brace's Pet owner's guide to the Boxer, this theory is the least plausible explanation. He claims "it's unlikely that a nation so permeated with nationalism would give to one of its most famous breeds a name so obviously anglicised".

German linguistic and historical evidence find the earliest written source for the word Boxer in the 18th century, where it is found in a text in the Deutsches Fremdwörterbuch (The German Dictionary of Foreign Words), which cites an author named Musäus of 1782 writing "daß er aus Furcht vor dem großen Baxer Salmonet ... sich auf einige Tage in ein geräumiges Packfaß ... absentiret hatte". At that time the spelling "baxer" equalled "boxer". Both the verb (boxen [English "to box, to punch, to jab"]) and the noun (Boxer) were common German words as early as the late 18th century. The term Boxl, also written Buxn or Buchsen in the Bavarian dialect, means "short (leather) trousers" or "underwear". The very similar-sounding term Boxerl, also from the Bavarian dialect, is an endearing term for Boxer. More in line with historical facts, Brace states that there exist many other theories to explain the origin of the breed name, from which he favors the one claiming the smaller Bullenbeisser (Brabanter) were also known as "Boxl" and that Boxer is just a corruption of that word.

In the same vein runs a theory based on the fact that there were a group of dogs known as Bierboxer in Munich by the time of the breed's development. These dogs were the result from mixes of Bullenbeisser and other similar breeds. Bier (beer) probably refers to the Biergarten, the typical Munich beergarden, an open-air restaurant where people used to take their dogs along. The nickname "Deutscher Boxer" was derived from bierboxer and Boxer could also be a corruption of the former or a contraction of the latter.

A passage from the book "The Complete Boxer" by Milo G Denlinger states:

It has been claimed that the name "Boxer" was jokingly applied by an English traveler who noted a tendency of the dog to use its paws in fighting. This seems improbable. Any such action would likely result in a badly bitten if not broken leg. On the other hand, a German breeder of forty years' experience states positively that the Boxer does not use his feet, except to try and extinguish a small flame such as a burning match. But a Boxer does box with his head. He will hit (not bite) a cat with his muzzle hard enough to knock it out and he will box a ball with his nose. Or perhaps, since the German dictionary translates 'boxer' as 'prize-fighter' the name was bestowed in appreciation of the fighting qualities of the breed rather than its technique.

Boxer is also the name of a dog owned by John Peerybingle, the main character in the best-selling 1845 book The Cricket on the Hearth by Charles Dickens, which is evidence that "Boxer" was commonly used as a dog name by the early 19th century, before the establishment of the breed by the end of that same century.

The name of the breed could also be simply due to the names of the very first known specimens of the breed (Lechner's Box, for instance).

Leading health issues to which Boxers are prone include cancers, heart conditions such as Aortic Stenosis and Arrhythmogenic Right Ventricular Cardiomyopathy (the so-called "Boxer Cardiomyopathy"), hypothyroidism, hip dysplasia, and degenerative myelopathy and epilepsy; other conditions that may be seen are gastric dilatation and torsion (bloat), intestinal problems, and allergies (although these may be more related to diet than breed). Entropion, a malformation of the eyelid requiring surgical correction, is occasionally seen, and some lines have a tendency toward spondylosis deformans, a fusing of the spine, or dystocia. Other conditions that are less common but occur more often in Boxers than other breeds are hystiocytic ulcerative colitis (sometimes called Boxer colitis), an invasive E. coli infection, and indolent corneal ulcers, often called Boxer eye ulcers.

According to a UK Kennel Club health survey, cancer accounts for 38.5% of Boxer deaths, followed by old age (21.5%), cardiac (6.9%) and gastrointestinal (6.9%) related issues. Median lifespan was 10.25 years. Responsible breeders use available tests to screen their breeding stock before breeding, and in some cases throughout the life of the dog, in an attempt to minimize the occurrence of these diseases in future generations.

Boxers are known to be very sensitive to the hypotensive and bradycardiac effects of a commonly used veterinary sedative, acepromazine. It is recommended that the drug be avoided in the Boxer breed.

As an athletic breed, proper exercise and conditioning is important for the continued health and longevity of the Boxer. Care must be taken not to over-exercise young dogs, as this may damage growing bones; however once mature Boxers can be excellent jogging or running companions. Because of their brachycephalic head, they do not do well with high heat or humidity, and common sense should prevail when exercising a Boxer in these conditions. 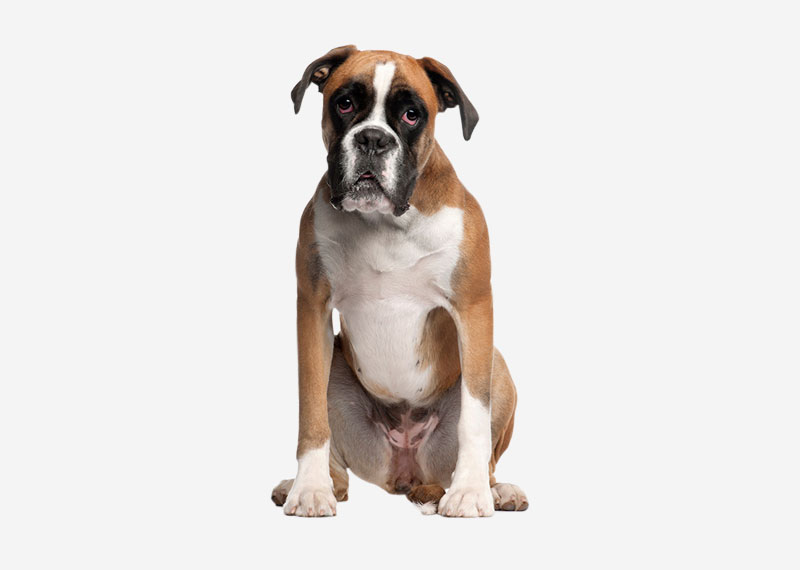 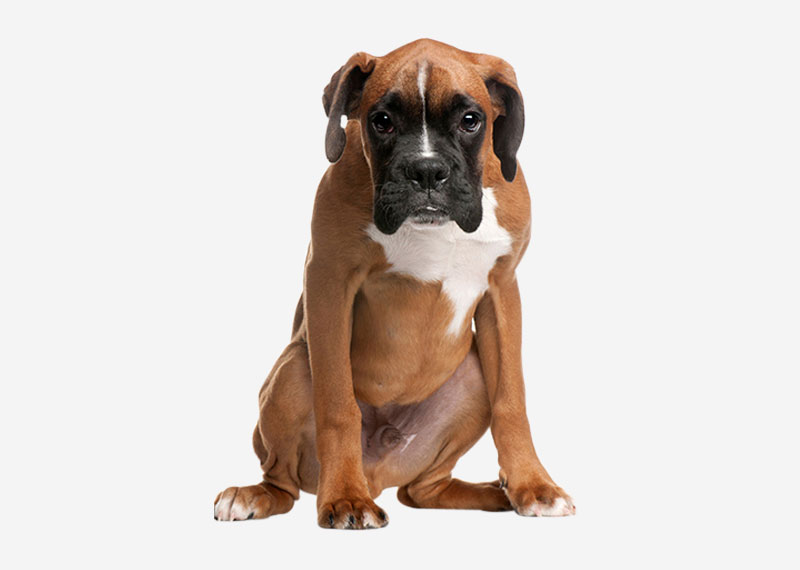 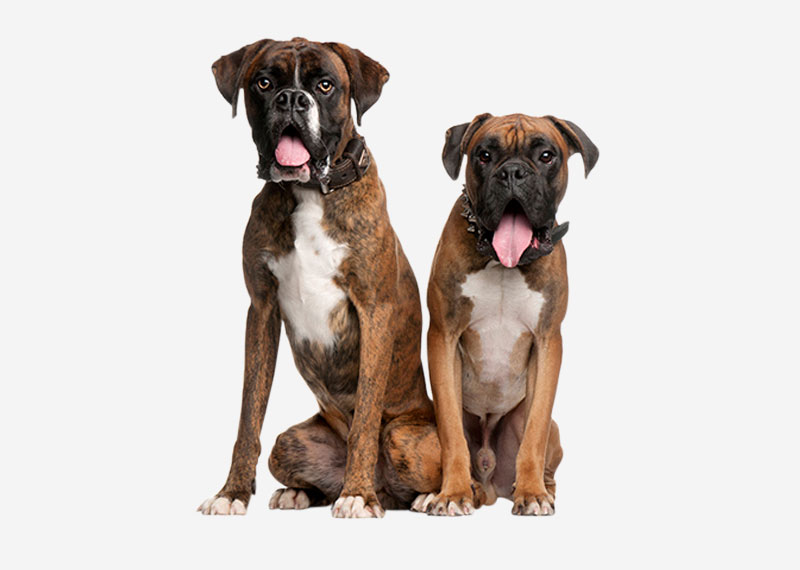 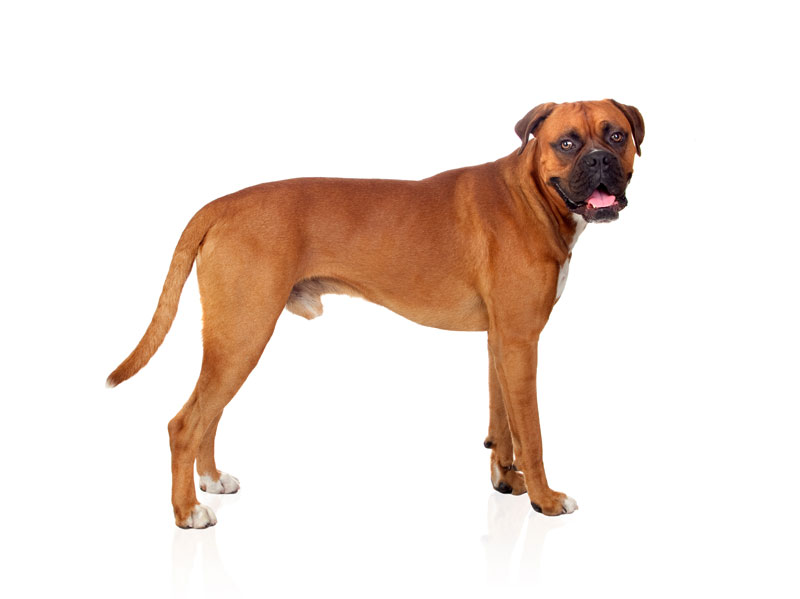 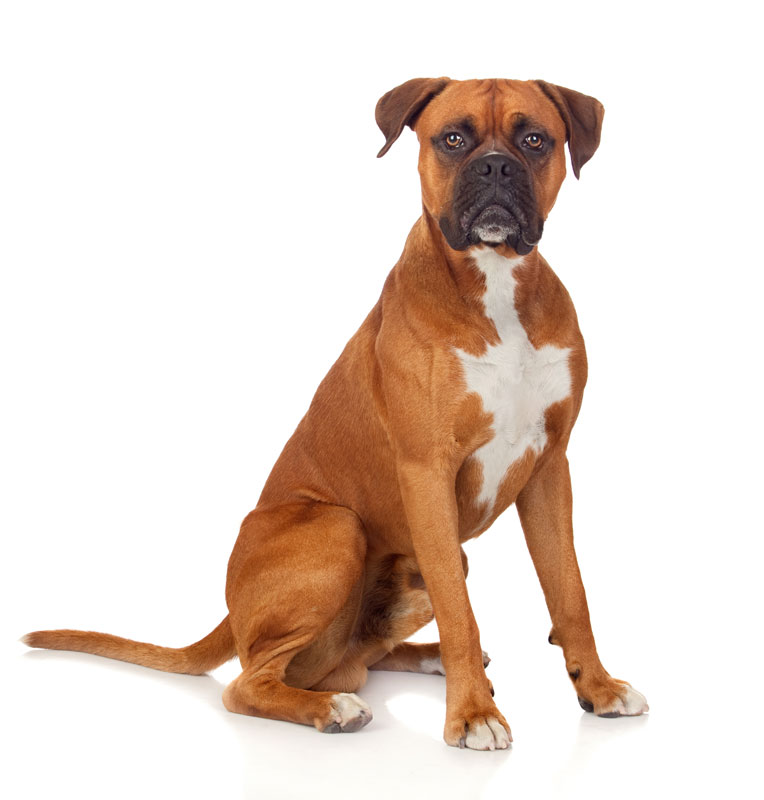