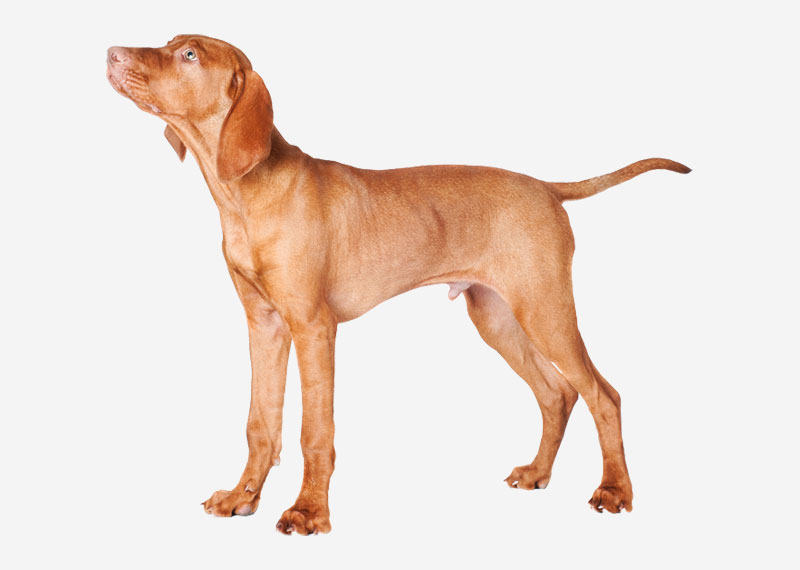 The Wirehaired Vizsla; English plural: Vizslas or sometimes Vizslak, based on the Hungarian plural vizslák ), is a dog breed originating in Hungary. Wirehaired Vizslas are known as excellent hunting dogs, and also have a level personality making them suited for families. The Wirehaired Vizsla is a versatile, natural hunter endowed with an excellent nose and an above average trainability. Although they are lively, gentle mannered, demonstrably affectionate and sensitive, they are also fearless and possessed of a well-developed protective instinct. The breed has a firmness on point, is an excellent retriever, and has the determination to remain on the scent even when swimming. The overall appearance embodies the qualities of a multi-purpose pointing dog, endurance, working ability and an easily satisfied nature. This is a dog of power and drive in the field, yet is a tractable and affectionate companion in the home.

The less usual Wirehaired Vizsla is a completely separate breed from its more commonly seen smooth-coated cousin. The Wirehaired Vizsla was developed in the 1930s, initially by Vasas Jozsef, owner of the Csabai vizsla kennel along with Gresznarik Laszlo, who owned the de Selle German Wirehaired Pointer kennel. Their aim was to produce a dog that combined the color of the Vizsla with a heavier coat, and a more substantial frame, better suited for working in cold weather and retrieving from icy water.Two Vizsla bitches (Zsuzsi and Csibi), both of whom combined excellent pedigrees with good working ability, were selected to breed with a totally liver colored German Wirehaired Pointer sire (Astor von Potat). Zsuzsi’s sire was known to have offspring with longer coats. The best of Zsuzsi’s and Csibi’s offspring were selected and bred together and Dia de Selle, the first WHV to be exhibited, was born. She had the same body as the shorthaired vizsla, but her head was the shape of the German Wirehaired Pointer. While her coat was not rough and thick enough, she was the promising beginning of the creation of the new breed.Anecdotal history suggests the added infusion of Pudelpointer, Bloodhound and Irish Setter blood during the period of the Second World War when many other Hungarian kennels became involved in the development of the breed. It has also previously, but incorrectly been suggested that the breed was created by backbreeding of smooth Vizsla's most heavily coated offspring (Gottlieb,idem).The Wirehaired Vizsla was recognized in Europe by the Fédération Cynologique Internationale under the Hungarian standard in 1986. It is also recognized by the KC (UK). Introduced to North America in the 1970s, the WHV was first recognized by the Canadian Kennel Club in 1977 and in 1986. The breed was recognized by the UKC (United Kennel Club)in 2006.
They are also recognized by in North America by the ARBA (American Rare Breed Association), as well as American Field (Field Dog Stud Book) registries.The breed was admitted into AKC's (FSS) in 2008. Effective Jan. 1, 2009, the Wirehaired Vizsla became eligible to compete in AKC Companion and Performance Events. As of January 1, 2011, the Wirehaired Vizsla has been allowed to show in conformation, in the AKC Miscellaneous Class. http://www.akc.org/reg/fss_news.cfm
As of July 2, 2014, the Wirehaired Vizsla will be admitted into the American Kennel Club Sporting Group as a fully recognized breed.

There are approximately 400-450 Wirehaired Vizslas in the US and between 2500 and 3000 worldwide. It was recognized by the Australian National Kennel Council in 2007.