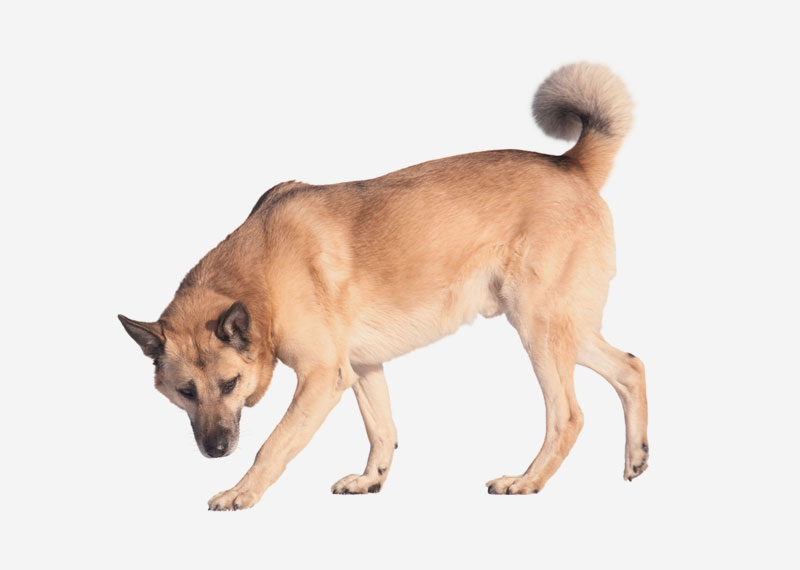 The West Siberian Laika or WSL, is a breed of hunting dog. Russian publications indicate that the term West Siberian Laika loosely applied to hunting dogs originating with the Mansi and Khanty people in Ural (region) and West Siberian Plain, but there were no standards or registrations of WSL as such until 1930. Then World War II disrupted it for a while, but systematic breeding with registrations resumed after the war ended, in 1946. This was the time the breed began taking modern shape. Before that hunters only knew of Mansi people Laika and Khanty people Laika. In early 1960 many hunters in Ural still preferred the term Mansi Laika, when speaking of West Siberian Laika. In Russian language, the term Laika originated from the word layat that means to bark. The word Laika simply means a dog that barks. Any hunting Laika is a bark pointer (pointing at animal of interest by barking and staying with the animal ). It is a versatile dog depending on use and environment, but in certain parts of the country they have become more specialized.

Deforestation of land for agriculture and industrialization in later 19th-early 20th Centuries accelerated replacement of Laikas with other popular at the time dogs. Russian experts of the late 19th century distinguished dozens of varieties of aboriginal Laikas, each associated with a particular ethnic group of indigenous people of northeastern Europe and Siberia, but none of them had been considered as purebred and pedigreed. Russians tried to save some hunting Laikas from extinction by bringing them from different provincial parts of Russia in cities of European part of the country and breeding them pure. Starting from thirtieth and especially after WW II, they established four breeds as purebreds: the Karelo-Finnish Laika, the Russ-European Laika, the West Siberian Laika and the East Siberian Laika. They all are bark-pointing dogs and their hunting behavior is generally similar. All of them are descendants of aboriginal types of Laikas selectively sampled from large territories and lumped into the four breeds for breeding in kennels. Among all of them, the West Siberian Laika became most popular and by present time it is most numerous Laika far beyond its original range in Russia.