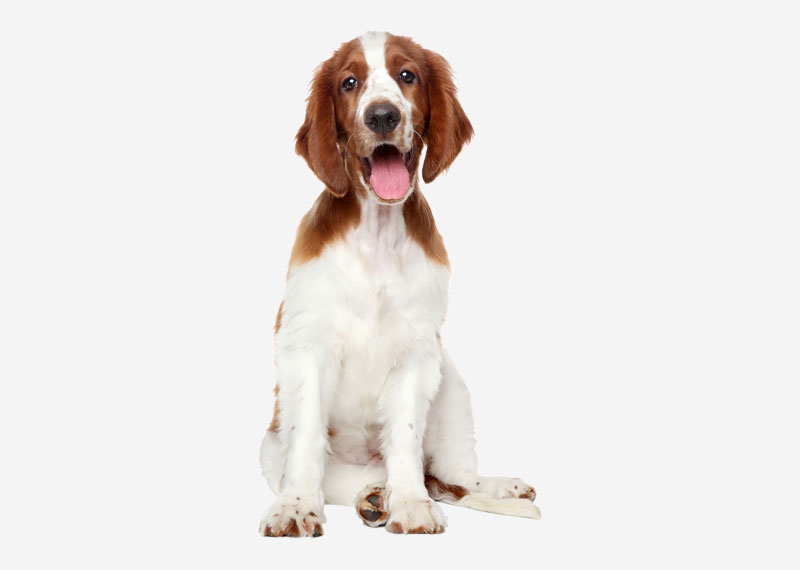 The Welsh Springer Spaniel is a breed of dog and a member of the spaniel family. Thought to be comparable to the old Land Spaniel, they are similar to the English Springer Spaniel and historically have been referred to as both the Welsh Spaniel and the Welsh Cocker Spaniel. They were relatively unknown until a succession of victories in dog trials by the breed increased its popularity. Following recognition by The Kennel Club in 1902, the breed gained the modern name of Welsh Springer Spaniel. The breed's coat only comes in a single colour combination of white with red markings, usually in a piebald pattern. Loyal and affectionate, they can become very attached to family members and are wary of strangers. Health conditions are limited to those common among many breeds of dog, although they are affected more than average by Hip dysplasia (canine) and some eye conditions. They are a working dog, bred for hunting, and while not as rare as some varieties of spaniel, they are rarer than the more widely known English Springer Spaniel with which they are sometimes confused.

The actual date of origin of the Welsh Springer Spaniel cannot be traced, however dogs resembling the breed with its distinctive red and white coat are frequently depicted in old pictures and prints. This type of dog was known as the Land Spaniel, and is considered to be similar to the modern Welsh Springer. John Caius, writing in 1570 said "Spaniels whose skynnes are white and if marked with any spottes they are commonly red". and was known as the Welsh Cocker. During the 19th century were several different varieties of Cocker Spaniel, including the English, the Welsh and the Devonshire as the term was used to describe the size of the dog rather than the breed. Unusually, in John George Wood's 1865 book The Illustrated Natural History, an image is described showing a Welsh Cocker Spaniel as a solid coloured dark spaniel. The same inscription is used in the 1867 work The Dog in Health and Disease by John Henry Walsh and he further describes the Welsh Cocker and the Devonshire Cocker as "both being of a deep-liver colour". The Welsh Springer was relatively unknown during the 19th Century, but this changed in 1900 when Mr. A. T. Williams of Ynis-y-Gerwn won the team stake at the Sporting Spaniel Club Trials. The trials were held on Mr. Williams' own estate, and it was thought that when his team defeated eight well known teams it was because of the home advantage. This was disproved when dogs from the same kennel went on to win in successive years around the UK.Welsh Springers were recognised by The Kennel Club, after the breed had gained popularity, in 1902 under the new name of Welsh Springer Spaniel.World War I caused problems for the breed in the United Kingdom, and when the war was over there were no dogs whose parents had registered pedigrees. The breed restarted with the remaining unregistered dogs, and it is these dogs that formed the modern day breed. The breeders in the 1920s and 1930s developed these dogs into the type of Welsh Springer Spaniel which remains today. The Welsh Springer Spaniel Club (UK) was formed in 1923, registrations slowly increased between the wars but all records held by the breed club were destroyed in an air raid during World War II. Numbers remained steady, with 420 Welsh Springer Spaniels being registered in 2004, however numbers of English Springer Spaniels increased to 14,765 and English Cocker Spaniels to 16,608. Numbers remain closer to the American Cocker Spaniel which registered 610 in 2000, and 599 in 2004. The breed remains more popular than some other breeds of Spaniel, including the Clumber Spaniel, Field Spaniel, Sussex Spaniel and Irish Water Spaniel. The build of the Welsh Springer Spaniel should be slightly off square, meaning that the length of the dog should be slightly greater than the height at the withers. However, some dogs may be square, and this is not penalised in the conformation show as long as the height is never greater than the length. Traditionally a docking breed, dependant on legislation in the country of origin, In showing, a scissors bite is preferred with an undershot jaw severely penalised.Male dogs are 45.7cm - 48.3cm high at the withers, with females a little smaller at 43.2cm - 45.7cm. On average, members of the breed weigh between 43.2cm - 45.7cm. The back of the legs, chest, and underside of the body are feathered, and the ears and tail are lightly feathered. The only colour is a rich red-and-white. Any pattern is acceptable and any white area may be flecked with red ticking. The colours of the Welsh Springer, while exclusive from the English Springer, appear in the Brittany Spaniel and the Brittany and Welsh Springers are both of similar sizes. The Welsh Springer is larger than the English Cocker Spaniel.The breed is quick to learn but can be headstrong, though with correct training can become very obedient. The Welsh Springer was bred for working dog and endurance, and as with many breeds of hunting dogs requires a regular exercise routine to keep them healthy and content. Without adequate exercise, a Welsh Springer Spaniel may appear hyperactive.

The Welsh Springer is generally a healthy breed, but some can suffer conditions common to many breeds such as Hip dysplasia (canine), Canine glaucoma and like other dogs with pendulous ears, they are prone to ear infections such as otitis externa. In a survey of over a hundred breeds of dog conducted in 1997, the Welsh Springer Spaniel was ranked 14th for worst hip score, with the average score of the breed being 18.45. The average lifespan is 12 to 15 years.Narrow/closed angle glaucoma is an autosomal dominant inheritable trait in the breed. It is a leading cause of blindness in dogs, and is where there is increased fluid pressure within the eye. If the fluid is not reduced, the pressure causes permanent damage to the retina and optic nerve. Loss of eyesight can happen as quickly as within 24 hours if the pressure if elevated enough or slowly over time if it is only a mild elevation. The sudden, rapid elevation of pressure is more common with narrow/closed angle glaucoma which is more common to the breed than the slower open angle glaucoma. Symptoms can include redness in the eye, the eye itself looking cloudy, sensitivity to light and the dog may rub at their eye or even rub it along other objects and carpet as the condition is moderate to extremely painful. Treatment can vary depending on the severity of the condition but if inherited glaucoma appears in one eye then it usually occurs in the other eye eventually.