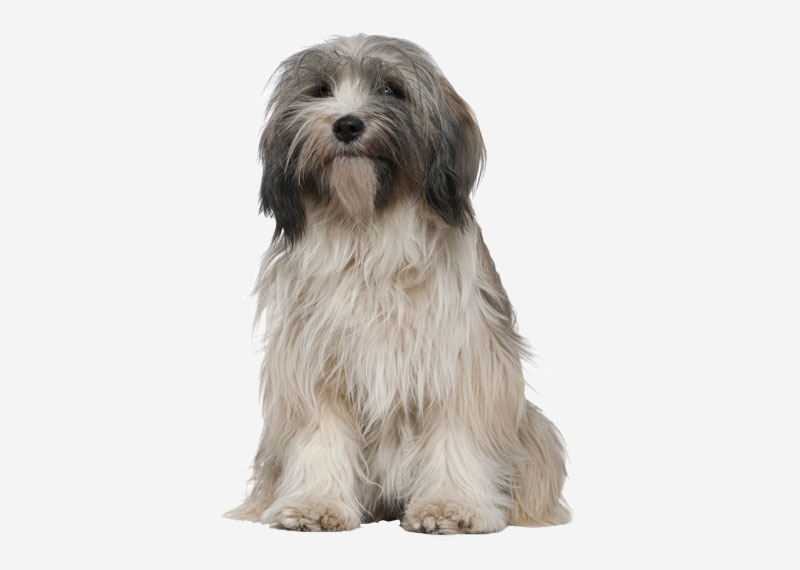 The Tibetan Terrier is a medium-size breed of dog originated in Tibet. Despite its name, it is not a member of the terrier group. The breed acquired its name from European travelers who first encountered the breed due to its resemblance to terriers. The Standard Tibetan name for the breed, Tsang Apso, roughly translates to "shaggy or bearded (apso) dog, from the province of Ü-Tsang". Some old travelers' accounts give the name Dokhi Apso or "outdoor" Apso, indicating a working dog which lives outdoors.Bred and raised in monasteries by lamas over 2000 years ago, Tibetan Terriers were kept as good luck charms, mascots, watchdogs, and companions. In addition to herding sheep, they were also used to retrieve articles that fell below mountain sides.Known as the "Holy Dogs of Tibet", they were never sold but only given as gifts by monks to promote good fortune. As such, the early history of the breed is linked to only a handful of Origin of the domestic dog. Recent DNA analysis has concluded that the Tibetan Terrier is descended from the most ancient dog breeds.

A UK Kennel Club survey puts the average lifespan of the breed at 12 years. About one in five lives to 15 years or more, with the longest-lived Tibetan terrier having lived to 18.25 years.Though an athletic breed that has been bred for a natural look, the Tibetan terrier is still susceptible to a variety of health problems, especially those related to the eyes and joints. These health problems can include canine Hip dysplasia (canine), luxating patella, progressive retinal atrophy, lens luxation, cataracts and heart murmurs. Tibetans also have a history of being somewhat allergic to dairy, wheat and grains. Because of these potential health conditions Tibetan terrier clubs recommend purchasing from breeders who participate in eye and hip testing, such as the Canine Eye Registration Foundation (CERF) and Orthopedic Foundation for Animals (OFA).In addition, Tibetan Terriers can carry the genetic disease canine neuronal ceroid lipofuscinosis, called Batten disease in humans. Research is on-going to find the gene(s) responsible for this progressive disease in both Tibetan terriers and humans. A DNA test has been developed to identify this gene in several breeds of dog, including the Tibetan terrier.