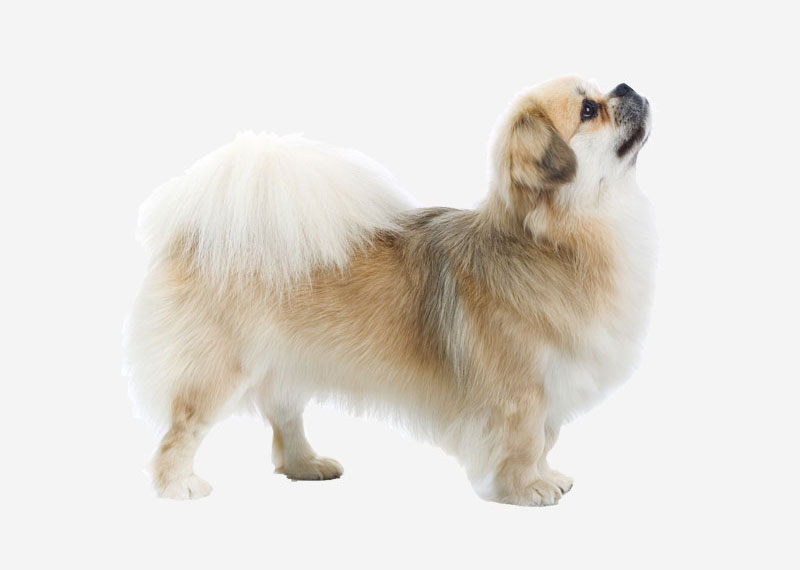 The Tibetan Spaniel is a breed of assertive, small, intelligent dogs originating over 2,500 years ago in the Himalaya of Tibet. They share ancestry with the Pekingese, Japanese Chin, Shih Tzu, Lhasa Apso, and Pug. This breed is not a true spaniel; its breeding and role differs quite a bit. (Spaniels are gun dogs.) The spaniel name may have been given due to its resemblance to the bred-down Lap dog versions of the hunting spaniels, such as the Cavalier King Charles Spaniel."The Tibetan Spaniels are also called "Simkhyi", which means house dog, room dog or even bedroom dog. They are the dog of highest order and are being kept as Lama dogs or with aristocrats. The Tibetan Spaniel is a lively dog with a good length of nose." - Venerable Gonsar Rinpoche

Small monastery dogs, thought to be early representatives of the Tibetan Spaniel, loyally trailed behind their Lama masters and came to be regarded as "Foo Dog" owing to their resemblance to the Chinese guardian lions that gave them great value and prestige. The practice of sending the dogs as gifts to the palaces of China and other Buddhist countries grew significantly, and more "lion dogs" were presented back to Tibet, continuing until as late as 1908. As a result of exchanges of Tibetan Spaniels between palaces and monasteries, the breed is likely to have common ancestors with Oriental breeds such as the Japanese Chin and the Pekingese. Not only was the Tibetan Spaniel prized as a pet and companion, it was a useful member of Tibetan monastic life. The little dogs would sit on the monastery walls, keeping watch over the countryside. Their keen eyesight and ability to see great distances made them excellent watchdogs. They would alarm bark to alert the monks and the Tibetan Mastiffs below. In addition to functioning as lookouts, the Tibetan Spaniels were trained to spin the monk's prayer wheels. They also slept with the monks at night to provide warmth.Village-bred Tibetan Spaniels varied greatly in size and type, and the smaller puppies were usually given as gifts to the monasteries. In turn, these smaller dogs used in the monastery breeding programs were probably combined with the more elegant Tibetan Spaniel-type dogs brought from China. Those bred closer to the Chinese borders were characterized by shorter muzzles.

Tibetan Spaniels were being bred in the United Kingdom by the 1890s. The first authenticated reference we find to Tibetan Spaniels in the United States is a litter born out of two imported dogs from a Tibetan monastery in 1965. In January 1971, the Tibetan Spaniel Club of America was formed with 14 charter members. An open secondary registry was maintained. After a period in the Miscellaneous classes, the Tibetan Spaniel was accepted for American Kennel Club registration and became eligible to compete as a Non-Sporting breed, effective January 1, 1984. The breed was recognized by the Fédération Cynologique Internationale in 1987 and placed in Group 9 Companion and Toy Dogs, Section 5 : Tibetan breeds.

Professor Ludvic von Schulmuth studied the origins of skeletal remains of dogs in human settlements as old as ten thousand years. The Professor created a genealogical tree of Tibetan dogs. It shows that the Gobi Desert Kitchen Midden Dog, a small scavenger, evolved into the Small Soft-Coated Drop-Eared Hunting Dog which then evolved into the Tibetan Spaniel, Pekingese, and Japanese Chin. Intermixing of the Tibetan Spaniel with the Tibetan breeds Lhasa Apso and Shih Tzu resulted in both the latter breeds birthing the occasional "Prapso", a pup with a shedding coat closely resembling the Tibetan Spaniel.

The Tibetan Spaniel is a generally healthy dog with a life expectancy of 13–16 years.

Progressive retinal atrophy is a genetic disease that can occur in the breed. The disease is an inherited form of blindness in dogs that has in two forms: generalized PRA and central PRA. Generalized PRA is primarily a photoreceptor disease and is the form found in Tibetan Spaniels. The clinical signs have been observed between 1½ and 4 years, but as late at seven years. The disease is painless and affected dogs become completely blind. Currently there is no treatment, but affected dogs generally adapt well to their progressive blindness.The earliest clinical sign of progressive retinal atrophy is "night blindness." The dog cannot see well in a dimly lit room or at dusk. The dog will show a reluctance to move from a lighted area into darker surroundings. The night blindness develops progressively into complete blindness. The British institution Animal Health Trust (AHT) devoted intensive research for PRA in Tibetan Spaniels, isolating the responsible gene. The mutation was identified by Louise Downs, as part of her PhD studies. A DNA test based on this mutation became available July 8, 2013.Responsible breeders are working hard to eliminate PRA within the breed. Currently, the International Tibetan Spaniel Working Party collects health data including PRA history.

A portosystemic shunt is an abnormal vessel that allows blood to bypass the liver, one of the body's filters, so that it is not cleansed. This rare condition in Tibetan Spaniels is often referred to as a "liver shunt".Most shunts cause recognizable symptoms by the time a dog is a young adult but are occasionally diagnosed only later in life. Since the severity of the condition can vary widely depending on how much blood flow is diverted past the liver it is possible for a lot of variation in clinical signs and time of onset. Often, this condition is recognized after a puppy fails to grow, allowing early diagnosis. Signs of portosystemic shunts include poor weight gain, sensitivity to sedatives (especially diazepam), depression, pushing the head against a solid object, seizures, weakness, salivation, vomiting, poor appetite, increased drinking and urinating, balance problems and frequent urinary tract disease or early onset of bladder stones. A dramatic increase of these signs after eating is a strong supportive sign of a portosystemic shunt.

Like many breeds of dog, Tibetan Spaniels are susceptible to allergy. They can also experience cherry eye, a wikt:prolapsed third eyelid. Additionally, the shape of a Tibetan Spaniel's face makes it prone to a common cosmetic condition called weeping eye.