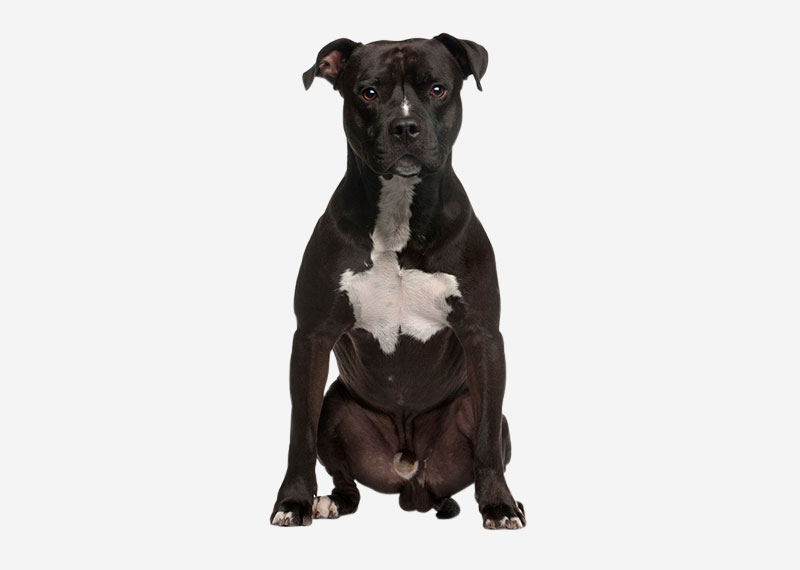 The Staffordshire Bull Terrier (informally: Staffie, Stafford, Staffy or Staff) is a medium-sized, short-coated breed of dog. It is an English people dog, the fifth most popular breed, and related to the Bull Terrier. Descended from bull baiting ancestors, it is muscular and loyal.

Before the 19th century, bloodsports such as bull baiting, bear baiting and cock fighting were common. Bulls brought to market were set upon by dogs as a way of tenderizing the meat and providing entertainment for the spectators; and dog fights with bears, bulls and other animals were often organised as entertainment for both royalty and commoners.Early Bull and Terriers were not bred to resemble the companion animals of today, but for the characteristic known as Game, with the pitting of dogs against bear or bull and exotic animals testing this attribute along with the strength and skill of the dog. Landrace working dogs crossbreeding with Old English Bulldog provided the ancestral foundation stock for the Staffordshire Bull Terrier, the Bull Terrier, the American Pit Bull Terrier and American Staffordshire Terrier. This ancestor is traditionally known as a "Bull Terrier", believed to be around 200 years old by the time of the early 21st century, and is rather a class of races than a particular breed .These bloodsports were officially eliminated in 1835 as Britain began to introduce animal welfare laws. Since Dog fighting were cheaper to organise and far easier to conceal from the law than bull or bear baits, bloodsport proponents turned to pitting their dogs against each other instead. Dog fighting was used as both a bloodsport (often involving gambling) and a way to continue to test the quality of their stock. For decades afterward, dog fighting clandestinely took place in pockets of Britain and America. Dogs were released into a pit, and the last dog still fighting (or occasionally, the last dog surviving) was recognised as the winner. The quality of pluckiness or "gameness" was still highly prized, and dogs that gave up during a fight were reviled as "curs." Despite being trained to be aggressive towards fellow dogs, they had to be of good temperament with people as the handler would have to bring the dog back to scratch for each round.As time went on the modern breed has become one with a temperament suitable for a pet and companion. It gained respectability, becoming a dog worthy to show, and was accepted by The Kennel Club of the United Kingdom as the Staffordshire bull terrier in 1935. Examples of the breed currently found in the United States have no local fighting history, being descendants of the later show dogs who migrated over the Atlantic from the United Kingdom.

Staffordshire Bull Terriers are known to suffer from Hereditary Cataracts (HC) and L-2-hydroxyglutaric aciduria (L2HGA)—a metabolic disorder resulting in behavioural changes and dementia-like symptoms—both of which are detectable via DNA tests.Distichiasis (commonly known as “double eyelash”) and Persistent Hyperplastic Primary Vitreous (or PHPV)—a condition whereby the blood supply to the ocular lens fails to regress and fibrovascular tissue forms causing hazy vision—both of which are checked by way of an ocular examination throughout the life of a breeding stud or brood-bitch to minimise the transfer and spread of these conditions.The breed is known to be at a higher risk from mastocytoma (mast cell tumours) than the general population of dogs.A UK Kennel Club survey puts the median lifespan at 12.75 years.