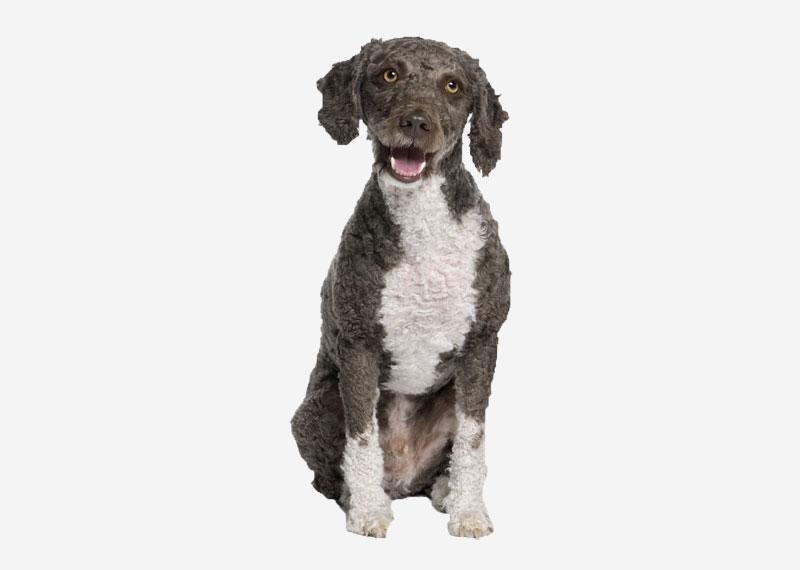 The Spanish Water Dog (Spanish language: Perro de Agua Español) is a breed of dog developed by shepherds in Spain as a multi-purpose herding dog. It was also used sometimes as a gundog, as well as an assistant to fishermen.

There are many different theories as to its origin and history. Records suggest water dogs have been around the main wetlands of the Iberian Peninsula since ancient times. Portuguese and Spanish water dogs are clearly related and have a common ancestor. The SWD was also known by many other names such as, "Perro Turco", "Laneto", "Perro Patero", "Perro Rizado", "Churro", "Barbeta" and most recently "Perro de Agua Español". In Southern Spain (Andalusia) the SWD was often called the "Andalusian Turk" and some thought the breed came with Turkish sheep boats, but this is very unlikely since originally there were three separated populations of SWD in Spain with somewhat different phenotypes and sizes. One of these populations was found in Northern Spain, in Asturias and Cantabria, these dogs were usually smaller and of lighter colour, becoming a new breed 22 March 2011, the Cantabrian Water Dog. The other group could be found in the marshes of western Andalusia, this type of dogs had coats made of long and thin cords. And finally the largest group came from the southern Andalusian sierras, this type of dogs were the largest and strongest since were mainly used for herding. Today the breed is well mixed and most SWD are well rounded and have a balanced of traits.Regardless of its exact origin, it is documented that there was a woolly coated Shepherd Dog on the Iberian Peninsula around 1100 AD. What is then for sure is that this a very ancient and rustic breed, very well adapted to the climate and terrain conditions found in the wetlands and coastal mountains of the Spanish shores.Historically, the SWD were primarily used as Herding dogs to move the flocks of sheep and goats from one pasture to another. The dogs were also called upon to work wherever a dog was required. For example, they were taught to work with fishermen as well as being taught to retrieve when hunting with the farmers.

Revival of the breed

In about 1975, two enthusiasts, Antonio García Pérez and Santiago Montesinos travelled around the countryside of Southern Spain, through the remote villages and farms of the mountainous region of Andalusia and bought or borrowed a number of dogs from the shepherds that they felt most fit the type they were looking for to establish a breeding program.In 1980 the Spanish Water Dog Club (Spain) was formed in order to promote the breed and help get it recognized in its own country.In 1985, after a lot of hard work and displaying the breed at various venues and dog shows the Spanish Kennel Club accepted it and gave it official status. It was provisionally recognized by Fédération Cynologique Internationale until 1999, when it was permanently recognized. The SWD was officially recognized in the United States by the United Kennel Club in 2001 and fully accepted for conformation events in 2004. Jerry and Ken Mann were instrumental in facilitating recognition in UKC. They presented the first SWD to be shown in an AKC Rare Breed Conformation venue in Inverness, Florida in January 2000. They presented an Introduction Seminar at a UKC venue in South Carolina in 2001 and showed the first SWD at a UKC Mult-Breed show in the Summer of 2004. They spearheaded the first International SWD discussion list and were the first owners to use their SWD for herding in the United States. They brought the natural ability and historic value of herding to the fore. As of July 1, 2013, the Spanish Water Dog will move into the Herding Group in the UKC.The Foundation Stock Service Program recognized the breed in 2005 through the efforts of the Spanish Water Dog Club, Inc. The AKC approved the breed to begin competition in AKC herding, in dog agility trials, obedience training, and tracking beginning January 1, 2008. In June of 2012, the SWD moved into the Miscellaneous Group. Eventually, the breed will join the Herding Group. Herding instincts and trainability can be measured at noncompetitive herding tests. Spanish Water Dogs that exhibit basic herding instincts can be trained to compete in herding trials. Additionally, the breed was recognized by the American Herding Breed Association in 2007.The Canadian Kennel Clubs Listed and Miscellaneous Breeds was amended to include the Spanish Water Dog as a listed breed effective September 1, 2008.

The breed's life expectancy is thought to be about 14 years. Recent health testing has uncovered the following issues: