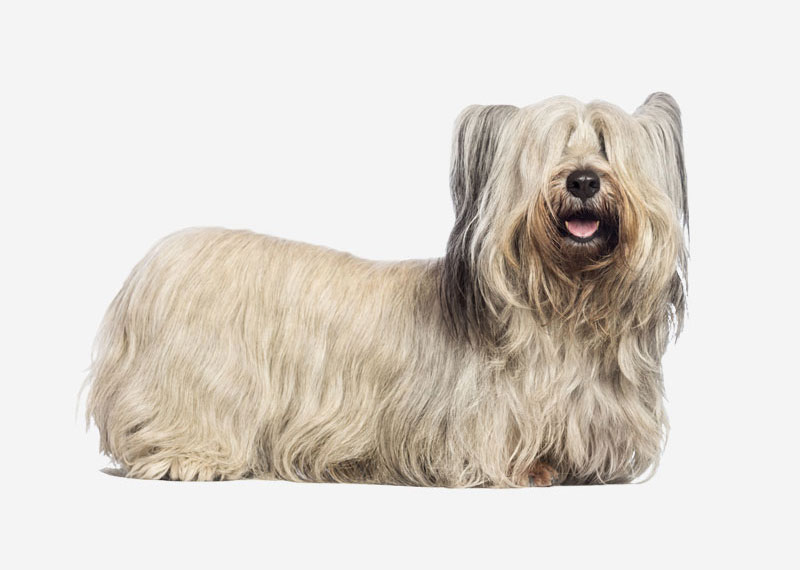 The Skye Terrier is a breed of dog that is a long, low, hardy terrier and "one of the most endangered native dog breeds in the United Kingdom" according to the The Kennel Club.

Scotland has long been a stronghold of small plucky terriers, and the Skye Terrier is among the oldest of them. They developed along the west coastal area, where they hunted fox and otter from among the rocky cairns. The purest of these dogs were found on the Isle of Skye, and the dogs were then named Skye Terriers. Skye Terriers were first described in the sixteenth century, when it was already noteworthy for its long coat. Some confusion exists in tracing its history because, for a certain time, several different breeds had the same name "Skye Terrier". The loyal dog, present under the petticoat of Mary, Queen of Scots at her execution, has been ascribed as a Skye Terrier. In 1840, Queen Victoria made the breed fancy, keeping both drop-(floppy) and prick-(upwards) eared dogs. This highly increased its popularity in many of the high societies and among commoners, which are very high class. Soon enough, the Skye Terrier came to America because of its extreme popularity throughout its country and some others. The American Kennel Club recognized the breed in 1887, and it quickly rose to the show scene position. Even though this was a strong start and the breed's great appearance, its popularity has dropped. Now it is among one of the least known terriers. Many people are unaware of this breed's old popularity because it is not famous now.
.

If a Skye is exercised too often, too young, especially before 8 months, they can damage their bone growth, leading to a painful limp and possibly badly bowed legs. Jumping up and down from objects, climbing over objects, running, even long walks, are all things to be avoided for the first 8 to 10 months to prevent later problems and allow for correct closure of the growth plate.Degenerative disc disease is also a common problem in short-legged dogs, and as many as 10% of Skyes will suffer from it.Mammary tumor is the leading cause of Skye Terrier deaths, with Hemangiosarcomas (a malignant tumour of the blood vessels), Autoimmune disease, and Hyperthyroidism as other concerns of the breed.