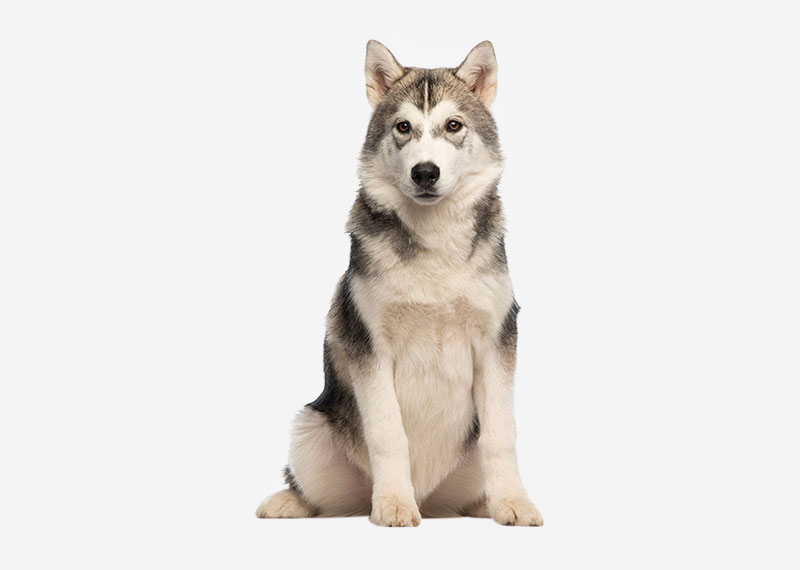 The Siberian Husky ("Sibirsky husky") is a medium to large, dense-coat working dog breed that originated in north-eastern Siberia. The breed belongs to the Spitz genetic family. It is recognizable by its thickly furred Coat, sickle tail, erect triangular ears, and distinctive markings.Huskies are an active, energetic, and resilient breed whose ancestors came from the extremely cold and harsh environment of the Siberian Arctic. Siberian Huskies were bred by the Chukchi people of Northeastern Asia to pull heavy loads long distances through difficult conditions. The dogs were imported into Alaska during the Nome, Alaska Gold Rush and later spread into the United States and Canada. They were initially sent to Alaska and Canada as sled dogs but rapidly acquired the status of family pets and show dogs.

The Siberian Husky, Samoyed, and Alaskan Malamute are all breeds directly descended from the original sled dog, which 2004 DNA analysis confirms is one of the ancient dog breeds. It is thought that the term "husky" is a corruption of the nickname "Esky" once applied to the Eskimos and subsequently to their dogs.Breeds descending from the List of dog types#Sled dogs or Qimmiq were once found throughout the Northern Hemisphere from Siberia to Canada, Alaska, Greenland, Labrador, and Baffin Island.With the help of Siberian Huskies, entire tribes of people were able not only to survive, but to push forth into terra incognita. Admiral Robert Peary of the United States Navy was aided by this breed during his expeditions in search of the North Pole. The same year saw recognition of the Siberian Husky by the American Kennel Club. Nine years later, the breed was first registered in Canada. The United Kennel Club recognized the breed in 1938 as the "Arctic Husky" changing the name to Siberian Husky in 1991. Seppala owned a kennel in Nenana before moving to New England, where he became partners with Elizabeth Ricker. The two co-owned the Poland Springs kennel and began to race and exhibit their dogs all over the Northeast.As the breed was beginning to come to prominence, in 1933 Navy Rear Admiral Richard E. Byrd brought about 50 Siberian Huskies with him on an expedition in which he hoped to journey around the 16,000-mile coast of Antarctica. Many of the dogs were trained at Chinook Kennels in New Hampshire. Called Operation Highjump, the historic trek proved the worth of the Siberian Husky due to its compact size and greater speeds. comprising two layers: a dense Down hair and a longer topcoat of short, straight guard hairs. It protects the dogs effectively against harsh Arctic winters, but the coat also reflects heat in the summer. It is able to withstand temperatures as low as 50.8cm - 59.7cm. The undercoat is often absent during Moult. Their thick coats require weekly grooming. They are known to Dog communication#Howls rather than bark. If the dog is well trained when it's young, it can make an ideal family pet. They are affectionate with people of all ages. Behavioral issues include a tendency to roam and to make escape attempts. The ASPCA classifies the breed as good with children. It states they exhibit high energy indoors, have special exercise needs, may pursue cats, and may be destructive "without proper care." Siberians need consistent training and do well with a dog training training program. They rank 45th in Stanley Coren's The Intelligence of Dogs, being of average working/obedience intelligence. They tend to run because they were at first bred to be sled dogs. They were historically bred to be working and companion animals by the Chukchi people, and should always be gentle in nature. The Chukchi people use Siberian huskies to look after their children.

A 1999 ASPCA publication gives the life span of the Siberian Husky as 12 to 14 years. Health issues in the breed are mainly genetic, such as seizures and defects of the eye (cataracts, Corneal dystrophies in dogs, canine glaucoma and progressive retinal atrophy) and congenital laryngeal paralysis. Hip dysplasia (canine) is not often found in this breed; however, as with many medium or larger-sized canines, it can occur. The Orthopedic Foundation for Animals currently has the Siberian Husky ranked 155th out of a possible 160 breeds at risk for hip dysplasia, with only two percent of tested Siberian Huskies showing dysplasia.Siberian Huskies used for sled racing may also be prone to other ailments, such as List of dog diseases#Gastrointestinal diseases, bronchitis or bronchopulmonary ailments ("ski asthma"), and gastric erosions or Peptic ulcer.Modern Siberian Huskies registered in the US are largely the descendants of the 1930 Siberia imports and of Leonhard Seppala’s dogs, particularly Balto. The limited number of registered foundational dogs has led to some discussion about their vulnerability to the founder effect.