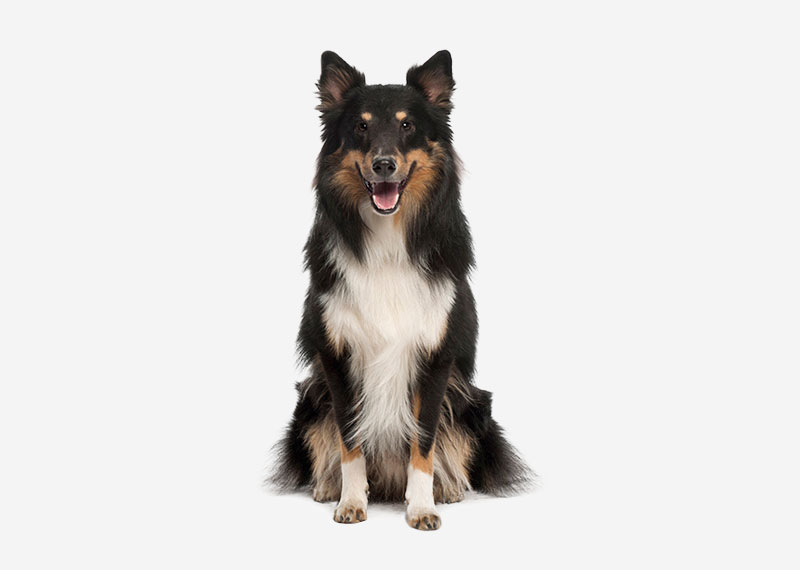 The Shetland Sheepdog, often known as the Sheltie, is a breed of herding dog. They are small to medium dogs, and come in a variety of colors, such as sable, tri-color, and blue merle. They are vocal, excitable, energetic dogs who are always willing to please and work hard. They are partly derived from dogs used in the Shetland Isles for herding and protecting sheep. The breed was formally recognized by the The Kennel Club in 1909.The Shetland Sheepdog's early history is not well known. Although of obscure origin, the sheltie is probably a descendant of small specimens of the Scottish collie and the King Charles spaniel. It was developed to tend the diminutive sheep of the Shetland Islands, whose rugged, stormy shores have produced other small-statured animals such as the Shetland pony. Today it is raised as a farm dog and family pet. They were originally a small mixed-breed dog, often in height and it is thought that the original Shetland herding dogs were of Spitz type, and were crossed with collie-type sheepdogs from mainland Britain. In the early 20th century, James Loggie added a small Rough Collie to the breeding stock, and helped establish what would become the modern Shetland sheepdog. The original name of the breed was "Shetland Collie", but this caused controversy among Rough Collie breeders at the time, so the breed's name was formally changed to Shetland Sheepdog. and then after being brought to England, it was further extensively crossed with the Rough Collie, and other breeds including some or all of the extinct Greenland Yakki, the King Charles Spaniel (not the Cavalier King Charles Spaniel), the Pomeranian,

For the most part, Shelties are athletic and healthy. Like the Rough Collie, there is a tendency toward inherited malformation and disease of the eyes. Each individual puppy should have his eyes examined by a qualified veterinary ophthalmologist. Some Linebreeding may be susceptible to hypothyroidism, epilepsy, Hip dysplasia (canine) or skin allergies.Shelties are also highly susceptible to Transitional Cell Carcinoma (TCC). TCC is a cancer of the bladder, and can be diagnosed early by regular urinalysis from a normal veterinarian. Causes are debated between breed susceptibility and female gender and exposure to insecticides.Dermatomyositis may occur at the age of 4 to 6 months, and is frequently misdiagnosed by general practice veterinarians as mange or demodectic mange. The disease manifests itself as alopecia on the top of the head, supra- and suborbital area and forearms as well as the tip of the tail. If the disease progresses to its more damaging form, it could affect the autonomic nervous system and the dog may have to be euthanised. This disease is generation-skipping and genetically transmitted, with breeders having no clear methodology for screening except clear bloodline records. Deep tissue biopsy are required to definitively diagnose dermatomyositis.Von Willebrand disease is an inherited bleeding disorder. In Shelties, affected dogs as a general rule are not viable and do not live long. The Sheltie carries type III of von Willebrands, which is the most severe of the three levels. There are DNA tests that were developed to find von Willebrands in Shelties. It can be done at any age, and it will give three results: affected, carrier and non-affected. Shelties may also suffer from hypothyroidism, which is the under-functioning thyroid gland. It is an Autoimmune disease where the immune system attacks the thyroid gland. Clinical symptoms include hair loss or lack of coat, over or under-weight, and listlessness.Although small breed dogs are not usually plagued by Hip dysplasia (canine), it has been identified in Shelties. Hip dysplasia occurs when the head of the femur and the acetabulum do not fit together correctly, frequently causing pain and/or lameness. Hip dysplasia is thought to be genetic. Many breeders will have their dogs' hips x-rayed and certified by the Orthopedic Foundation for Animals.

The two basic forms of inherited eye diseases/defects in Shelties are Collie eye anomaly (CEA) and progressive retinal atrophy (PRA).Collie eye anomaly: An autosomal recessive inherited trait which results in incomplete closure of the embryonic fissure; seen almost exclusively in Collies, Border collies and Shetland sheepdogs. CEA can be detected in young puppies by a veterinary ophthalmologist. The disease involves the retina. It is always Bilateral symmetry#Bilateral symmetry although the severity may be disparate (unequal) between eyes. Other accompanying defects (ophthalmic anomalies) may wrongly indicate a more severe manifestation of CEA. CEA is present at birth and although it cannot be cured, it doesn't progress. Signs of CEA in shelties are small or deepset eyes. That is, the severity of the disease at birth will not change throughout the dog's life. CEA is scored similar to the way hips are.CEA is genetic, inheritance is autosomal recessive, this means that even a dog that shows no phenotypic signs of the condition may be a carrier. Breeders should actively try to breed this disease out by only breeding with dogs that have "clear" eyes or very low scoring eyes. A CEA score considered too high to breed with may still be low enough not to affect the dog's life. These dogs live happy and healthy lives as pets but should be not used for breeding. The recent development of a DNA test for CEA makes control of this disease much more likely as more breeders take advantage of the test. http://www.optigen.com/opt9_test_cea_ch.htmlPRA can be detected at any time but usually does not show up until the dog is around two years of age. Breeding dogs should be tested for genotype for this condition before breeding and only animals found "clear" should be used for breeding. PRA can occur in most breeds of dog including mix breeds. In Most breeds it is also an Autosomal Recessive condition, however it has been found in other breeds to be Autosomal dominant#Autosomal versus sex-linked dominance and sex-linked in others. As the name suggests, it is a progressive disease which will eventually result in total blindness. Like CEA, an affected dog should not be bred with but these dogs can live happily as pets. Currently there is no treatment for either disease, but as both diseases (CEA and PRA) are hereditary it is possible to eliminate them using selective breeding.

As with any dog, Shelties should be screened for inheritable genetic diseases before breeding. Both male and female should be tested for thyroid problems, Von Willebrands disease and brucellosis, as well as have hip x-rays cleared by the Orthopedic Foundation for Animals and eyes cleared by .Breeding colours is also a problem for many beginner breeders. Certain colour combinations can produce unwanted or potentially harmful results, such as mating blue merle to blue merle. Blue merle to blue merle crosses can produce what is called a "double merle" the result of which can be deaf and/or blind. Mating a sable and white to a blue merle can produce a sable merle, which is undesirable for the show ring. A tri-colour to a pure-for-sable (a sable and white which can produce only other sable and whites), will produce only sable and whites, but they will be tri-factored sable and whites (which means they have the tri-gene.) There are many more examples of breeding for color, so a good breeder will research color genetics prior to breeding. There are many different genes contributing to the different colors of the Sheltie, including the bi gene, the merling gene, the sable gene, and the tricolour gene.

According to the College of Veterinary Medicine at Washington State University, the Shetland Sheepdog, and many other herding breeds, have a risk of being born with a MDR1 Gene Mutation, frequency for the Shetland Sheepdog is stated at 15%. Cross-breeds are affected too. History of mdr1-1 . Dogs carrying mdr1-1 share a common ancestor that experienced remarkable evolutionary success, having contributed genetically to at least nine distinct breeds of dog. Due to this genetic mutation, affected dogs may exhibit sensitivity or adverse reactions to many drugs including Acepromazine, Butorphanol, Doxorubicin, Erythromycin, Ivermectin, Loperamide, Milbemycin, Moxidectin, Rifampin, Selamectin, Vinblastine & Vincristine.