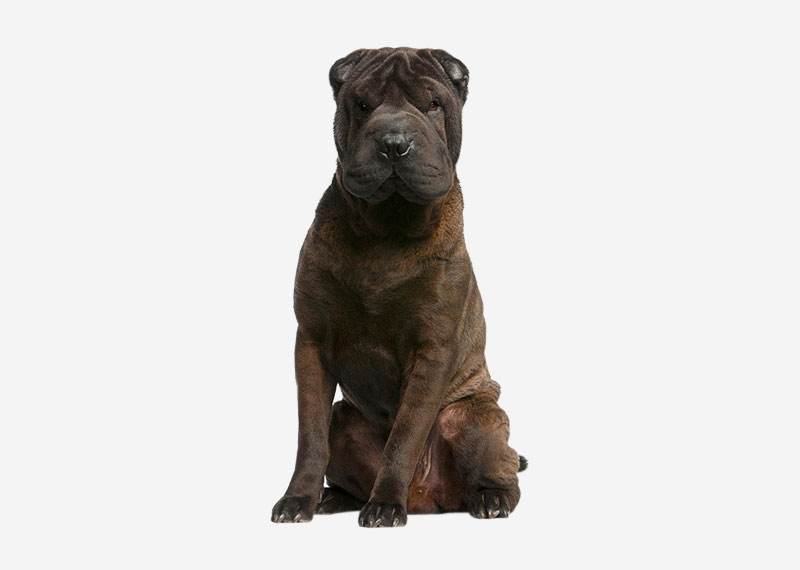 The Shar Pei or Chinese Shar-Pei, is a breed of dog known for its distinctive features of deep wrinkles and a blue-black tongue. The breed comes from China. The name (沙皮, pinyin: shā pí; English name probably derived from United Kingdom spelling of the Cantonese equivalent, sā pèih) translates to "sand skin" and refers to the texture of its short, rough coat. As puppies, Shar Pei have numerous wrinkles, but as they mature, these wrinkles loosen and spread out as they "grow into their skin". Shar Pei were named in 1978 as one of the world's rarest dog breeds by Time (magazine) magazine and the Guinness World Records. The American Kennel Club did not recognize the breed until 1991.

The Shar Pei breed comes from the Guangdong province of China. The original Shar-Pei from China looked very different from the breed now popular in the West. People in southern China, Hong Kong, and Macau differentiate the Western type and the original type by calling them respectively 'meat-mouth' and .The ancestry of the Shar-Pei is uncertain. It may be a descendant of the Chow Chow; however, the only clear link between these is the blue-black tongue. However, pictures on pottery suggest the breed was present even in the Han Dynasty (206 BC). A statue on display at the Boston Museum of Fine Arts dating from the second century A.D. depicts a dog that strongly resembles a modern Shar Pei. For many years, the Shar-Pei was kept as a general-purpose farm dog in the Chinese countryside, used for hunting, protecting and herding stock and guarding the home and family. During that time, the Shar-Pei was bred for intelligence, strength and scowling face. Recent genetic research has suggested the Shar-Pei is one of a few ancient dog breeds, believed to have split from common ancestors earlier than other breeds. By mapping subtle differences in each breed’s genes, searching for patterns of relationships and designing a tree to fit them, they could finally gain insight into this marvel of evolutionary engineering. In 2004, the foundational analysis of purebred dog genetics was published in Science. The resulting tree was profoundly asymmetrical. After wolves, just four groups sat its base: Asia’s shar-pei, along with shiba inu, akita and chow chow; central Africa’s basenji; malamutes from the Arctic, along with Siberian huskies and samoyeds; and from the Middle East, Afghan hounds and salukis.Later, it was used for dog fighting. The loose skin and extremely prickly coat were developed originally to help the Shar Pei fend off wild boar, as they were used to hunt. Dog fighters used these enhanced traits to make the Shar-Pei difficult for its opponent to grab and hold on to, and so that if it did manage to hold on, the Shar-Pei would still have room to maneuver and bite back. The Shar-Pei's most intriguing feature, in this respect, is that if one grabs them by any loose wrinkle, they can actually twist in their skin and face in one's direction. This trait was used in fighting as a means for them to fight back; they would be bitten and twist in their skin to bite back at the offender. During the Communist Revolution, when the Shar Pei population dwindled dramatically, dogs were rescued by a Hong Kong businessman named Matgo Law, who appealed to Americans in 1973 through a dog magazine to save the breed. Around 200 Shar-Peis were smuggled into America. The current American Shar Pei population stems mainly from these original 200.DNA analysis has concluded that the Shar Pei is one of the most ancient dog breeds.

Because of its popularity after being introduced to North America in the 1970s, the breed suffered much inexperienced or rushed breeding. This resulted not only in a dramatically different look for the Shar-Pei (as its most distinctive features, including its wrinkles and rounded snout, were greatly exaggerated), but also in a large number of health problems.Allergy-induced skin infections can be a problem in this breed.Familial Shar Pei fever (FSF) is a serious congenital disease that causes short fevers lasting up to 24 hours, usually accompanied by accumulation of fluid around the ankles (called Swollen Hock Syndrome). These fevers may or may not recur at more frequent intervals and become more intense. Amyloidosis, a long-term condition, is most likely related to FSF, caused by unprocessed amyloid proteins depositing in the organs, most often in the kidneys or liver, leading eventually to renal failure. There is no early test for FSF, but as it is congenital, the dog is either born with it or without it, and if one attack occurs (usually brought on by excessive emotional or physical stress), the dog will always be susceptible to another. With proper care, a Shar-Pei with FSF can live a completely normal and long life.The disease is associated with the western type and it is estimated that 23% are affected. The Australian breed standard was changed in 2009 to discourage breeding for heavy wrinkling.A common problem is a painful eye condition, entropion, in which the eyelashes curl inward, irritating the eye. Untreated, it can cause blindness. This condition can be fixed by surgery ("tacking" the eyelids up so they will not roll onto the eyeball for puppies or surgically removing extra skin in adolescent and older Shar Pei). In Australia, more than 8 in 10 Shar Peis require surgery to correct eye problems.The Shar-Pei is also prone to chronic yeast infections in its ears. This is due to the tight "flap" that the ear creates over the canal, allowing a moist environment.Vitamin B-12 deficiency is a common problem in the Shar Pei and is suspected to be hereditary.