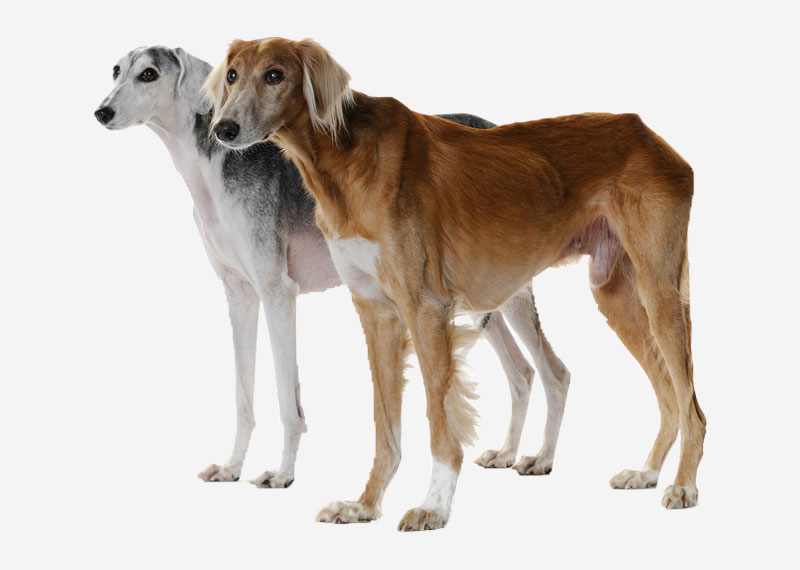 The Saluki, / ALA-LC: salūqī / Persian:سلوکی,سگ تازی also known as the (Slougui) (Arabian Greyhound) (Arabischer Windhund) (Sloughi Moghrebi) (Arabian Sighthound) (Levrier Marocain ) Royal Dog of Egypt or Persian Greyhound is one of the oldest known breeds of domesticated dog. There are petroglyphs and rock arts in Golpaygan and Khomein in central Iran that shows saluki-like hounds and falcons accompanying hunters chasing preys (ca. 8000–10,000 BCE). Also on the potteries found in, Iran (ca. 4200 BCE) are images of saluki-like hounds chasing ibex or lying next to pools. and from the period of the Middle Kingdom of Egypt onwards, Saluki-like animals appear on the ancient Egyptian pyramid#Historical development of 2134 BCE. They have connections to the Avesta, Bible, Koran and Imperial Chinese. Modern breeding in the west began in 1895 when Florence Amherst imported a breeding pair of Salukis from Lower Egypt and began working to popularize the breed. The first registered Salukis in the western studbook were Cyrus and Slongha Peri imported from Iran and registered with the DWZRV. DWZRV also records the first litter in 1922. Salukis were recognized by The Kennel Club in 1923, and by the American Kennel Club in 1929. The breed is also the mascot of Southern Illinois University Carbondale.The Saluki is a sighthound and historically traveled throughout Iran and through Silk road with caravans and nomadic tribes over an area stretching from the Sahara Desert to the Caspian Sea and China. They have been used to hunt quarry such as gazelles, hares and ibex (mostly in North Iran). Shaped like a typical sighthound, they come in two varieties, smooth and feathered. Though they are an independent breed that needs patient training, they are gentle and affectionate with their owners. Health issues in salukis include cancer and cardiac problems.

Salukis are considered to be one of the oldest dog breeds in existence. The name Saluqi has many theories. Linguistics agree the word Saluqi in Arabic is an adjective referring to where an individual was from. Terence Clark reports on four possible locations for the place Saluq including today's Yemen, Iraq and Turkey. In Persian language the dog is referred to as Tazi, which means to run and in Kurdish areas Tazi is also used. Also there are two more places with similar names in Northwest Iran near to the other four locations mentioned in Clark's report.
Modern science tells us the origins of all dogs are to the east in China, but we do not know where the origin of the Saluki is located. All along the Silk Road his presence was known for almost as long as the dog has been domesticated, a testimony to his function as a hunter and his beauty as a companion. His image is found in many cultures.
There are petroglyphs and rock arts in Golpaygan and Khomein in central Iran that shows saluki-like hounds and falcons accompanying hunters chasing preys (ca. 8000-10,000 BC), and as far south as Sudan.They were considered to be the "Royal Dog of Egypt". and have often been found mummified alongside the bodies of the Pharaohs in the Pyramids. It was during the Eighteenth dynasty of Egypt that Salukis rose to their place of prominence, replacing the Tesem (thought to be similar to modern Pariah dogs or a generic term for a dog).The breed is thought to be the type of dog mentioned in The Bible. One of the more amazing pieces of art in Iran is the Tangeh Savashi Canyon Relief, carved around 1800, commissioned by Fath Ali Shah Qajar to commemorate his hunting exploits.Today, the breed is still held in high regard throughout the Middle East, and have been hunting dogs for nobles and rulers around the region. They are considered clean by the Bedouins, and are allowed to be in women's quarters, while other dogs must be kept outside. Sheikh Hamad ibn Isa Al Khalifa (1872–1942), King of Bahrain during the 1930s, was known for a pack of Salukis that accompanied him throughout the Arab world on hunting trips. Following his death, his son Salman ibn Hamad Al Khalifa (1894–1961) attempted to keep the lines pure-bred but they became interbred with other breeds. However, the pure-bred lines of the royal kennel were saved by the efforts of Dana Al Khalifa who was given two pure-bred puppies by the King, and about a decade later had around pure-bred Salukis registered with the Kennel Club of Bahrain. A dog noted as being a Gazelle Hound is featured in a painting of Henry IV, Duke of Saxony, painted in 1514, by Lucas Cranach the Elder. The dog wears a collar decorated with a scallop shell, which was the badge of the pilgrim.One of these was Brigadier General Frederick Lance of the 19th Lancers (Fane's Horse), and his wife, Gladys, returned to Britain with two Salukis from Sarona, Palestine, where he was stationed during the post-war occupation. The Lances were both keen hunters, and rode with their pack of dogs, including both Salukis and terriers, to course jackal and Dorcas Gazelle whilst stationed in the desert. They imported a male, called Sarona Kelb, who became an influence on the breed in the West.Together, the Lances and Florence Amherst mounted a campaign for recognition of the Middle Eastern breed, that coincided with the phenomenon of "Tutmania" caused by Howard Carter (archaeologist) discovery of Tutankhamun in late 1922. In 1923, the Saluki or Gazelle Hound Club was formed, and the Kennel Club (UK) granted official recognition to the breed. Popularity of Salukis dramatically increased, and the Saluki Club of America was founded in 1927, with recognition by American Kennel Club following in 1929.Imports to England during the inter-war years were chiefly from areas of British military influence and commerce: Bahrain, Egypt, Jordan, and Iraq. Both Florence Amherst and the Lances imported breeding stock from the latter two countries. Despite substantial populations of Salukis in Germany, the Netherlands, and Sweden, none of these were imported to England.English Salukis (chiefly descendants of Sarona Kelb) were exported to many countries, but by the mid-1930s, interest slackened, and with the outbreak of World War II, breeding and show activities almost entirely stopped. The number of litters was minimal – just enough to keep the breed alive. Home front during World War II#Rationing reserved all edible meat for humans, and to prevent the Salukis from dying from starvation or being killed by The Blitz, some owners euthanized entire kennels. A small number of Saluki kennels survived the war, and along with fresh imports belonging to a second wave of soldiers returning from the Middle East, the slow process of re-establishing the breed began again. Between 2000 and 2009, 1215 Salukis were registered with The Kennel Club in the UK, while this does not approach the numbers of the more popular breeds, it is in line with similar breeds in the Hound Group such as the Borzoi, which had 1399 puppies registered in the same period. The Saluki's head is long and narrow with large eyes and drop ears. Their coats come in a variety of colors, including white, cream, fawn, red, grizzle and tan, black and tan, and tricolor (white, black and tan). They can get bored easily, and should not be left at home unattended for long periods. Sensitive and intelligent, the Saluki should never be trained using force or harsh methods, and typically does not enjoy rough games or typical dog games such as retrieving balls. Early socialization is required to prevent timidity and shyness in later life.