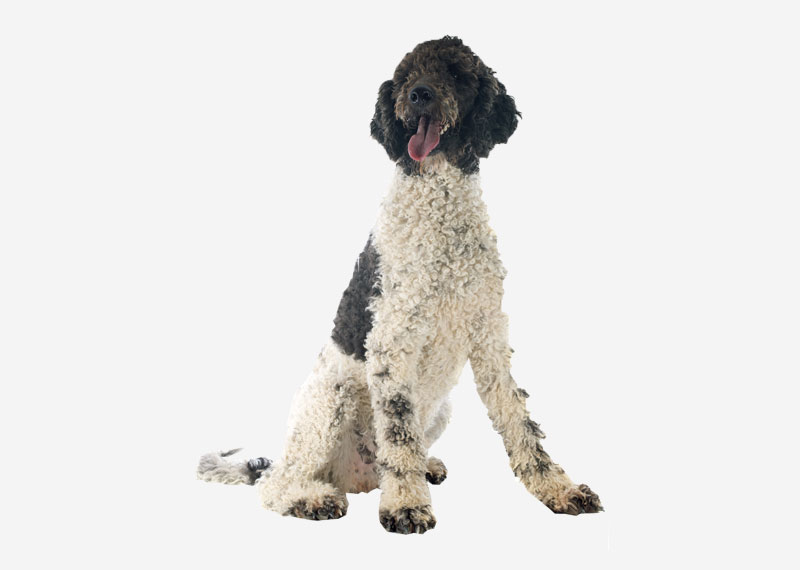 The Portuguese Water Dog is a breed of working dog as classified by the American Kennel Club. Portuguese Water Dogs are originally from the Portuguese region of the, from where the breed expanded to all around Portugal coast, where they were taught to herd fish into fishermen's nets, to retrieve lost tackle or broken nets, and to act as couriers from ship to ship or ship to shore. Portuguese Water Dogs rode in bobbing fishing trawlers as they worked their way from the warm Atlantic waters of Portugal to the frigid fishing waters off the coast of Iceland where the fleets caught cod to bring home.
Portuguese Water Dogs were often taken with sailors during the Portuguese discoveries.In Portugal, the breed is called Cão de Água literally "water dog"). In its native land, the dog is also known as the Algarvian Water Dog (Cão de Água Algarvio) or Portuguese Fishing Dog (Cão Pescador Português). Cão de Água de Pêlo Ondulado is the name given to the wavy-haired variety, and Cão de Água de Pêlo Encaracolado is the name for the curly-coated variety. However, their non-shedding qualities have made them more popular in recent years.
The Portuguese Water Dog has recently gained more fame by being the chosen breed of United States president, who has two of them, and Sunny. The Obama family chose the breed partly due to its hypoallergenic status; Bo was given to the Obama family as a personal gift from Senator Ted Kennedy.

One theory is that some of the rugged Asian herding dogs were captured by the Berber people, people who spread slowly across the face of North Africa to Morocco. Their descendants, the Moors, arrived in Portugal in the 8th century, bringing the water dogs with them.Another theory proposes that some of the dogs left the Asian steppes with the Goths, a confederation of German tribes. Some, (the Ostrogoths), went west and their dogs became the German poodle, called in German the poodle-hund or puddle-dog, that is, water-dog. Others, (the Visigoths), went south to fight the Romans, and their dogs became the Lion Dog, groomed in the traditional lion cut. In 413 Common Era, the Visigoths invaded Iberian Peninsula (modern Spain and Portugal, then known as Hispania) and the dogs found their homeland before being settled in Aquitania north of the Pyrenees in 418 before extending their rule to most of Iberia after 470 A.D.A Portuguese Water Dog is first described in 1297 in a monk’s account of a drowning sailor who was pulled from the sea by a dog with a "black coat, the hair long and rough, cut to the first rib and with a tail tuft".

The PWD was a breed on the verge of extinction when, during the 1930s, Vasco Bensaude, a wealthy Portuguese shipping magnate, began to seek out fishermen's dogs and utilize them in a breeding program to re-establish the breed. Bensaude's kennel was named Algarbiorum, and his most famous dog was Leão (1931–1942), a very "type-y" fisherman's stud dog who was bred to so many different females that about half of the pedigreed Portuguese Water Dogs in existence can trace their lineage back to him.
Bensaude was aided by two Portuguese veterinarians, Dr. Francisco Pinto Soares and Dr. Manuel Fernandes Marques. His work was carried on by Conchita Cintrón, to whom he gave his last 17 PWDs and all his archives.
Dr. António Cabral was the founder of the Avalade kennels in Portugal. Ch. Charlie de Avalade (Charlie), a brown-coated dog, and C. B. Baluarte de Avalade (Balu) were two of his many famous PWDs. He registered his first PWD in 1954, after Bensaude had pioneered the re-establishment of the breed in Portugal. Cabral worked with Carla Molinari, Deyanne Miller, Sonja Santos and others to establish PWDs in the US. The "Mark of Cabral" is a triangular shape of different color/textured hair, usually a few inches from the base of the tail.Deyanne Miller is the single person most responsible for the rise of the PWD in America. In 1972, the Millers, along with 14 other people, formed the Portuguese Water Dog Club of America, Inc. (PWDCA).

Cataracts and PRA (Progressive Retinal Atrophy) are two eye diseases found in PWDs. As with hip dysplasia, some lines carry these defects more frequently than others. PRA, which causes "night blindness", may lead to blindness. Fortunately this is a simple recessive gene. DNA testing is now available which can identify a dog carrying the gene for PRA. Known as "Optigen Testing" a "normal" or "A" dog does not carry the gene for PRA. A "carrier" or "B" dog carries one copy of the PRA gene and the dog will NOT express the disease but may or may not pass the gene to offspring. An "affected" or "C" dog has two copies of the PRA version of the gene and will probably express the disease as late onset Progressive Retinal Atrophy. A "B" or "C" dog should be bred only to an "A" dog to ensure that any offspring will not express the disease.Ingrown eyelashes (distichiasis) occurs in some curly-coated breeds, but is not particularly common in PWDs. Ingrown eyelashes will rub the eye causing extensive corneal ulcerations. All breeding stock should be tested for GM-1 storage disease or GM1 gangliosidoses, which is a fatal nerve disease that typically appears when a puppy is approximately six months of age. The affected puppy will show clinical signs of cerebellar dysfunction including ataxia, tremors, paresis, and seizures. The pet may also exhibit a change in temperament. Lesions of the retina and clouding of the cornea may occur. GM-1 storage disease is a recessive deficiency of betagalactosidase. The condition has been genetically identified and is no longer common.

Dilated cardiomyopathy is a rare, fatal condition caused by an autosomal recessive gene. It affects young dogs, who succumb to heart failure before reaching adulthood. As a simple recessive gene, it had been difficult to identify and was particularly heartbreaking as seemingly healthy puppies would suddenly die, often shortly after joining their adopted families. Since a recessive gene is responsible, that means if at least one parent is homozygous dominant (that is, it does not carry a copy of the cardio version of the gene), its offspring can not contract the disease.In 2007 a genetic linkage test became available which appears promising. This is not a test which confirms if a dog has or does not have the disease; nor will it definitively predict the disease, as even if a dog is a JDC carrier this does not guarantee its offspring will suffer the disease. It only links certain strains of DNA as carriers of JDC. This is significant in that these strains can now largely be deselected for in the breeding process, as has been successful with GM1 Storage Disease (see above). The test is not yet complete for every bloodline, and why the identified strains are implicated is still unknown, and so in essence the cause of the condition remains a mystery to be solved.