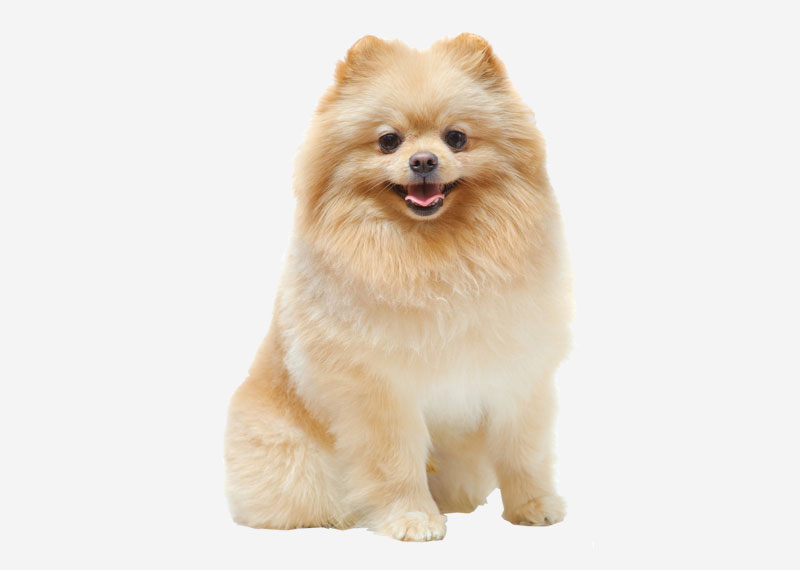 The Pomeranian (often known as a Pom or Pom Pom) is a breed of dog of the Spitz type, named for the Pomerania region in Central Europe (today part of northern Poland and eastern Germany). Classed as a toy dog breed because of its small size, the Pomeranian is descended from the larger Spitz type dogs, specifically the German Spitz. It has been determined by the Fédération Cynologique Internationale to be part of the German Spitz breed, and in many countries, they are known as the Zwergspitz (Dwarf Spitz).

The breed has been made popular by a number of royal owners since the 18th century. Queen Victoria owned a particularly small Pomeranian and consequently the smaller variety became universally popular. During Queen Victoria's lifetime alone, the size of the breed decreased by 50%. Overall, the Pomeranian is a sturdy, healthy dog. The most common health issue is Luxating patella. Tracheal collapse can also be an issue. More rarely, the breed can suffer from a skin condition colloquially known as "black skin disease", or Alopecia X. This is a genetic disease which causes the dog's skin to turn black and lose all or most of its hair. The breed is currently among the top 15 most popular in the USA, and the current fashion for small dogs has increased their popularity worldwide.

The life expectancy of a Pomeranian is 12 to 16 years. A well-bred dog on a good diet with appropriate exercise will have few health problems, and if kept trim and fit a Pomeranian is a sturdy dog. The breed does have similar health issues to many dog breeds, although some issues such as hip dysplasia are uncommon due to the Pomeranian's lightweight build. Some health issues can develop as a result of lack of attention to grooming, and teeth, ear and eye cleaning. With routine care these problems can be avoided. They are prone to early tooth loss and feeding them dry food is recommended. Poms are one of the breeds with the smallest average litter size, with various source giving numbers of between 1.9 and 2.7 puppies per litter.

Merle colored dogs may suffer from mild to severe deafness, increased intraocular pressure, ametropia, microphthalmia, and colobomas. Merle dogs born from parents who are also both merles may additionally suffer from abnormalities of the skeletal, cardiac and reproductive systems.

Luxating patella is another health issue in the Pomeranian breed. It occurs when, through either malformation or trauma, the ridges forming the patellar groove in the knee are not prominent and are too shallow to allow the patella to properly sit securely. This can cause the patella to "luxate" (jump out of the groove) sideways which will cause the leg to lock up with the foot off the ground. Whilst the muscles are contracted the patella cannot return to the correct position. The initial pain is caused by the knee cap sliding across the ridges of the femur. Once out of position, the dog does not feel any pain caused by the slipped disc.

Tracheal collapse is caused by a weakening of the tracheal rings in the windpipe. It occurs when the rings that normally hold the shape of the windpipe collapse, closing the airway. The symptoms of a collapse include a honking cough that can sound similar to a goose honk, an intolerance to exercise, fainting spells and a cough that is worsened by hot weather, exercise and excitement.

In Pomeranians, a condition often called "black skin disease" occurs which is a combination of alopecia (hair loss) and hyperpigmentation (a darkening of the skin). Other names for this condition include wooly coat, coat funk, pseudo-Cushing's disease, or severe hair loss syndrome. This condition affects male Pomeranians more than females, and may be inherited. Although most affected dogs show signs following puberty, it can occur at any age. Other conditions can mimic this condition including Cushing's syndrome, hypothyroidism, chronic skin infections, and reproductive hormone disorders.

Another common disorder in male Pomeranians is cryptorchidism. This is when either one or both of the testicles do not descend into the scrotum. It is treated through surgical removal of the retained testicle.

The Pomeranian has been among the more popular dog breeds in the United States, featuring consistently in the top 20 of registered AKC dog breeds over the last 10 years. The breed ranked #17 in the 2011 rankings, dropping two spots from the previous year.

It is more popular in American cities in 2008, ranking joint tenth (with American Bulldog) in Detroit and Orlando, ninth in Los Angeles, a joint seventh in Seattle (again, with the American Bulldog), but third in Honolulu, only bested by the Labrador Retriever and the German Shepherd Dog.