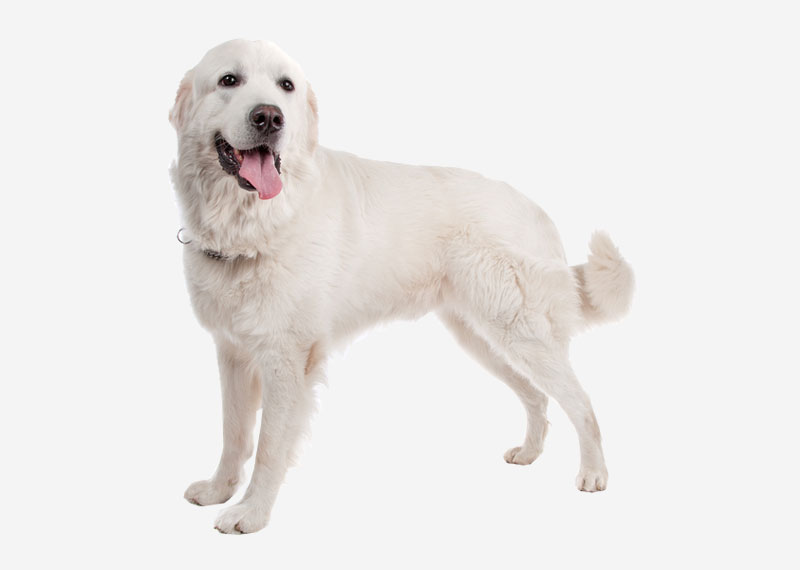 The Polish Tatra Sheepdog is a breed of dog introduced into the Tatra Mountains of Southern Poland by Vlachs (Romanian) shepherds.Tatras are primarily considered livestock guardian dogs. Their instinct, through hundreds of years of breeding, is to protect livestock, though they easily adopt a family as a flock. They are a good companion dog as well as a protection dog. They are not an attack dog, but rather move threats away through intimidation. They have a loud bark. They are not all that similar in temperament to their Mountain dog cousins the Kuvasz, Great Pyrenees or Maremma Sheepdog. They are less aloof than the other breeds, tending to be better tied into their breeding and not as domesticated or inbred as some of their cousins.In the USA the Tatra sheepdog is considered a rare breed. It is not recognized by the American Kennel Club.

The Polish Tatra Sheepdog, which sometimes goes by the Owczarek Podhalanski and the Polish Mountain Sheepdog originated in Podhale, in the Tatra Mountain area of Poland, hence the breed's name. The breed has lived in the Polish mountains for thousands of years, but no exact date for the start of the breed was ever recorded. There is a similar mystery around what breeds were mixed to form the Polish Tatra Sheepdog. While no one is certain, many dog breeders say that the Polish Tatra Sheepdog came from the Mastiff breed. The breed was very popular among mountain workers for several centuries, and up to today. It was so popular because, as its name implies, it was a fantastic sheepdog. This success at herding sheep was mainly due to their high intelligence. When predators were around the sheep, the Polish Tatra Sheepdog would gather up the sheep and stand by them instead of trying to attack the predator, which would leave the sheep open for other attacks. This demonstrates their intelligence. Their white coat also made them easily distinguishable from a bear or wolves, which was very helpful for workers. Also, owners could shave the dogs and use their coat to produce wool. Mountain workers also used to hold their tails while they lead the workers through the mountains and rough terrain. Herding sheep was not the only job the breed could perform. They were often used as personal guards and frequently guarded factories and other private property. On top of this, it was often the case that the breed was used by the police force. The breed faced some hard times, though. After the World Wars the breed was on the brink of extinction. The Fédération Cynologique Internationale, (FCI), would not allow this to happen, though, and by the 1960s they started breeding the sheepdog more and more. Centuries ago, as their reputation as excellent sheepdogs spread, the breed spread slowly across Europe, but in 1980, an American Foreign Service Officer enjoyed the breed so much that he had three of them shipped to United States, and by 1981 the breed also spread to Canada.