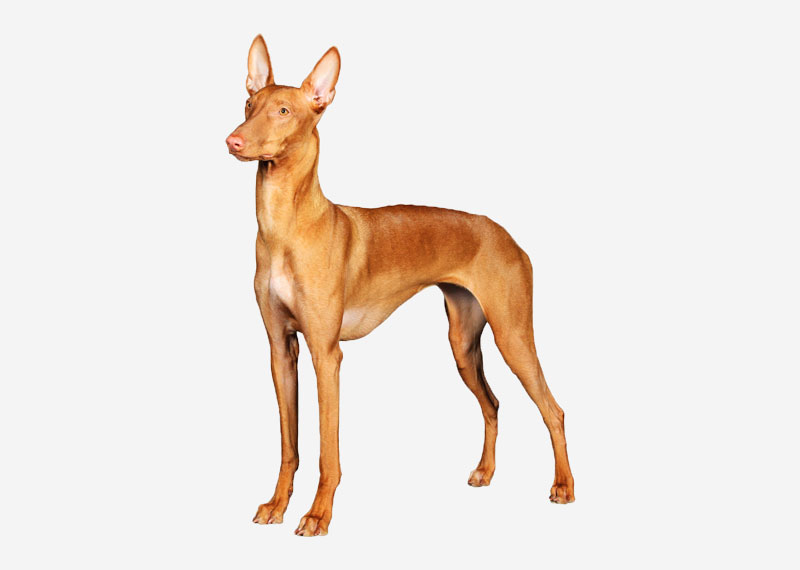 The Pharaoh Hound is a breed of dog and the national hound of the Mediterranean nation of Malta. Its native name is Kalb tal-Fenek (plural: Kilab tal-Fenek) in Maltese language, which means "Rabbit dog". The dog is traditionally used by some Maltese men for hunting.Based on DNA analysis, the breed has no link with Ancient Egypt. However, a popular myth holds that the breed is descended from the Tesem, one of the ancient Egyptian hunting dogs. Some believe the there are similarities between the breed and images of dogs found on the walls of Art of ancient Egypt. This myth proposes that the Pharaoh Hound was brought by the Phoenicians to Malta, where it has existed for over 2,000 years.The breed has variously been classified as a member of the sighthound group.

In 1647 Giovanni Francesco Abela, in his Della Descrittione di Malta isola nel Mare Siciliano: con le sue antichità, ed altre notizie, wrote "... we have the dogs called Cernechi, much valued for rabbit-hunting, which are often in demand as far away as France, mainly for [use in] steep and stony mountain terrain". Authors such as Cecil Camilleri have taken this to refer to the Kelb tal-Fenek. The modern Cirneco dell'Etna is a Sicily breed, very similar in structure and appearance, but somewhat smaller (43cm - 51cm) than the Kelb tal-Fenek.In Britain, the first two specimens of the breed were brought from Malta in the 1920s, but no litter was bred. Again, some dogs were imported to the UK in the early 1960s, and the first litter was born in 1963. The breed standard was recognised by The Kennel Club in 1974. The breed was called the Pharaoh Hound although this name was already used by the Fédération Cynologique Internationale as an alternative name for the Ibizan Hound at that time. When the FCI abolished this name in 1977 and decided to call the Ibizan Hound exclusively by its original Spanish language name Podenco Ibicenco, the term Pharaoh Hound was transferred to the Kelb tal-Fenek, whose breed standard had been recognised by the FCI at the same time.There are a number of breeds similar to the Pharaoh Hound in the Mediterranean area, including the Cirneco in Sicily. Others include the Podenco Ibicenco, the Podenco Canario and the Portuguese Podengo. Each breed is slightly different with physical characteristics that match the terrain the dogs hunt on. It is not clear whether those breeds have descended from the same ancestral lines or whether their similarities have developed due to similar environmental conditions.

Pharaoh hounds, being somewhat uncommon outside of the Maltese Islands of Malta and Gozo, and because they are not profitable for commercial breeding, have not been subjected to as much irresponsible breeding as some more popular breeds. Breeders try hard to prevent hereditary diseases from entering the gene pool. Pharaohs are basically free from genetic diseases. Reputable breeders continue to test their breeding stock for genetic conditions such as Hip dysplasia (canine), luxating patellas, and myriad eye conditions just to ensure that these disorders do not become a problem. Reputable breeders should be able to show documentation of health screening performed on their breeding dogs. Note that Pharaohs, like most sighthounds, are sensitive to barbiturate anaesthetics. Their ears are thin and prone to frostbite when in cold climates.
Life expectancy is about 12 to 14 years.