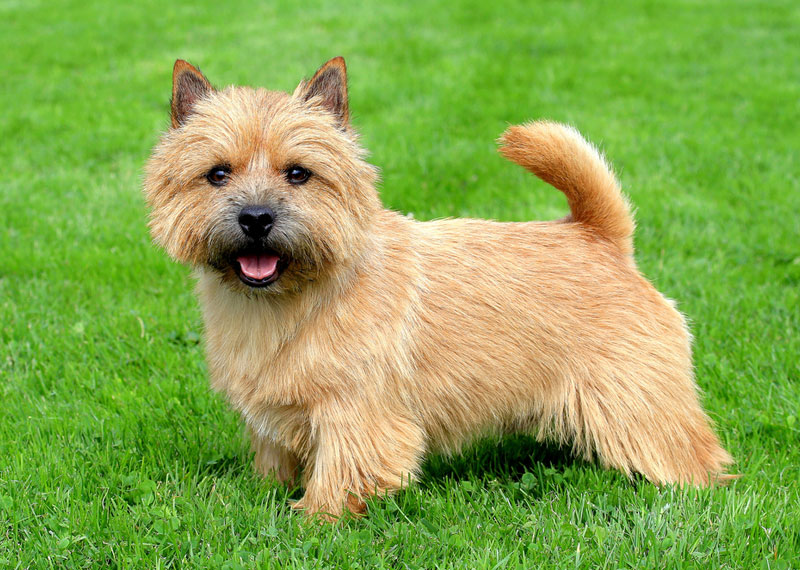 The Norwich Terrier is a breed of dog. It originates in the United Kingdom and was bred to hunt small vermin or rodents. With a friendly personality, Norwich Terriers are today mostly a companion dog breed. One of the smallest terriers, these dogs are generally healthy, but are relatively rare, due in part to their low litter size and the common need for caesarian sections.

The breed has existed since at least the late 19th century as a working terrier of East Anglia, England. The dogs were useful as ratters in the stable yard, bolters of fox for the hunt, and family companions. It was the mascot of University of Cambridge students. Small red terriers, descendants of Irish Terriers, had existed in the area since at least the 1860s, and these might be the ancestors of the Norwich or it might have come from the Trumpington Terrier, a breed that no longer exists. In its earliest history, it was also known as the Jones Terrier and the Cantab Terrier.Since its earliest identification as a breed, puppies have had either drop or prick ears, and both were allowed when the Norwich was first recognized in the conformation show in 1932 by The Kennel Club (England). Drop ears were often cropping (animal) until it became illegal to do so. This intensified a long-standing controversy over whether drop-eared dogs should be allowed in the show ring and whether the primary difference was simply the ears or whether other, deeper, personality and structural differences marked the drop-eared variety. Starting in the 1930s, breeders increased their efforts to distinguish the breeds. While Norfolk and Norwich Terriers were inter-bred for a number of years today they are positively two distinctive breeds. In fact some historical texts indicate that they were distinctive breeds before they were inter-bred.Both ear types continued to be allowed in the ring until The Kennel Club recognized the drop-eared variety as a separate breed, the Norfolk Terrier, in 1964, and the American Kennel Club, United Kennel Club, and Canadian Kennel Club did the same in 1979. Until that time, the breeds were designated by the AKC as Norwich Terriers, P.E. (prick ears) and Norwich Terriers, D.E. (drop ears).

US and UK breed surveys put the life expectancy of the Norwich Terrier at 13–13.5 years. While the Norwich Terrier is considered a healthy breed, there are some health issues for which responsible breeders do preventive genetic health testing, thereby reducing the incidences. The Norwich Terrier does have a predisposition for some health issues but studies to determine the exact mode of inheritance or the exact frequency in the breed are unknown or have not been conclusive. At present there are no disorders identified as "most important". Of secondary magnitude, cataracts are recognized as a disorder that has been reported sporadically and may be inherited. Also of a secondary magnitude there are instances of epilepsy in animals, narrow tracheas, luxating patellas, Hip dysplasia (canine), mitral valve, [atopy|atopy(allergic inhalant dermatitis)] and incorrect bites (how the teeth meet when the jaws are closed).Like all dogs, Norwich Terriers can have autoimmune reactivity to rabies vaccinations. Rabies-Vaccine-Induced Ischemic Dermatopathy or RVI-ID, is a non-fatal but potentially serious reaction to chemicals called adjuvants in the vaccine. RVI-ID is often misdiagnosed, but if correctly diagnosed, is treatable. Symptoms may include: symmetrical dark spots or lesions at the tips of the ears; swelling, hard lumps or dark spots in the vicinity of the injection site. Higher volume Norwich breeders are seeing more dogs with breathing concerns, and the Norwich and Norfolk Terrier Club (USA) has formed a new "Health and Genetics Sub-Committee for Research on Upper Airway Syndrome in Norwich Terriers". Upper Airway Syndrome (UAS) covers all abnormalities that can occur in the upper airway, including: elongated soft palates; too short soft palates; narrow/misshapen tracheas; collapsing tracheas; stenotic nares (nasal passages that are too small); swollen tonsils; everted laryngeal saccules. These upper airway disorders can occur singly or in combination with one or two others. All compromise the airway and the dog's ability to breathe normally; the dog's breathing often sounds raspy or moist. It may be that shorter muzzles may have increased incidence of such issues.Norwich Terriers generally have small litters of 1 to 3 puppies. Generally, if a female is healthy, its optimal breeding period is between the ages of 2 (after all genetic health testing is complete - heart, eyes, hips and patellas) and six years. At seven years of age dogs are considered geriatric. The small supply and the high price of a purebred Norwich Terrier - often around US$2,500 in 2008 - has attracted fraud, as unsuspecting buyers pay full price for Cairn Terriers with docked tails or mixed-breed puppies. In Canada and the United States, you can verify if a dog has completed genetic health testing by checking the open registry at . 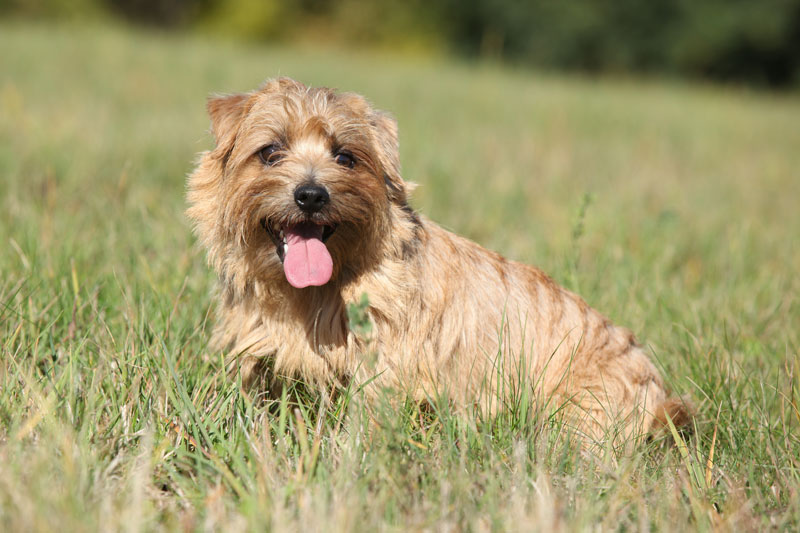