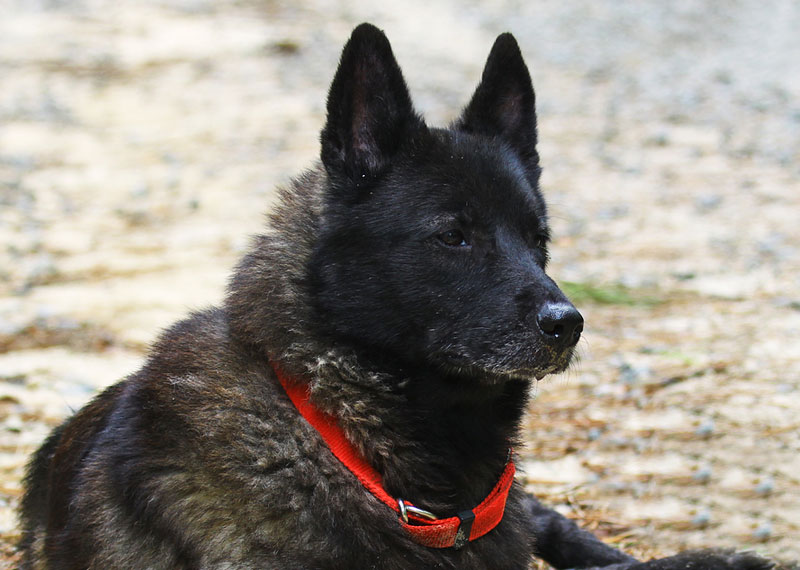 The Norwegian Elkhound is one of the ancient Northern Spitz-type breed of dog and is the National Dog of Norway. The Elkhound has served as a hunter, guardian, herder, and defender. It is known for its courage in tracking and hunting moose (or elk) and other large game, such as bear or wolf. The Norwegian Elkhound was first presented at a Conformation show in Norway in 1877.The American Kennel Club breed name "Norwegian Elkhound" is a direct translation from its original Norwegian language name Norsk Elghund, meaning "Norwegian moose dog." The breed's object in the hunt is to independently track down and hold the moose at bay—jumping in and out toward the moose, distracting its attention, while signaling to the hunters by barking very loudly—until the hunter who follows the sound can arrive to shoot it. The dog will only bark while the moose is stationary, but it can also slowly drive the moose towards shooters lying in wait. The Norwegian Elkhound is also used on a leash. In this mode of hunting, the dog leads the hunter in the direction of the moose while keeping quiet.

The Norwegian Elkhound is an ancient breed, having been developed over 6,000 years ago to help early Nordic Stone Age#Neolithic and Vikings hunt big game such as moose and bear. Remains of dogs remarkably similar to the modern Elkhound have been found in grave sites such as the Svarthola in Jæren, Norway, where they were dated as far back as 4000–5000 BC. Archaeological excavations in Scandinavia suggest this breed existed and was domesticated in the Stone age. At the end of the 19th century the breed came to England, and in 1901 the The Kennel Club officially recognized it.For many years, the Norwegian Elkhound was considered the oldest of all dog breeds, going back further than 6,000 years. Recent DNA analysis suggests, however, that several "ancient" breeds have been "recreated in more recent times from combinations of other breeds" (Ostrander et al., 2004). The researchers found "genetic evidence for a recent origin of the Norwegian
Elkhound, believed to be of ancient Scandinavian origin". But this study only includes 85 of the world's more than 400 dog breeds, omits many primitive lineages, and clusters the breeds together into just four major groups called clades. Nevertheless, some researchers say that the Norwegian Elkhound is a descendant of the ancient "primitive" Pariah Dog that existed 4,000–7,000 years ago.Of the four major clades that Ostrander et al. clusters together, Clade II includes dogs with the Genetics haplotype D8 from two Scandinavian dog breeds: the Norwegian Elkhound and the Jämthund. This genetic sequence haplotype is closely related to two wolf haplotypes found in Italy, France, Romania, and Greece, and is also related to a wolf haplotype found in western Russia (Vila et al., 1997). Clade II appears to be only seen in Norwegian breeds and exhibits a vast amount of divergences. It is suggested that this clade illustrates an ancient and independent origin from wolves that are now extinct (Raisor, 2004). The Norwegian Elkhound evolved, at least partially, from ancestral grey wolf subspecies now found in south central Europe and western Russia and may very well be one of the most ancient of all dog breeds.In Medieval times it was known as a dyrehund, meaning "animal-dog" in Norwegian, and was highly prized as a hunting dog but rarely seen or bred outside of Norway.

Norwegian Elkhounds sometimes carry a Dog health#Genetic ailments to suffer from progressive retinal atrophy or, like many medium and large breeds, Hip dysplasia (canine), Renal#Diseases and disorders and cysts, particularly in later life; they are also prone to thyroid problems. Overall, however, they are a hardy breed with few health problems.Elkhounds are prone to rapid obesity and must not be overfed
.They have a lifespan of 11–16 years.