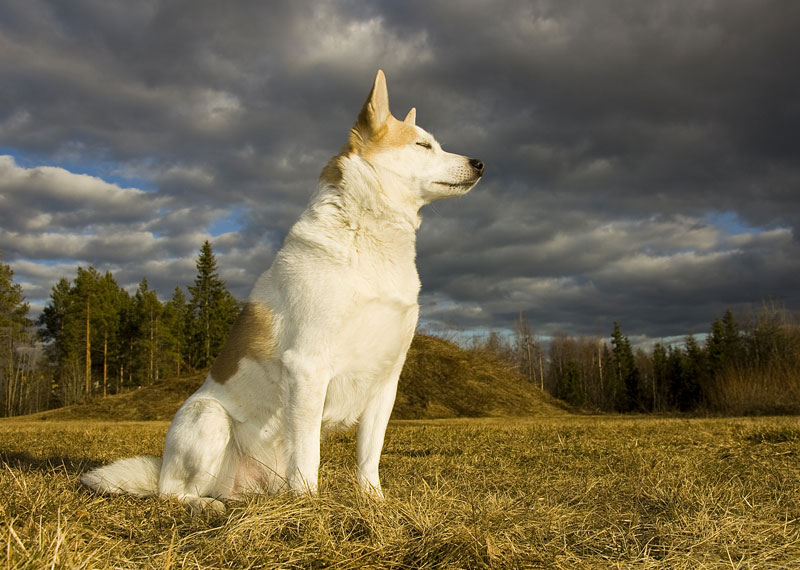 The Norrbottenspets is a dog breed of the spitz type. It is an ancient breed whose original purpose was a farm and hunting dog but has recently became more popular as a companion dog. The Norrbottenspets is used to hunt wood grouse, black grouse, capercaillie and hazel grouse, but also fox, marten and raccoon. Some individuals are also effective with mammals as large as moose and grizzly bear. Norrbottenspets was formerly used in hunting squirrels, when squirrel fur was valuable in the beginning of 20th century and earlier.

The breed originated in Norrbotten, Sweden and Lappland/Kainuuland, Finland, and have been documented as early as the 17th century. Sweden and Finland argue about the true home of the Norrbottenspets, but clearly the dog has spent much time in both countries. The dogs were mainly used as hunting companions. By the end of World War I, the Norbottenspets came close to extinction. Due to the very small number of norrbottens, Sweden closed its studbook in 1948. Although some dogs were preserved, they were in a non-Swedish speaking area and in the far north as a farm dog and companion. Enthusiasts sought out the few remaining dogs and started a successful breeding program between the 1950s and early 1960s. FCI confirmed a new breed standard in 1966 and the official name was confirmed as Norrbottenspets. In 1967 the Swedish Kennel Club accepted the breed for registration and a new standard was written. Finland accepted the standard and began registering dogs in 1973. In Finland these dogs are called Pohjanpystykorva. Immigrant farmers have given the dog an even longer name, Norbottens-skollandehund. There is a great effort in Finland to ensure the health of these fox-like hunting dogs and breeding is highly controlled. Healthy animals, that are only distantly related, are being bred with careful consideration of breeding consultants to create a strong background. Sweden has also had a dramatic impact on the preservation of this breed through strict breeding practices.