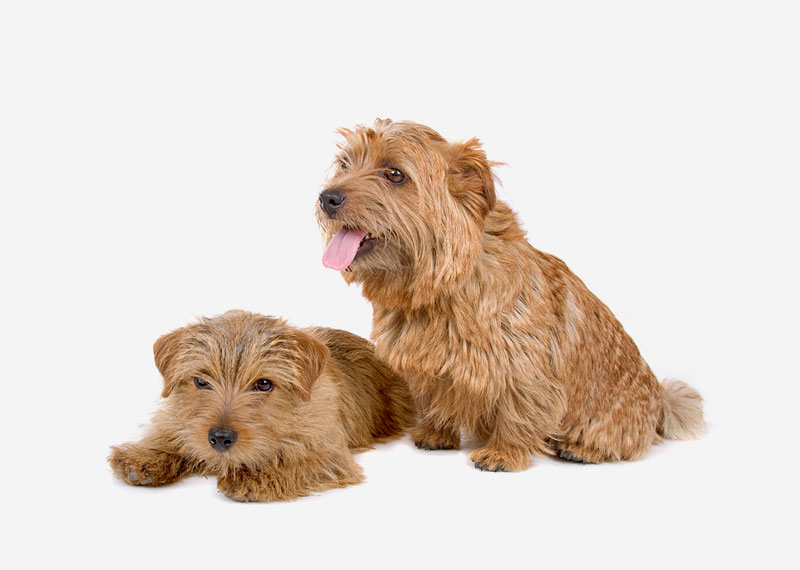 The Norfolk Terrier is a British breed of dog. Prior to gaining recognition as an independent breed in 1960, it was a variety of the Norwich Terrier, distinguished from the "prick eared" Norwich by its "drop ears" (or folded ears). Together, the Norfolk and Norwich Terriers are the smallest of the working terriers.

In the 1880s, Great Britain sportsmen developed a working terrier of East Anglia in eastern England. The Norwich Terrier and later the drop-eared variety now known as the Norfolk Terrier, were believed to have been developed by crossing local terrier-like dogs, small, short-legged Irish Terrier breeds and the small red terriers used by the Romani people ratters of Norfolk (the county in which Norwich the city exists).They were first called the Cantab Terrier when they became fashionable for students to keep in their rooms at University of Cambridge in England. Later, they were called the Trumpington Terrier, after Trumpington Street where the breed was further developed at a livery stable. Then, just prior to World War I, a prominent Irish horse rider Frank Jones sold quantities of the short-legged terriers to the USA, so there they were called Jones Terriers. It was Jones who designated the terriers were from Norwich.In 1932, the Norwich was granted acceptance into the English The Kennel Club and the first written standard was created. The American Kennel Club registered the first Norwich Terrier in 1936. In 1964, The Kennel Club reclassified the drop-ear variety as it its own breed, the Norfolk Terrier, and the prick-eared variety retained the name Norwich Terrier. The American Kennel Club and Canadian Kennel Club both recognized the division of the Norwich Terrier breed in 1979. The Norfolk Terrier was recognized by the United Kennel Club in 1979. After many generations, these two breeds have developed as two distinct breeds both in physical looks and in temperament. Of note, there is literature that suggests that the Norfolk and Norwich were always two distinct breeds and the original mistake was classifying them as one.

The life expectancy of a Norfolk Terrier is 8–14 years, with some growing as old as 17 years. Norfolks do have incidences of mitral valve disease, luxating patellas, and incorrect bites (where the teeth do not align with the breed standard, i.e. overshot or undershot). Norfolks most often have shallow hip sockets and many breedlines are dysplastic. There has never been a Norfolk Terrier recognized by the Orthopedic Foundation for Animals (OFA) as having "excellent" rated hips. Therefore responsible breeders are testing for Hip dysplasia (canine). Breeders that do not radiograph hips and have them evaluated by either OFA or PennHip, cannot answer questions regarding hip dysplasia in their breeding program.Norfolks generally have medium to small litters. Responsible breeders only breed healthy dogs who are of good temperament, good pedigree lineage and best reflect the breed standard. The demand for Norfolk is far greater than the supply. The environment in which they are raised directly impacts the temperament of the puppy for its lifetime.