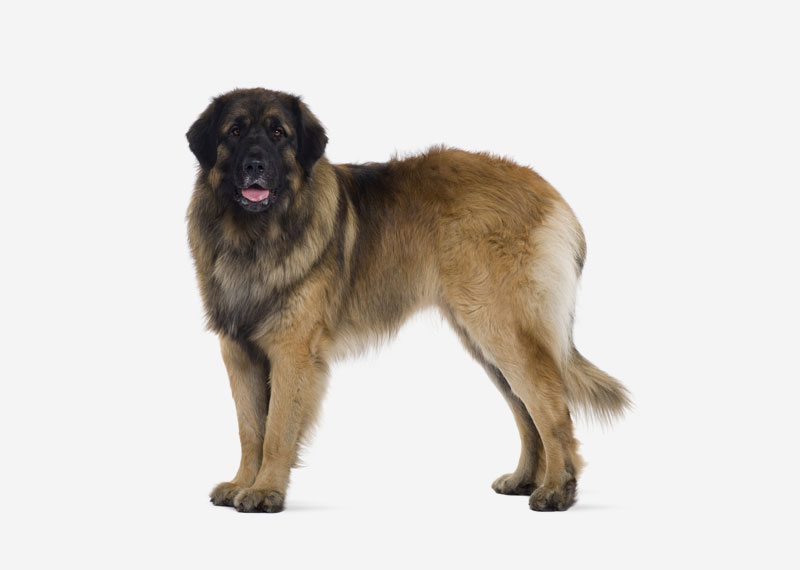 The Leonberger is a giant dog breed. The breed's name derives from the city of Leonberg in Baden-Württemberg, Germany. According to legend, the Leonberger was ostensibly bred as a 'symbolic dog' that would mimic the lion in the town Crest (heraldry). It is in the Working Group (dogs) for dog shows such as Crufts, but not at the World Dog Show.

In the 1830s, Heinrich Essig, a dog breeder and seller and mayor of the town of Leonberg near Stuttgart in Baden-Württemberg, Germany, claimed to have created the Leonberger by crossing a female Landseer Newfoundland with a "Barry" male from the Great St. Bernard Hospice and Monastery (which would later create the St. Bernard breed). Later, according to Essig, a Pyrenean Mountain Dog was added, resulting in very large dogs with the long white coats that were the fashion for the time, and pleasant temperament. The first dogs registered as Leonbergers were born in 1846 and had many of the prized qualities of the breeds from which they were derived. The Leonberger dog became popular with several European royal households, including Napoleon II, Empress Elizabeth of Austria-Hungary, the Prince of Wales, Otto Von Bismarck, Emperor Napoleon III and Umberto I of Italy. Essig's claim of breeding the dog as described is disputed. At least as early as 1585, the royal household of Austrian Prince Franz Metternich, of Wolfberg, father of Prince Metternich, owned dogs of the same description. Either way, there is no doubt that Essig named and registered the breed first. A black and white engraving of the Leonberger was included in "The Illustrated Book of the Dog" by Vero Shaw (at p. 488) in 1881.The modern look of the Leonberger, with darker coats and a black masks, was developed during the latter part of the 20th century by re-introducing other breeds, such as the Newfoundland. Leonbergers today can have their ancestry traced to the eight dogs that survived World War II.Traditionally, Leonbergers were kept as farm dogs and were much praised for their abilities in watch and draft work. They were frequently seen pulling carts around the villages of Bavaria and surrounding districts. The breed continues in that role today, along with the Newfoundland, Labrador Retriever and Golden Retriever dogs; they are used at the Italian School of Canine Lifeguard.The Leonberger received American Kennel Club recognition as a member of the Working Group on January 1, 2010, alongside the Icelandic Sheepdog and the Cane Corso. It was the 167th breed to be recognized by the AKC.

Leonbergers are strong, generally healthy dogs. Hip dysplasia, which devastates many large breeds, is largely controlled because of the effort of many breeders who actively screen their Leonbergers using x-rays evaluated by the Orthopedic Foundation for Animals and leave dysplastic specimens out of the gene pool, thereby reducing the risk of bone/joint problems. For over twenty years, breeders belonging to the Leonberger Club of America, which issued pedigrees for the Leonberger breed in America, adhered to many aspects of the German breeding program whereby member kennels may only choose to breed dogs that were certified as three generation free of hip dysplasia. As a likely result, the incidence of hip dysplasia in the breed was reduced to almost 10% and the occurrence of OFA rated "Excellent" hips increased by over 60% in just twenty years. which is about 4 years less than the average purebred dog, but typical of similarly sized breeds.Unfortunately, there are some serious diseases that can affect the Leonberger. Certain types of cancers are very common in the breed. Bloat, commonly called "Bloat", is another serious condition that affects many of the large and giant breed dogs, particularly those with deep chests. It causes the stomach to twist and can be fatal quite quickly. Adult Leonbergers should always be fed twice a day rather than one large meal in order to reduce the likelihood of bloat. Leonbergers are not alone in inheriting serious diseases and according to the University of Sydney's LIDA taskforce, Leonbergers have relatively few health issues compared to other dog breeds. In a 2004 UK Kennel Club survey, the most common causes of death were cancer (45%), cardiac (11%), and "unknown" (8.5%). In a 2000 USA/Canada Leonberger Club of America survey, the most common causes of death were cancer (37%), old age (12%), cardiac (9%), and "sudden death" (8%).Studies have indicated problems with inherited polyneuropathy in certain populations of Leonbergers and cataracts in dogs in the United Kingdom. A study of "Leonberger polyneuropathy" is underway and sponsored by the American Kennel Club. Genetic testing is to be done through a protocol administered in North America by the University of Minnesota Veterinary Diagnostic Laboratory.