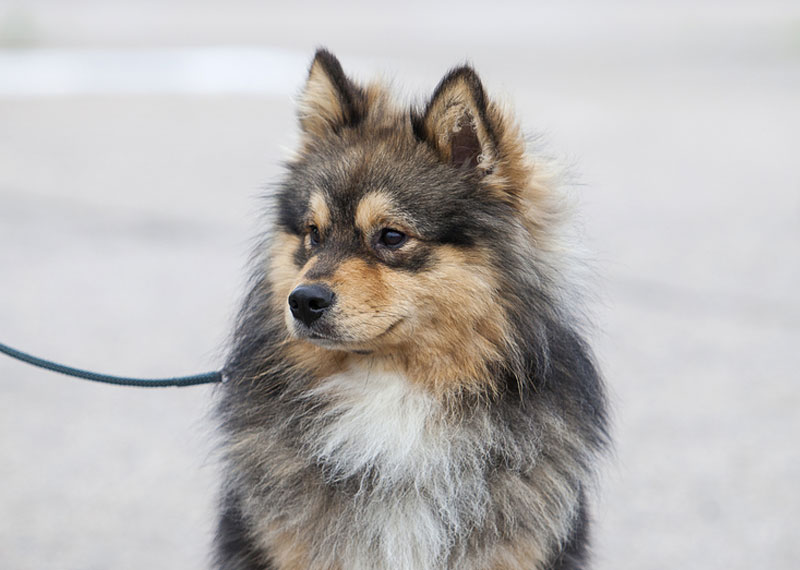 The Lapponian herder (Lapinporokoira or Lapp Reindeer dog or Lapsk Vallhund) is a breed of dog from Finland, one of three Lapphund breeds developed from a type of dog used by the Sami people for herding and guarding their reindeer.

The Sami people of northern Europe (who consider the term Lapp to be insulting) used Spitz Dog type herding dogs in managing their herds of reindeer for a very long time. Such dogs were not of modern breeds of documented heritage, and did not have a fixed appearance, but rather were a landrace type of herding dog. Although Swedish and Finnish Animal fancy began collecting information about the type in the 1930s, most of the dogs were lost as a result of World War II.After the war various breeders in Sweden and Finland began to try to recreate the lost reindeer herding dogs in their various forms. In Finland, the first was recognised as the Kukonharjulainen (a kennel name) by the Finnish Kennel Club. The breed was a few of the herding dogs crossed with black and white Karelian Bear Dogs, resulting in a short-coated dog. Other breeders with another kennel club in Finland created another breed, this one with a more heavy coat, called the Lapponian Herder. In the late 1950s and early 1960s, more dogs were collected, and assigned to one of the two varieties based on their appearance. Around the same time the two kennel clubs merged, and all the Finnish reindeer dogs were placed in the same registry. In 1966 they were separated again, based on coat length. One breed was renamed Finnish Lapphund at that time, and the other was named Lapinporokoira (translated into English as the Lapponian Herder.)The Lapinporokoira is recognised under Finnish sponsorship as Fédération Cynologique Internationale breed number 284, in Group 5 Spitz and primitive types Section 3 Nordic Watchdogs and Herders. The stud book for the breed remains Open stud book. Exported to North America, it is recognised there by the United Kennel Club in the Herding Group (the United Kennel Club places the Finnish Lapphund in the Northern Breed Group.) It is also recognised by various minor kennel clubs and internet based dog registry businesses, and promoted as a Rare breed for those seeking a unique pet.