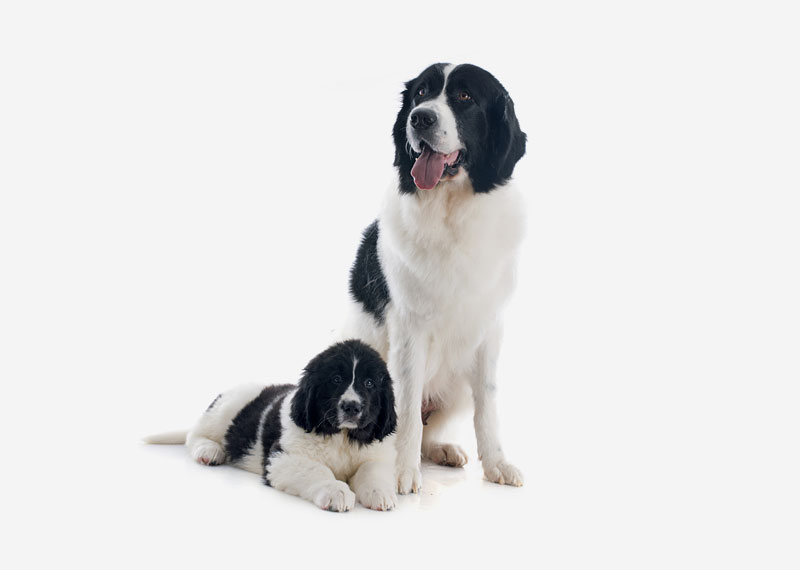 The Landseer is a dog breed. Many kennel clubs consider the Landseer to be simply a black-and-white variant of the Newfoundland, but the Fédération Cynologique Internationale recognizes it as a separate breed. This separate breed is called Landseer European Continental Type (E.C.T.).

The breed was named after the British painter Sir Edwin Henry Landseer, because in 1838 he created the painting A Distinguished Member of the Humane Society, which shows a dog of this breed.

Because of their good swimming skills these dogs were utilized by fishermen to tow nets to the shore. They were also noted for their ability to help drowning people. Therefore these dogs were bought and sold mainly by European fishermen. It is believed that, by and large, the exportation of these dogs occurred during the late 18th century. However, paintings show us that these dogs must have already existed in England in the early 18th century.

Because of their impressive appearance they were the subject of numerous books and paintings. The most famous painting of this large white and black dog is a portrait called "A Distinguished Member of Humane Society" done by the renowned English animal painter Sir Edwin Landseer in 1838. In fact the subject matter of many of Sir Edwin’s paintings focused on these dogs. The dog portrayed in one of the most famous paintings is believed to have saved more than 20 people from drowning. It therefore was adopted as a member of the humane society. The breed was eventually named in honor of Sir Edwin.

Unfortunately by the end of the 19th century the Landseer Continental Type were not recognizable. Some breeders attempted to build the breed back up in the beginning of the 1900 but their efforts were thwarted during World War I when most of the dogs were killed. After World War I some enthusiastic breeders in the Netherlands, Germany and Switzerland began breeding these dogs again. Between 1945 and 1960 the Landseer Continental Type was bred as a part of the Newfoundland Clubs in Europe.

As the dogs had many differences to the Newfoundland and the popularity of the Landseer CT grew the breed was recognized as a separate breed by the FCI in 1960. The breed was registered and its popularity continues to soar. The breed spread and can now be seen all over Europe.