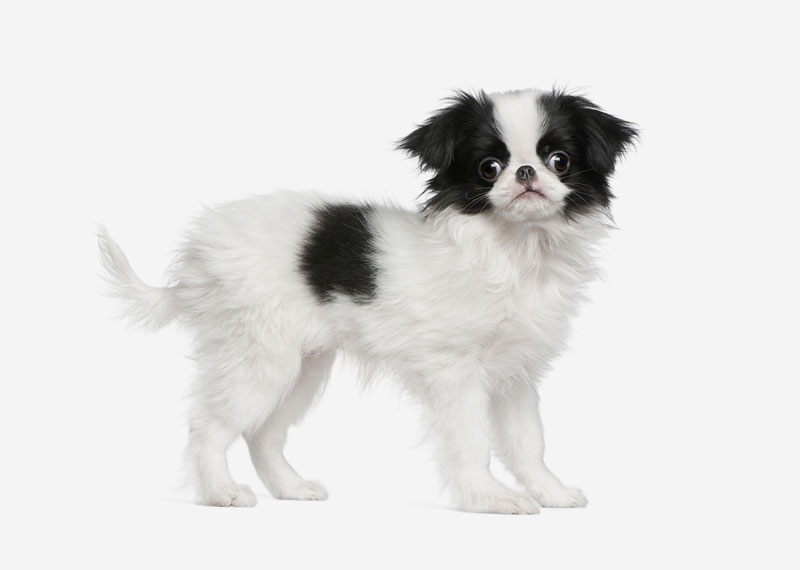 The Japanese Chin (Japanese: 狆, chin), also known as the Japanese Spaniel, is the dog of Japanese royalty. A lap dog and companion dog, this toy dog dog breed has a distinctive heritage.

The true origin of the Chin is widely debated. It is widely agreed that the source breed for the Japanese Chin originated in China. These dogs were brought to Japan around 732. Some maintain the ancestors of these dogs first appeared in Japan around the year 732, as gifts from the List of monarchs of Korea, while others maintain that they were given as gifts to the Empress of Japan as early as the mid-6th century to 7th century, and even some saying they came to Japan as recently as around the year 1000.The Japanese created a breed so distinct from other dogs, that in Japan it was considered something different, distinct from a "dog" which was considered a working/helper animal whereas the Japanese Chin was considered strictly for pleasurable companionship. Its distinct appearance and personality eventually captured the hearts of Japanese Royalty and resulted in ownership being restricted to those of royal and noble blood.Each Japanese clans bred to their own standards. Because of this, there are many variations of the Chin in any area from size to coat density, eye set, personality, whether they are compact and well-muscled or slender-boned and fragile in appearance, etc. Once introduced to the West, a strong desire for the smaller 10 lbs or less version of the Japanese Chin came to dominate and become the standard of various kennel clubs around the world. Professor Ludwig von Schulmuth studied canine origins by studying the skeletal remains of dogs found in human settlements as long as the 8th millennium BC. The Professor created a genealogical tree of Tibetan dogs that shows the "Gobi Desert Kitchen Midden Dog", a scavenger, evolved into the "Small Soft-Coated Drop-Eared Hunting Dog". From this dog evolved the Tibetan Spaniel, Pekingese, and Japanese Chin`. Another branch coming down from the "Kitchen Midden Dog" gave rise to the Papillon and Long-haired Chihuahua and yet another "Kitchen Midden Dog" branch to the Pug and Shih Tzu.Though there is some documentation that indicates Portugal sailors introduced the breed to Europe in the 17th century by presenting some to Catherine of Braganza, Queen Consort to List of English monarchs Charles II of England, there is more credible evidence that the first Chin were gifted by the Emperor of Japan to an American naval officer, Matthew Calbraith Perry, when Perry visited the Orient in 1853 to open trade with the East. Perry was gifted with a total of seven (7) Chin; however, only two survived the passage back. Again, there is controversy over whether Perry gave the two to Franklin Pierce, List of Presidents of the United States, gave them to James Stirling (Australian governor), Rear admiral of the Royal Navy to take to Victoria of the United Kingdom or gave them to his daughter, Caroline Slidell, after returning from Japan. Caroline was the wife of August Belmont.

This breed's flattened face contributes to a few Chin suffering from breathing and heart problems, as is common with Cephalic_index#Brachycephalic_animals. Because they are a brachycephalic breed, temperature extremes (particularly heat) should be avoided. Luxating patellas (knees) and heart murmurs are other genetically predisposed conditions. The oversized eyes are easily scratched and corneal scratches or more serious corneal ulcers in animals can result. Mild scratches benefit from topical canine antibacterial ointment specifically for eye application; more serious injury or ulcerations require urgent medical care. The Chin, as with most small breed dogs, can also have a risk of hypoglycemia when under the age of 6 months; this concern can continue in Chin that mature at 4 to 5 pounds or less. Some Chin do have seasonal allergies.A UK Kennel Club survey puts their median lifespan at 9.25 years though some have been known to live into their 20s.