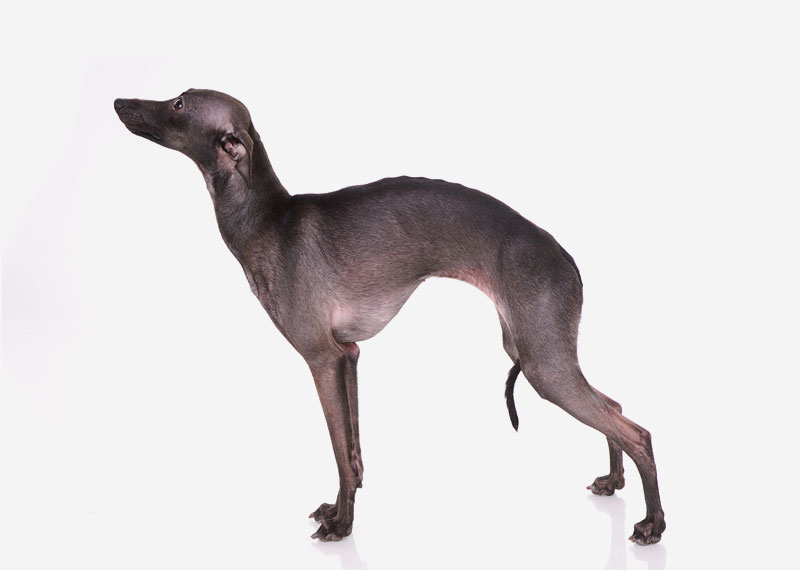 The Italian Greyhound is a small breed of the sight hound Dog type, sometimes called an "I.G.". The true breed origins are unknown.

The grace of the breed has prompted several artists to include the dogs in paintings, among others Diego Velázquez, Pisanello and Giotto di Bondone.The name of the breed is a reference to the breed's popularity in Renaissance Italy. Mummy dogs very similar to the Italian Greyhound (or small Greyhounds) have been found in Egypt, and pictorials of small Greyhounds have been found in Pompeii, and they were probably the only accepted companion-dog there. Dogs similar to Italian Greyhounds are recorded as having been seen around Emperor Nero's court in Rome in the first century AD.Although the small dogs are mainly companionship dogs they have in fact been used for hunting rats or mice, often in combination with hunting. It is believed that this was the reason they were bred in the first place by the Greeks.The Italian Greyhound is the smallest of the family of gazehounds (dogs that hunt by sight). The breed is an old one and is believed to have originated more than 2,000 years ago in the countries now known as Greece and Turkey. This belief is based on the depiction of miniature greyhounds in the early decorative arts of these countries and on the archaeological discovery of small greyhound skeletons. By the Middle Ages, the breed had become distributed throughout Southern Europe and was later a favorite of the Italians of the sixteenth century, among whom miniature dogs were in great demand. Sadly, though, 'designer' breeders tried, and failed, to make the breed even smaller by crossbreeding it with other breeds of dogs. This only led to mutations with deformed skulls, bulging eyes and dental problems. The original Italian Greyhound had almost disappeared when groups of breeders got together and managed to return the breed to normal. From this period onward the history of the breed can be fairly well traced as it spread through Europe, arriving in England in the seventeenth century.

The Italian Greyhound has a median lifespan of 13.5 in a 2004 UK Kennel Club survey. A 1993 US breed club survey gives an average lifespan of 9 years but more than a quarter of the dogs had "accidents" recorded as cause of death.Health problems that can be found in the breed:

Responsible breeders will routinely check their dogs for the onset of various inherited disorders, these commonly include (but are not limited to): examinations on eyes, patellar examinations, thyroid function panels, von Willebrand's factor, hip and Legg-Perthes disease x-rays, and others. In research by the Ortheopedic Foundation for Animals, the Italian Greyhound was found to be the least affected by Hip dysplasia (canine) out of 157 breeds. Tests were conducted on 169 individual Italian Greyhounds, of which none were found to have hip dysplasia and 59.2% scored excellent on their hip evaluations.