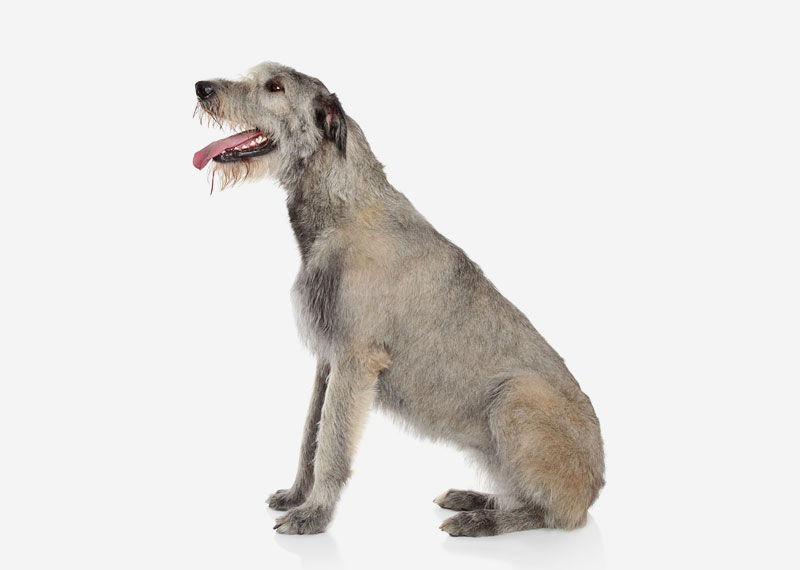 The Irish Wolfhound is a breed of domestic dog (Canis lupus familiaris), specifically a sighthound. The name originates from its purpose (wolf hunting with dogs) rather than from its appearance. The breed was originally developed from Dogs in warfare to one used for hunting and Guard dog. Irish Wolfhounds can be an imposing sight due to their formidable size; they are the tallest of all dog breeds.

The breed is very old; there are suggestions it may have been brought to Ireland as early as 7000 BC. These dogs are mentioned, as cú (variously translated as hound, Irish hound, war dog, wolf dog, etc.) in Irish laws and in Irish literature which dates from the 5th century or, in the case of the Early Irish literature, from the old Irish period - AD 600-900. The word "Cu" often became an added respected prefix on the names of warriors as well as kings denoting that they were worthy of the respect and loyalty of a Cu.

Ancient wood cuts and writings have placed them in existence as a breed by 273 BC. However there is indication that huge dogs existed even as early as 600 BC when the Tectosages and Tolistobogii Celts Gallic invasion of the Balkans#Attack on Delphi. Survivors left accounts of the fierce Celts and the huge dogs who fought with them and at their side. They were mentioned by Julius Caesar in his treatise, Commentarii de Bello Gallico, and by 391 AD, they were written about by Roman Consul, Quintus Aurelius Symmachus, who received seven of them, "canes Scotici", as a gift to be used for fighting lions, bears, that in his words, "all Rome viewed with wonder".Wolfhounds were bred as hunting dogs by the ancients, who called them Cú Faoil. The Gael (Ancient people) continued to breed them for this purpose, as well as to guard their homes and protect their stock. Cúchulain, a name which translates literally as "hound of Culain", gained his name when as a child, known then as Setanta, he slew the ferocious guard dog of Culain forcing him to offer himself as a replacement.References to the Irish wolfhound in the 18th century tell of its great size, strength and greyhound shape as well as its scarcity. Writing in 1790, Bewick described it as the largest and most beautiful of the dog kind; about 36 inches high, generally of a white or cinammon colour, somewhat like the Greyhound but more robust. He said that their aspect was mild, disposition peaceful, and strength so great that in combat the Mastiff or Bulldog was far from being an equal to them. The last wolf in Ireland is thought to have been killed at Myshall, Co Carlow in 1786 by a pack of wolfdogs kept by a Mr Watson of Ballydarton. The remaining hounds in the hands of a few families who were mainly descendants of the old Irish chieftains, were now symbols of status rather than hunters, they were said to be the last of their race.

Englishman Captain George Augustus Graham is responsible with a few other breeders for reaffirming the dogs' existence. In 1879 he wrote: "It has been ascertained beyond all question that there are few specimens of the breed still left in Ireland and England to be considered Irish wolfhounds, though falling short of the requisite dimensions. This blood is now in my possession." Captain Graham devoted his life to ensuring the survival of the Irish wolfhound. Owing to the small numbers of surviving specimens outcrossing was used in the breeding programme. It is believed that
Borzoi, Great Dane, Scottish Deerhound and English Mastiff dogs all played their part in Graham's creation of the dog we currently know. The famous English Mastiff Garnier's Lion was bred to the Deerhound Lufra, and their offspring Marquis enters Wolfhound pedigrees through his granddaughter Young Donagh. Graham included "a single outcross of Tibetan Wolf Dog". This was long assumed to have been a Tibetan Mastiff. However, a photograph of "Wolf" shows a bearded, long-coated dog - what would now be called a "Kinnaur Sheepdog" or "dokhyi apso". In 1885 Captain Graham with other breeders founded the Irish Wolfhound Club, and the Breed Standard of Points to establish and agree the ideal to which breeders should aspire.The Irish Wolfhound is sometimes regarded as the national dog breed of Ireland but in fact no breed has ever been officially adopted as such. The Wolfhound was historically a dog that only nobles could own and was taken up by the British during their rule in Ireland. This made it unpopular as a national symbol and the Kerry Blue Terrier was adopted by Republicans such as Michael Collins (Irish leader). However, in recent years, the Wolfhound has been adopted as a symbol by both rugby football, which are organised on an All-Ireland basis. The Ireland national rugby league team are nicknamed the wolfhounds, and the Irish Rugby Football Union, which governs rugby union, changed the name of the country's A (second-level) national team in that code to the Ireland Wolfhounds in 2010.

Like many large dog breeds, Irish Wolfhounds have a relatively short lifespan. Published lifespan estimations vary between 6 and 10 years with 7 years being the average. Dilated cardiomyopathy#Dilated cardiomyopathy in dogs and cats and osteosarcoma are the leading cause of death and like all deep-chested dogs, gastric torsion (bloat) is common; the breed is affected by hereditary intrahepatic portosystemic shunt.In a privately funded study conducted under the auspices of the Irish Wolfhound Club of America and based on an owner survey, Irish Wolfhounds in the United States from 1966 to 1986 lived to a mean age of 6.47 and died most frequently of bone cancer. A more recent study by the UK Kennel Club puts the average age of death at 7 years.Irish wolfhounds should not receive additional supplements when a good dog food is used. It is generally accepted that they should be fed a low protein adult dog food (19 to 21% protein) from puppyhood onward. Most breeders today recommend that they not be supplemented to slow their rapid growth.Irish wolfhounds are the tallest of all dog breeds, sometimes reaching 7 feet tall on their hind legs. They are well suited to rural life, but their medium energy profile allows them to adjust fairly well to suburban and urban life as well, provided they receive appropriate exercise.Genetically, the Irish wolfhound as a breed is threatened by a Population bottleneck related to the over-use of a Popular sire effect.