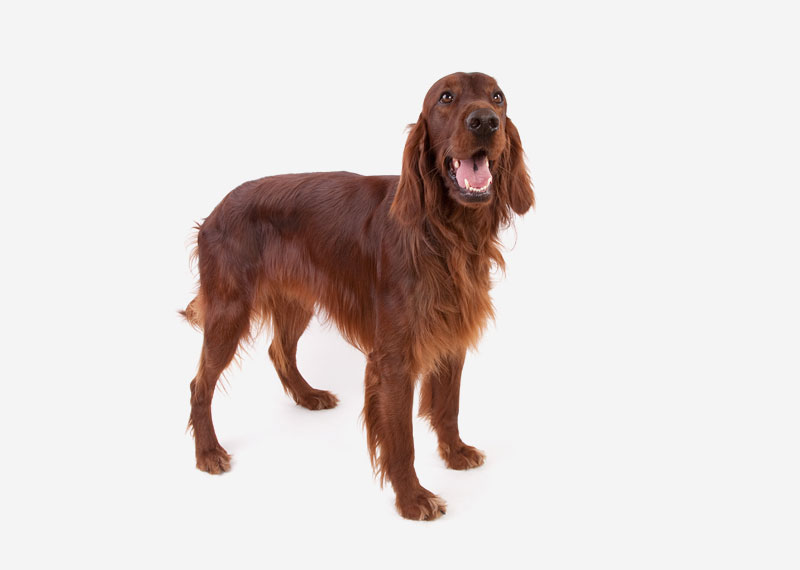 One of the first references to the 'Setter,' or setting dog, in literature can be found in Caius's De Canibus Britannicus, which was published in 1570 (with a revised version published in 1576). Translated from the original Latin, the text reads:

The Dogge called the Setter, in Latine, Index: Another sort of Dogges be there, serviceable for fowling, making no noise either with foote or with tongue, whiles they follow the game. They attend diligently upon their Master and frame their condition to such beckes, motions and gestures, as it shall please him to exhibite and make, either going forward, drawing backeward, inclinding to the right hand, or yealding toward the left. When he hath founde the byrde, he keepeth sure and fast silence, he stayeth his steppes and will proceede no further, and weth a close, covert watching eye, layeth his belly to the grounde and so creepth forward like a worme. When he approaches neere to the place where the byrde is, he layes him downe, and with a marcke of his pawes, betrayeth the place of the byrdes last abode, whereby it is supposed that this kind of dogge is calles in Index, Setter, being in deede a name most consonant and agreeable to his quality."

It would be incorrect to assume the dog described above in any way resembles the Irish Setter (or any Setter) as we know the breed today. Caius was referring to a type of setting spaniel, most likely now extinct. The description of the work undertaken by this early pillar of the breed resembles the working behaviour of modern Irish Setters. Of this early dog, Caius went on to write: "The most part of theyre skinnes are white, and if they are marcked with any spottes, they are commonly red, and somewhat great therewithall." If this is the case, it is safe to assume the solid red colouring of today's Irish Setter came about by selective breeding practices.

Further reference to Setters in early literature can be found in The Country Farme by Surflet and Markham, published in 1616. They wrote: "There is also another sort of land spannyels which are called Setters."

It is clear that, by the early 18th Century, the type of dog known as the 'Setter' had come into its own right. It is also clear the Irish had begun actively breeding their own type. For example, the de Freyne family of French Park began keeping detailed stud records in 1793. Other prominent landed Irish gentry also known to have been breeding setter lines at the same time include Lord Clancarty, Lord Dillon, and the Marquis of Waterford.

It was noted as early as 1845 that Setters in Ireland were predominantly either red, or, according to Youatt, "...very red, or red and white, or lemon coloured, or white patched with deep chestnut." Clearly, the preference for a solidly-coloured dog was having an effect on the appearance of the typical Irish-bred setter.

The Breed Standard for the modern Irish Setter was first drawn up by the Irish Red Setter Club in Dublin and approved on 29 March 1886. It consisted of a 100-point scale, with a given number of points awarded for each of the dog's physical attributes. The points system was later dropped; however, aside from some minor changes, the Standard remains largely unchanged today in most countries where the breed is formally recognised.

Irish Setters tend to be a very healthy breed. Problems that have been noted in Irish Setters include: Hip dysplasia, cancer, progressive retinal atrophy (PRA), epilepsy, entropion, hypothyroidism, hyperosteodystrophy, bloat (a.k.a. gastric torsion), osteosarcoma, Von Willebrand's disease, patent ductus arteriosus, canine Leukocyte adhesion deficiency (CLAD) and celiac disease. It should be noted that Irish Setters are now one of the few breeds for which genetic tests have been developed to detect the presence of both CLAD and PRA (RCD-1).