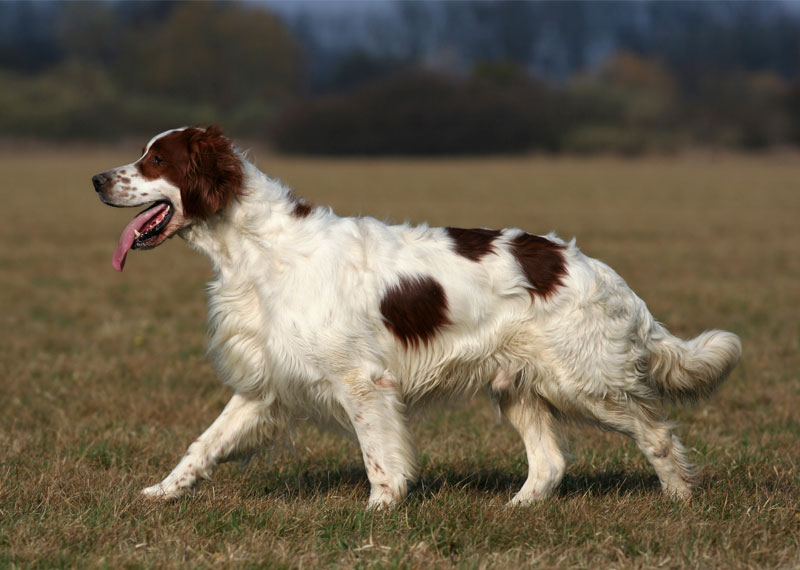 The Irish Red and White Setter is a breed of dog, more specifically a setter. As with all the setters and the Pointer, it is classified as a Gun dog in the UK and is included in the sporting group in America and Canada. It is virtually identical in use and temperament to the related Irish Setter and its other setter cousins, the Gordon Setter and English Setter setters, but is more often found as a working gun dog. The original purpose of the breed was to hunt gamebirds. In the UK, their quarry can be partridge or grouse, pheasant, Rock Ptarmigan, blackgame, snipe or woodcock as all these birds try to avoid predators by hiding rather than flying away. Overseas bird dogs are used to hunt quail, Willow_Ptarmigan, sand grouse, guinea fowl, Centrocercus, francolin.Despite the breed's early origins, it almost became Extinction until dedicated breeders managed to revive interest and restore the Irish Red and White setter to a viable position. It is still in a vulnerable position but has gained recognition from all major kennel clubs.

'Setting dogges' – an ancient term for setters, were developed to indicate the whereabouts of game birds and a dog would have been used for this in Roman times. The dog would find the location of the game birds by scenting the air; either freeze in a position standing or crouching down then slowly creep forward on command to disturb the birds into flight. Once the birds were in flight the hunter who had been following the dog would release hawks to capture the birds in the air. When netting superseded the use of hawks, setting dogs would still be used to indicate the whereabouts of the birds but the hunter would come up behind the dog and throw a net over the birds. In the mid-1600s, guns became more readily available and shooting game birds became a popular pastime of the landed gentry. The basic work of setters was still to find and point to the location of game birds but it also had to be steady to shot.By the 17th century 'setting dogges' had become established and the breeds as seen in the present day could be identified as Setters. Interbreeding of the different colours was still be taking place during this period but it gradually changed and sportsman (breeders) started to segregate matings to dogs adapted to the terrain it was required to work on.Originally, setters in Ireland were mostly red or the parti-colour red and white or even nearly all white dogs. All were accepted as Irish Setters and were mated to each other.As late as 1875 at a conformation show in Dublin, there were 66 entries in the Irish Setter classes; 23 of this entry were red and white. At a show in Cork the next year, in an entry of 96, there were 36 red and whites. This was when the fashion for solid coloured red setters began and the decline in red and white setter numbers continued. The popularity of the solid red Irish Setter in both America and Ireland gained strength as they attracted very high prices, all adding to the demise of the red and white almost to the point of extinction. A handful of breeders in remote parts of Ireland kept the breed alive.A small number of breeders were active from 1775 to the end of the 19th century. The Rossmore family of County Monaghan in Ireland, had a strain of red and whites dating back to the mid 18th century and this line was preserved into the 20th century. The family still own many paintings of these dogs. During the breed's history, red and white setters were sometimes referred to as Rossmore Setters. Other owners recorded at this time included Reverend Mahon of Castlegar, County Galway, Yelverton O'Keefe, Maurice Nugent O'Connor and Miss Lidwell whose name was sometimes mis-spelt as Ledwich. The dogs from these strains were all particularly known for their working abilities.

Thanks to the efforts of an early 20th-century Northern Ireland clergyman, Noble Huston, the breed survived, but only in small numbers in the island of Ireland. From around 1970, a revival of the breed was planned, and the numbers began to increase slowly. The Irish Kennel Club approached the Irish Red Setter Club during 1976 to ask if it was willing to help oversee the revival of the Irish Red and White Setter.Partly through the endeavours of the Irish Red & White Setter Field & Show Society, which was formed in 1981, the breed became well established and received national and international recognition. Irish Red and White setters successfully compete in conformation shows and field trials attaining champions in both disciplines.Many individuals contributed to the breed's successful revival. Rev Huston kept a note of his litters in the parish register. He did not have official Pedigree but did engage in lengthy correspondence with Maureen Cuddy (then Clarke), whose kennel name was 'Knockalla". In a letter to Cuddy, Rev Huston wrote: "...the present Red and Whites are not a new breed nor a revived breed (like the Irish Wolfhound) but a continued breed..." It was through Cuddy's meticulous record keeping and research that in 1974 the Irish Kennel Club finally accepted that the pedigrees of the few remaining red and whites were accurate.It is likely that the revived generations of Irish Red and White Setters descend from a puppy bitch Cuddy nursed to health in 1940. This bitch was named 'Judith Cunningham of Knockalla'.By the 1980s, red and white setters were being imported into Great Britain, where the breed was developed more as a show dog. Interest in Great Britain had particularly been revived after Alan and Ann Gormley from Dublin exhibited an Irish Red and White at Crufts in 1980. This was 'Harlequin of Knockalla' who was bred by Cuddy in 1977. Harlequin had qualified for Crufts due to his success at shows in Ireland, but the Gormleys were more interested in showing their dogs than in working them. Harlequin did prove he could work while young, but an error with the paperwork meant his qualifying test at a field trial was never correctly recorded.The breed was little known in Britain and the Kennel Club had inadvertently listed Harlequin's Crufts entry among the Irish Setters. This was the trigger for great interest in the breed, as it proved the breed was not extinct as was believed.Irish Red and White setters bred by the Gormleys under their kennel name of 'Meudon' proved influential worldwide as their red and whites were exported to Italy, America and Holland as well as to the UK.In contrast to these British dogs, the breed has continued to be primarily a working and field trial dog in Ireland.From 1 January 2009, the Irish Red and White Setter was fully recognised by the American Kennel Club (AKC), and was eligible to compete in conformation and all other competitive fields. The breed had previously been listed on the AKC Foundation Stock Service Program, which is the first step towards a purebred breed gaining recognition in America. The breed was given recognition by the Canadian Kennel Club in May 1999.The breed is recognised by most other national Kennel Clubs. All registered Irish Red and White Setters are the descendants of the dogs accepted by the Irish Kennel Club at the time of the revival of the breed in the 1970s.It is listed by the Kennel Club in the UK as a Vulnerable Native Breeds. This is because registrations are less than 300 per year.