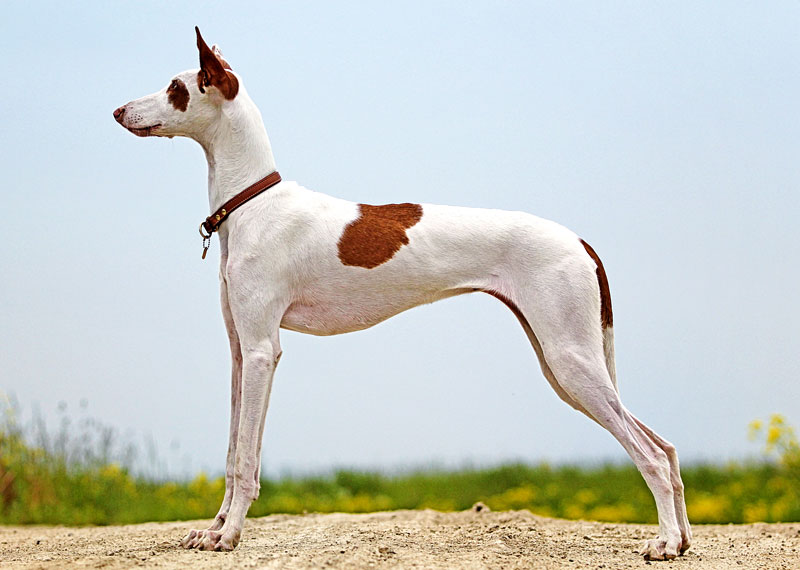 The Ibizan Hound is a lean, agile dog of the hound family. There are two hair types of the dog breed: smooth and wire. The more commonly seen type is the smooth. Some consider there to be a third type, long, but the longhair is most likely a variation of the wire.

This breed originates in the island of Eivissa and has been traditionally used in the Catalan language-speaking areas of Spain and France to hunt rabbits and other small game. The Ibizan Hound is a fast dog that can hunt on all types of terrain, working by scent, sound and sight. Hunters run these dogs in mostly female packs, with perhaps a male or two, as the female is considered the better hunter.Traditionally a farmer may have 1 dog and a very well off farmer 2 dogs to catch rabbits for food. However in the last 20 years it is seen as a sport where between 5 and 15 dogs can be seen in the chase of one rabbit. Mainly on weekends with pack owners from the towns.The Ibizan Hound authority Miquel Rosselló has provided a detailed description of a working trial which characterises their typical hunting technique and action, strikingly illustrated with action photos by Charles Camberoque which demonstrate hunt behaviour and typical hunt terrain.
While local hunters will at times use one dog or a brace, and frequently packs of 6-8 or as many as 15, the working trial requires an evaluation of one or two braces. A brace is called a colla. The couples should be tested on at least 2 to 5 rabbits (not hares), without the use of any other hunting aid. An inspection and evaluation of the exterior, fitness, character and obedience of the dogs is recommended prior to the hunt.
The trial is qualified as having 5 parts. The dogs should show: (1) careful tracking and scenting of the rabbit, without being distracted in the least, 0-30 points; (2) correct signalling of the game, patient stand, strong jump into the air, obedience 0-10 points; (3) chase, giving tongue, speed, sureness, anticipation 0-30 points; (4) putting the game to cover at close quarters, listening, waiting, obedience, correct attack 0-10 point; and (5) good catch or correct indication of the game’s location, retrieval, obedience 0-20 points.Individual dogs are expected to show a great degree of discipline, obedience and co-operation. They should be extremely agile, have good speed and a powerful vertical jump from a stationary position in rough and often heavily covered ground. They should have excellent scent-tracking abilities, give tongue at the right time when approaching the game closely, and otherwise be silent so that they can locate the game by sound. The Ibizan Hound is similar in function and type to several breeds, such as the Pharaoh Hound, the Cirneco dell'Etna, the Portuguese Podengo, and the Podenco Canario. The Ibizan Hound is the largest of these breeds, classified by the Fédération Cynologique Internationale as primitive types.This breed is considered by most experts one of the most ancient dog breeds. It is believed the Ibizan Hound evolves from the tesem, the ancient Egyptian hunting dog. Representations of this dog on the walls of ancient tombs show a striking similarity to the modern Ibizan Hound. These dogs would have been brought to the island of Eivissa by the Phoenicians, who founded settlements there as early as the 8th century BC. A recent DNA analysis
did not find support for this opinion and did not include the Ibizan Hound among their identified ancient dog breeds. A more recent article
argues that continued trait selective breeding may be behind this lack of support. Heidi G. Parker, the lead author of the original study has stated recently that indeed their original findings do not imply that the Ibizan Hound is not an ancient breed and that with better tools they would in all likelihood be able to trace a continuous lineage of thousands of years for many dog breeds and add them to their group of ancient dogs.In the United States, the Ibizan Hound is frequently competed in lure coursing through the AKC and ASFA, and also competes in LGRA straight racing and NOTRA oval track racing. Some parts of the country also use them for coursing live prey, generally jackrabbits.The Ibizan Hound breed is recognized by the Fédération Cynologique Internationale, Continental Kennel Club, American Kennel Club, United Kennel Club, Kennel Club of Great Britain, Canadian Kennel Club, National Kennel Club, New Zealand Kennel Club, Australian National Kennel Council, America's Pet Registry, and American Canine Registry. It was fully recognized by the American Kennel Club in 1979.

The Ibizan Hound is typical of the Hound Group in that it rarely suffers from hereditary illness. Minor health concerns for the breed include seizures and allergies; very rarely, one will see axonal dystrophy, cataract, retinal dysplasia and deafness in the breed. Ibizan Hound owners should have their dogs' eyes tested by a veterinarian before breeding. CERF and BAER testing is recommended for the breed. Ibizan Hounds are sensitive to barbiturate anesthesia, and typically live between 12 and 14 years.