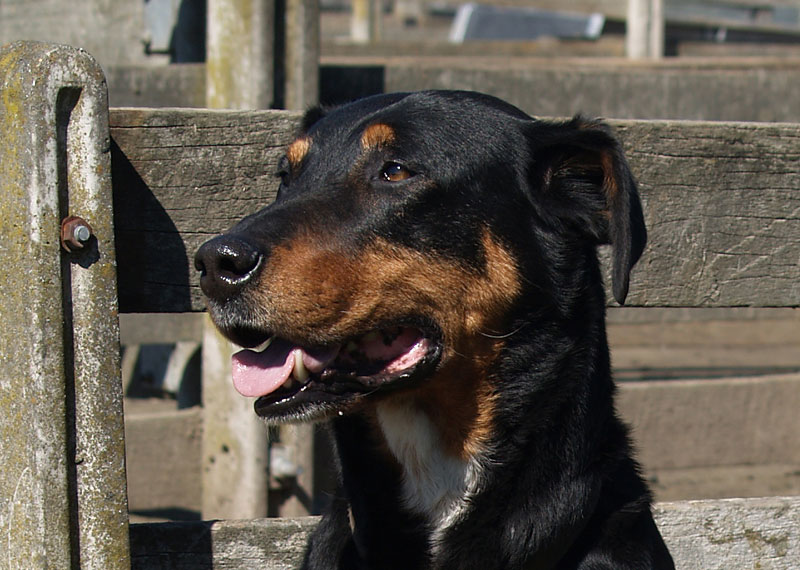 The Huntaway is a large, strongly built breed of dog used for general sheep herding tasks in New Zealand, where they originate, but especially for driving sheep away from the shepherd, hence their name. They are usually black and tan coloured and were bred to use their loud, deep bark to herd sheep. The breed is relatively new, dating as a distinct breed from the late 19th century. Dogs that win at trials may be registered by the New Zealand Sheep Dog Trial Association in their studbook, but the breed does not have a defined appearance or lineage, and is distinguished only on working ability.

The huntaway was developed as a breed in response to farming conditions found in the New Zealand high country. The vast pastoral runs or Stations, such as those in the high country of the South Island, required teams of dogs who could work mustering for days on end, covering great distances on rough steep country. High country stations typically cover many thousands of hectares, and were often unfenced. British sheepdogs used by early New Zealand farmers mostly worked sheep silently, but occasionally a dog would use its bark to herd sheep. This characteristic was liked by some farmers, especially for driving sheep on rough, steep hill country where a dog may disappear from view, making a dog that drives stock by sight less useful. Collies and other working sheepdogs with the barking trait would have been crossed with any other breed that had other desirable traits, including size, stamina and a steady barking ability, as these are the traits that differentiate the huntaway from the heading dog today, but the exact lineage is not known. "Wanted" advertisements for "huntaway sheepdogs" were in the Otago Daily Times newspaper in 1884, heading and huntaway collies were advertised for sale in 1885.
The huntaway was further developed as a separate breed from the heading dog during the 20th Century.As of August 2013 the Huntaway breed was recognised by the New Zealand Kennel Club (NZKC). This is the first recognition of a dog breed of New Zealand origin. There is an NZKC standard for the Huntaway breed, but the standard notes, "It is the opinion of the New Zealand Sheepdog Trial Association that a Huntaway should never be shown, due to the large variance in colour, type and size and the inability to prove in a show ring their core (and only) task of working stock.