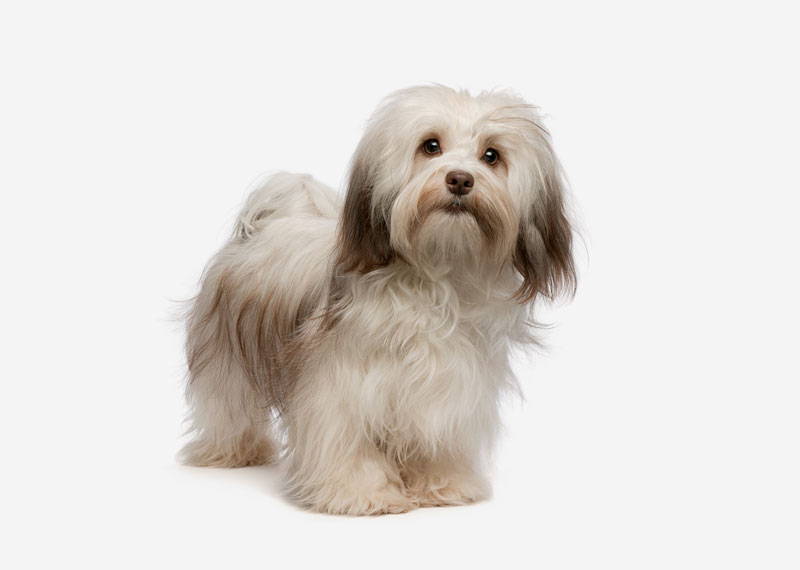 The Havanese is small in size and sturdy in structure with a tail carried over its back and ears that drop and fold. The coat is abundant, long, and silky and comes in all colors. The Havanese has a spirited personality and a curious disposition, and is notable for its springy gait, a characteristic that distinguishes the breed from all others. The Havanese is considered an ideal family pet and a true companion dog. They are highly adaptable to almost any environment. Because of their strong social needs, Havanese will not thrive in an environment where they are isolated for several hours each day.

The Havanese is a member of the Bichon family of dogs. The progenitors of the breed are believed to have come from Tenerife. Ship manifests from Tenerife bound for Cuba list dogs as passengers brought aboard, and these dogs were most probably the dog of Tenerife. Some believe the entire Bichon family of dogs can be traced back to the Tenerife dog, while others theorize that the origins are in Malta, citing the writings of Aristotle, and other historical evidence of the early presence of such dogs in Malta. Whatever the actual origins of Bichon dogs, these little dogs soon became devoted companions to the Spanish colonists in Cuba and were highly admired by the nobility.

As part of the Cuban Revolution, upper-class Cubans fled to the United States, but few were able to bring their dogs. When American breeders became interested in this rare and charming dog in the 1970s, the US gene pool was only 11 dogs. The Havanese breed was only officially recognised by the American Kennel Club as recent as 1996.

With dedicated breeding, and the acquisition of some new dogs internationally, the Havanese has made a huge comeback and is one of the fastest growing breeds of dogs in the American Kennel Club (AKC). The 2013 American Kennel Club Registration Statistics rank the Havanese as the 25th most popular pure-breed in the United States, a rise in popularity from 28th place in 2012.

Havanese are generally healthy and sturdy with relatively few serious health issues. They typically live 14 to 16 years. Havanese organizations, such as the Havanese Club of America, monitor genetic issues to prevent propagation within the breed.