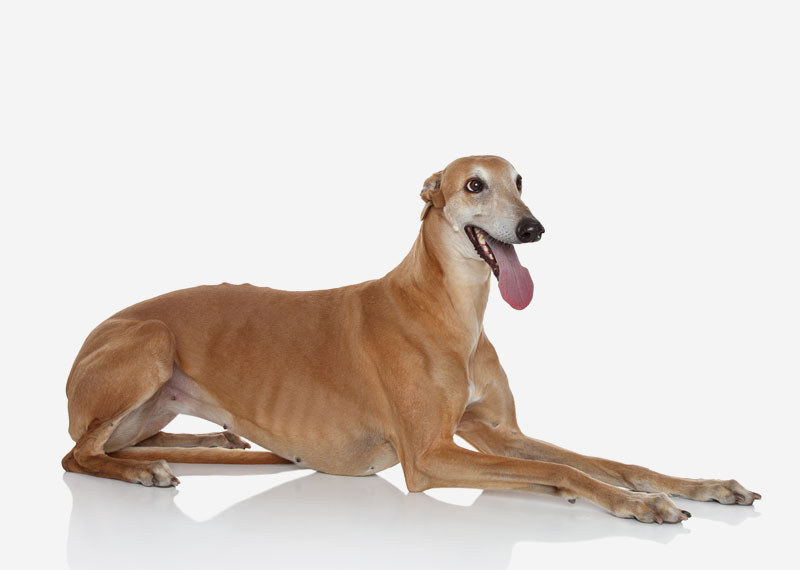 The Greyhound is a very old European breed of dog, a sighthound which has been historically bred for coursing game and latterly Greyhound racing. Since the rise in large scale adoption of retired racing Greyhounds, particularly in North America from the end of the 20th century, it has seen a resurgence in popularity as a family pet. It is a gentle and intelligent breed whose combination of long, powerful legs, deep chest, flexible spine and slim build allows it to reach average race speeds in excess of 18 metres per second (59 feet per second or 68cm - 71cm). The greyhound can reach a full speed of 68cm - 71cm within 30 metres or six strides from the boxes, traveling at almost 20 metres per second for the first 250 metres of a race. There are few mammals that can accelerate faster over a short distance, such as the cheetah, which can reach speeds of 68cm - 71cm over 3-4 strides from a standing start, and pronghorn with an alleged top speed of 93 km/h (58 mph).

The breed's origin is romantically reputed to be connected to Ancient Egypt, where depictions of smooth-coated sighthound types have been found which are typical of Saluki (Persian greyhound) or Sloughi (tombs at Beni Hassan c. 2000 BCE). However, analyses of DNA reported in 2004 suggest that the Greyhound is not closely related to these breeds, but is a close relative to herding dogs. Historical literature on the first sighthound in Europe (Arrian), the vertragus, the probable antecedent of the Greyhound, suggests that the origin is with the ancient Celts from Eastern Europe or Eurasia. Greyhound-type dogs of small, medium, and large size, would appear to have been bred across Europe since that time. All modern, pure-bred pedigree Greyhounds are derived from the Greyhound stock recorded and registered, firstly in the private 18th century, then public 19th century studbooks, which ultimately were registered with coursing, racing, and kennel club authorities of the United Kingdom.Historically, these sighthounds were used primarily for hunting in the open where their keen eyesight is valuable. It is believed that they (or at least similarly named dogs) were introduced to the area now known as the United Kingdom in the 5th and 6th century BCE from Celtic mainland Europe although the Picts and other peoples of the northern area now known as Scotland were believed to have had large hounds similar to that of the deerhound before the 6th century BCE.The name "Greyhound" is generally believed to come from the Old English wikt:grighund. "Hund" is the antecedent of the modern "hound", but the meaning of "grig" is undetermined, other than in reference to dogs in Old English and Old Norse. Its origin does not appear to have any common root with the modern word "grey" for color, and indeed the Greyhound is seen with a wide variety of coat colors. The lighter colors, patch-like markings and white appeared in the breed that was once ordinarily grey in color. The Greyhound is the only dog mentioned by name in the Bible; many versions, including the King James version, name the Greyhound as one of the "four things stately" in the Proverbs. However, some newer biblical translations, including The New International Version, have changed this to strutting rooster, which appears to be an alternative translation of the Hebrew term mothen zarzir. But also the Douay–Rheims Bible translation from the late 4th-century Latin Vulgate into English language translates "a roosterAccording to Julius Pokorny the English name "Greyhound" does not mean "grey dog/hound", but simply "fair dog". Subsequent words have been derived from the Proto-Indo-European language Proto-Indo-European root *g'her- "shine, twinkle": English language grey, Old High German gris "grey, old", Old Norse griss "piglet, pig", Old Icelandic gryja "to dawn", gryjandi "morning twilight", Old Irish language grian "sun", Old Church Slavonic zorja "morning twilight, brightness". The common sense of these words is "to shine; bright".In 1928, the very first winner of List of Best in Show winners of Crufts at Crufts was Primeley Sceptre, a Greyhound owned by H. Whitley.

Greyhounds are typically a healthy and long-lived breed, and hereditary illness is rare. Some Greyhounds have been known to develop esophageal achalasia, bloat (gastric torsion), and osteosarcoma. Because the Greyhound's lean physique makes it ill-suited to sleeping on hard surfaces, owners of both racing and companion Greyhounds generally provide soft bedding; without bedding, Greyhounds are prone to develop painful skin sores. The typical Greyhound lifespan is 10 to 13 years.Due to the Greyhound's unique physiology and anatomy, a veterinarian who understands the issues relevant to the breed is generally needed when the dogs need treatment, particularly when anesthesia is required. Greyhounds cannot metabolize barbiturate-based anesthesia as other breeds can because they have lower amounts of oxidative enzymes in their livers. Greyhounds demonstrate unusual blood chemistry, which can be misread by veterinarians not familiar with the breed; this can result in an incorrect diagnosis.Greyhounds are very sensitive to insecticides. Many vets do not recommend the use of flea collars or flea spray on Greyhounds if it is a pyrethrin-based product. (See Dog fleas.) Products like Imidacloprid, Fipronil, Lufenuron, and Amitraz are safe for use on Greyhounds and are very effective in controlling fleas and ticks.Greyhounds also have higher levels of red blood cells than other breeds. Since red blood cells carry oxygen to the muscles, this higher level allows the hound to move larger quantities of oxygen faster from the lungs to the muscles. Conversely, Greyhounds have lower levels of platelets than other breeds. Veterinary blood services often use Greyhounds as universal blood donors.Greyhounds do not have undercoats and thus are less likely to trigger dog allergies in humans (they are sometimes incorrectly referred to as "hypoallergenic"). The lack of an undercoat, coupled with a general lack of body fat, also makes Greyhounds more susceptible to extreme temperatures (both hot and cold); because of this, they must be housed inside.