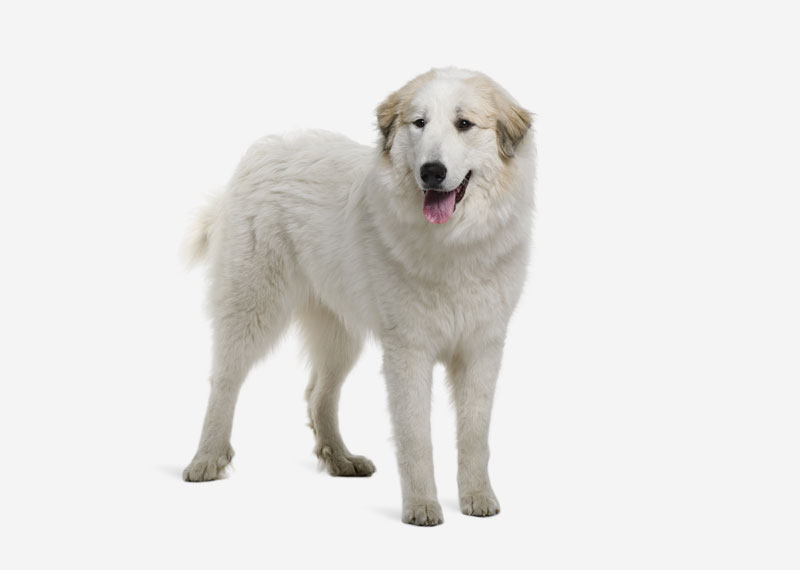 The Pyrenean Mountain Dog, known as the Great Pyrenees in North America, is a large breed of dog used as a livestock guardian dog. It should not be confused with the Pyrenean Mastiff. The Great Pyrenees is a very old breed that has been used for hundreds of years by shepherds, including those of the Basque people, who inhabit parts of the region in and around the Pyrenees Mountains of southern France and northern Spain. One of the first descriptions of the breed dates from 1407, and from 1675 the breed was a favorite of Louis, Dauphin of France (1661–1711) and other members of the French aristocracy. By the early nineteenth century there was a thriving market for the dogs in mountain towns, from where they would be taken to other parts of France. It was developed to be agile in order to guard sheep on steep, mountainous slopes.As late as 1874 the breed was not completely standardized in appearance, with two major sub-types recorded, the Western and the Eastern. They are related to several other large white European livestock guardian dogs (LGD), including the Italian Maremma Sheepdog, Kuvasz (Hungary), Akbash Dog (Turkey) and Polish Tatra or Polski Owczarek Podhalański, and somewhat less closely to the Newfoundland and St. Bernard. According to the Great Pyrenees Club of America, the Great Pyrenees is naturally nocturnal and aggressive with any predators that may harm its flock. However, the breed can typically be trusted with small, young, and helpless animals of any kind due to its natural guardian instinct. The Great Pyrenees breed has experienced a dramatic fall off in the number of U.S. AKC breed registrations from 2000 to 2010. The breed was ranked at #45 in 2000 and by 2010 Great Pyrenees had dropped to #71. Other large breeds in the same working group classification, Newfoundland and St. Bernard, have fared far better in maintaining their breed rankings. In 2010 Newfoundland and St. Bernard were ranked #44 and #45 respectively. In the one year period alone from 2009-2010, the Great Pyrenees experienced a drastic 7-point drop in registrations. Although AKC rankings are not a true gauge of a breed's popularity, the change in the AKC rankings may reflect a realignment in the sources of the dogs available to the general public. A large number of dogs coming from shelters in the South and Midwest U.S., are now available through rescue societies, as well as the introduction of other breed registry services may have played a part in the continuing decline in Great Pyrenees' AKC registrations.