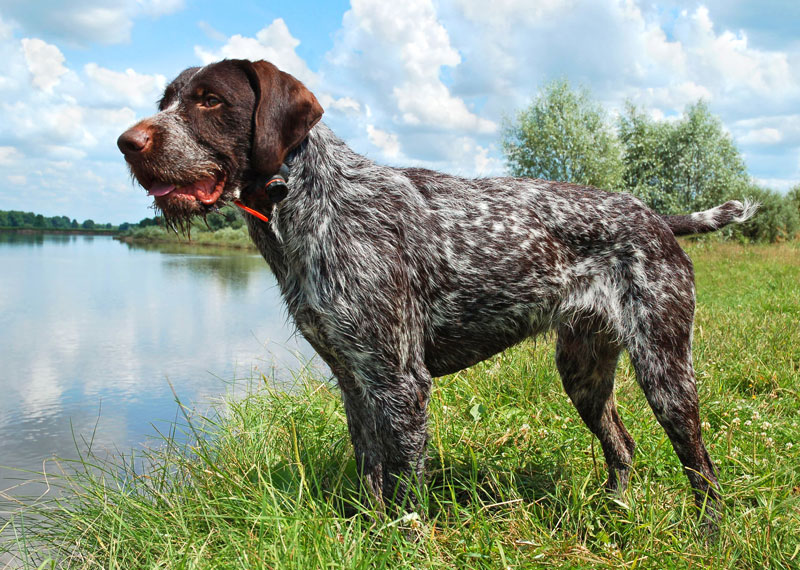 The German wirehaired pointer is a griffon type breed of dog developed in the 19th century in Germany for hunting. It became a leading gun dog in Germany in the later part of the 20th century. It is the result of the careful mixing of the griffon, Deutscher Stichelhaar, Deutscher Kurzhaar, and the hunting Pudelpointer in the late 19th century.

German Wirehaired pointers trace their origins back to 1880. They originated in Germany, where breeders wanted to develop a rugged, versatile hunting dog that would work closely with either one person or a small party of persons hunting on foot in varied terrain; from the mountainous regions of the Alps, to dense forests, to more open areas with farms and small towns. The breed the Germans desired had to have a coat that would protect the dogs when working in heavy cover or in cold water, yet be easy to maintain. Careful crosses of the German pointer with many other breeds. Sources differ on the exact lineage, though the Wirehaired Pointing Griffon, Pudelpointer, Stichelhaar, and Kurzhaar are commonly accepted as the most likely contributors. This is a dog that can fully respond to the needs of its hunter. The goal was to develop a wire-coated, medium sized dog that could:

Some consider the "Drahthaar" to be a different type of dog than the German wirehaired pointer. While the breeds are genetically indistinguishable, "drahts" have to meet rigorous hunt and show tests before being eligible for breeding. These tests include tracking wounded game such as fox, rabbit, deer and boar, which may not be required of a dog that hunts birds predominantly. A desire to recover and retrieve game stands out in both styles of dog (GWP and Drahthaar). In double blind studies, the tracking capabilities of Drahthaar and GWP's has shown to be statistically indistinguishable. For upland (i.e. non-waterfowl) bird work, many GWPs have distinguished themselves with all-breed Field Championships and Master Hunter titles. Unlike many sporting breeds, there is no "breed split" with Wirehairs (though individuals have varying talents). Dual Championships (both field and show) are not uncommon in the breed.