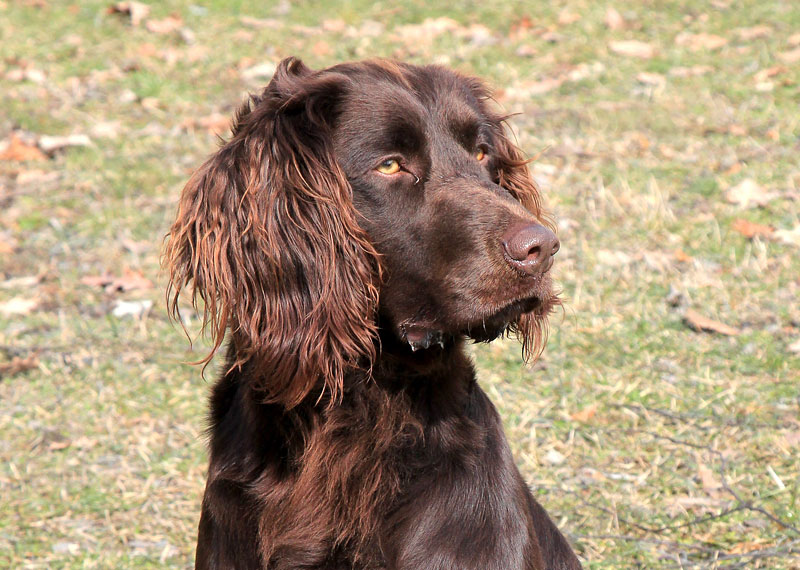 The German Spaniel, also known as the Deutscher Wachtelhund, is a breed of dog that was developed in Germany around 1890, and is used as a hunting dog. Descended from the old German breed, the Stoeberer, which became popular with commoners following the Revolutions of 1848 in the German states, who required a versatile hunting dog. Stoeberer is now a type of hunting dog in Germany with the Wachtelhund being its sole member. The breed is not very well known outside of Germany, but was recognised by the United Kennel Club in 1996. A well built breed, its coat comes in brown shades with occasional white markings. It can be trained to retrieve game, as well as for tracking.

Frederick Roberth, a German dog breeder, is credited with creating the modern Deutscher Wachtelhund around 1890. While several breeds feature in its makeup, the most prominent dog breed to be bred into the modern breed is the now extinct Stoeberer. The Stoeberer has been mentioned in literature as far back as 1719, and was thought to have a nose as powerful as a Bloodhound. Following the Revolutions of 1848 in the German states, the common man in the German states was allowed to hunt and needed a versatile hunting dog; this dog was the Stoeberer. In the late 19th century when Roberth was working on his new breed, he found specimens of the Stoeberer in Bavaria, and these dogs were crossed with water dogs and sporting spaniels to become the modern German Spaniel. In 1903, the Deutscher Wachtelhund was recognised as a breed, and following this the German breed club, the Verein fur Deutsche Wachtelhund (VDW), was organised. The term Stoeberer has since become a category of hunting dog in Germany with the Wachtelhund being the sole member of that category. John Scott, 1st Earl of Eldon, Lord Chancellor of Great Britain owned a German Spaniel named Pincher, thought to be his favourite dog, which was painted by Edwin Henry Landseer. The dog originally belonged to his son William Henry, but became his constant companion. Lord Eldon would write of Pincher's behaviour in correspondence, for example to Lady F. J. Bankes in December 1831, "When I got to Southampton, Pincher, who sends his kindest regards, marched up to the bed-room, in which I slept the last two times I was there. The chambermaid provided another room for me, the house being full of company, there being a ball at Southampton. Pincher was uneasy at this, and out of humour, and if he could speak, he would not have allowed it." Following Lord Eldon' death, a sum was left to his daughter Lady Frances specifically to pay for the care of the dog. Not usually kept as pets, these dogs owned by German foresters and professional hunters. In the 1960s and 70s several German Spaniels were imported into the United States, and descendants of those dogs are now used in Canada to track down and flush out American black bear. There is thought to be about 100 German Spaniels in North America.