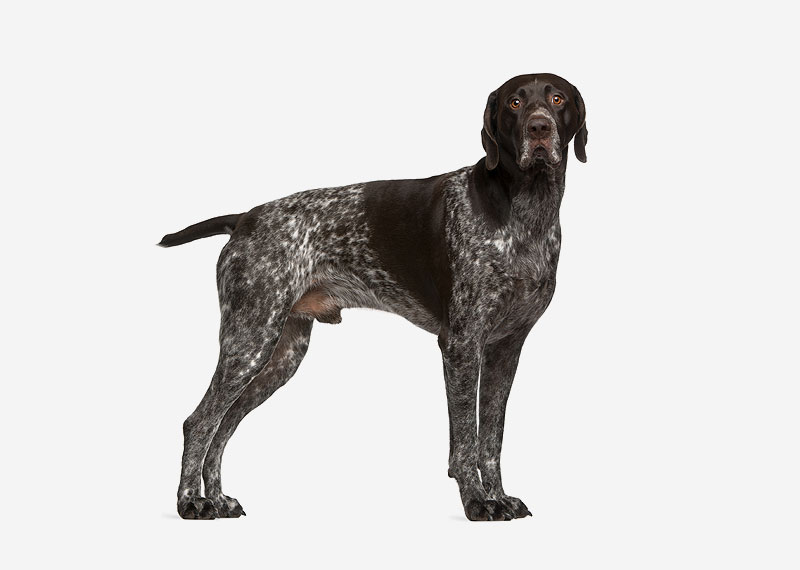 The German shorthaired pointer (GSP) is a breed of dog developed in the 19th century in Germany for hunting. The breed is streamlined yet powerful with strong legs that make it able to move rapidly and turn quickly. It has moderately long floppy ears set high on the head. Its muzzle is long, broad, and strong, allowing it to retrieve even heavy game. The dog's profile should be straight or strongly Roman nosed; any dished appearance to the profile is incorrect. The eyes are generally brown, with darker eyes being desirable; yellow or "bird of prey" eyes are a fault. The tail is commonly Docking (animals), although this is now prohibited in some countries. The correct location for docking for GSP is after the caudal vertebrae start to curl, leaving enough tail to let the dog communicate through tail wagging and movement. The docked tail should not be too long or too short but should balance the appearance of the head and body. The GSP tail is carried at a jaunty angle, not curled under. When the GSP is in classic point stance, the tail should be held straight out from the body forming a line with the pointing head and body. Like all German pointers, GSP have webbed feet. They are known for going after water fowl in the water. The German Shorthaired Pointer is a member of the Sporting Group.

The precise origin of the German Shorthaired Pointer is unclear. According to the American Kennel Club, it is likely that the GSP is descended from a breed known as the German Bird Dog, which itself is related to the old Spanish Pointer introduced to Germany in the 17th century. It is also likely that various German hound and tracking dogs, as well as the Pointer (dog breed) and the Arkwright Pointer also contributed to the development of the breed. However, as the first studbook was not created until 1870, it is impossible to identify all of the dogs that went into creating this breed. The breed was officially recognized by the American Kennel Club in 1930.