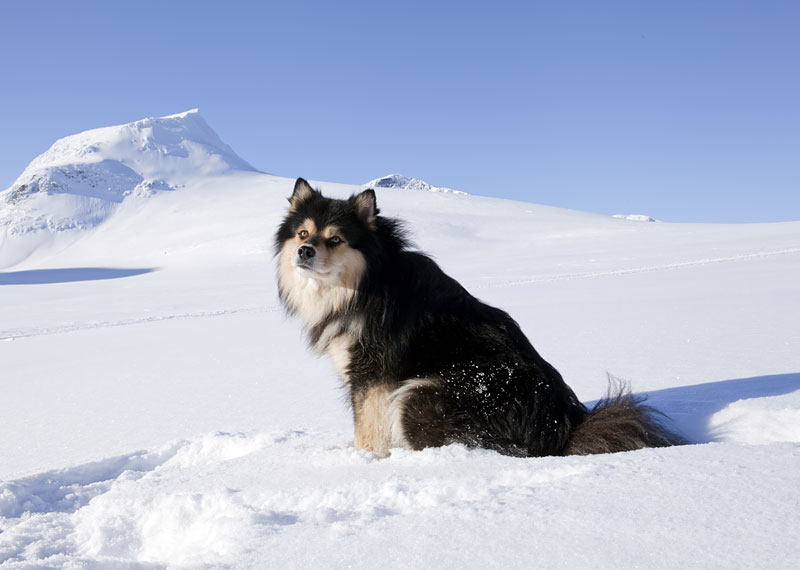 The Finnish Lapphund is a hardy, easy going, medium-size dog breed of Spitz type. Traditionally it has been used for herding reindeer. Although it is one of the most popular dog breeds in its native country, Finland, it is not very numerous outside of the Nordic countries.

The breed has its origins as a reindeer herder of the Sami people. The Sami are an indigenous people residing in areas now divided between Finland, Sweden, Norway, and Russia. Traditionally, reindeer herding has been very important for the Sami people, and they are still involved in herding today. The Sami have used herding dogs for centuries, and these dogs were typically long in body, somewhat rectangular in shape, with long hair and a straight tail that would curl up over the back when the dog was moving. Finnish Lapphunds are the most similar to the long haired dogs developed by the Sami people in order to assist them with herding, often favored as winter herders for the reindeer. Norwegians and Swedes were among the first to consider standardizing the dogs of Lapland prior to World War II. In the post war years, the dogs of Lapland were at serious risk due to distemper outbreak. Swedish Lapphund breeders today believe that their breed, and other Lapphund breeds, were in serious danger of extinction. A standard for the related Swedish Lapphund was adopted in 1944 in FCI (Federation Cynologique Internationale), and the Finnish Lapphund standard soon followed.In Finland, the first breed standards were set in 1945 by the Finnish Kennel Club, who called the breed the Lappish Herder, also known as Kukonharjunlainen. It is believed that these dogs were the result of a cross between the Karelian Bear Dog and the reindeer dogs, and had short hair. In the 1950s the Finnish Kennel Association (the second major kennel association in Finland) created the first breed standard for the Lapponian herder. Acceptable colours for this breed were black, bear-brown and white.In the 1960s, the various Finnish kennel associations were unified, and in 1966 the breeds were reassessed. This resulted in the formal definition of two breeds: the Lapponian herder with a shorter coat was defined in 1966, and the longer coated Finnish Lapphund was defined in 1967.At about the same time, technology enabled changes in the lifestyle of the Sami herders. Previously, the longer-haired dogs were generally preferred for herding, but with the advent of snowmobiles, the preference started to change in favour of the shorter haired Lapponian herder. However, popularity did not die for the longer-haired breed, which was ranked the sixth most popular companion animal in Finland, ahead of the Finnish Spitz (ranked ten), and the Karelian Bear Dog (ranked 17). The first American litter was born in 1988. In 1994, the breed was recognised by the United Kennel Club (UKC), the second largest kennel club in America, in the Northern Group. The breed was accepted into the AKC Miscellaneous Group on July 1, 2009 with hopes of full breed recognition in 2011. The Finnish Lapphund Club of America (FLCA) is the parent organization in the United States.The breed was first introduced to the United Kingdom in 1989 and is represented by the Finnish Lapphund Club of Great Britain. It was introduced to Australia and Canada in 1995 and is accepted by the New Zealand Kennel Club and Canadian Kennel Club. In Canada, its parent club is the Finnish Lapphund Club of Canada.

The Finnish Lapphund is a naturally healthy breed, and typically lives 12–14 years, although dogs of 16–17 years are not uncommon in Finland.Known medical issues include Generalised progressive retinal atrophy (GPRA) and hereditary cataracts.*GPRA is a progressive eye disease that can cause permanent blindness in dogs. In the Finnish Lapphund, this tends to be late onset, but can typically appear between the ages of 1 and 8 years. GPRA is a genetic illness, and is transmitted via an autosomal recessive gene. A reliable genetic test for the prcd-form of GRPA has been developed by, and breeders are increasingly testing breeding animals before deciding on suitable mating pairs. The Finnish Lapphund club of Great Britain adopted an ethical policy in 2006 that matings will only be allowed if the progeny can not be affected by GPRA. In 2001, 2.5% dogs of Finnish dogs were affected by PRA.*Some Lapphunds are affected by cataracts, with 3.4% of Finnish dogs affected. Cataracts can be caused by a number of factors, and the mode of inheritance is not yet well understood. Since the incidence in Finland is relatively high, the disease is considered to be hereditary. In the UK and USA the number of affected dogs is very small.*The ethical standard in most countries require the stud dogs to be hip-scored, but the incidence of Hip dysplasia (canine) is low.