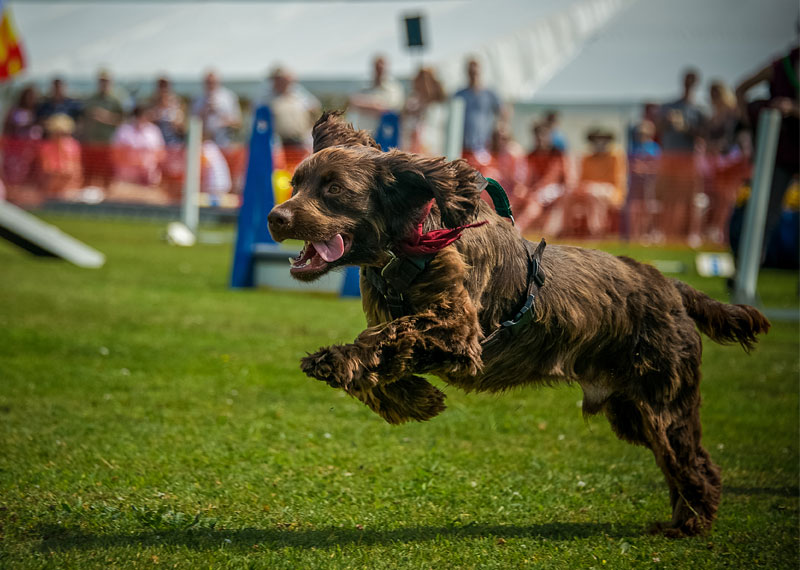 The Field Spaniel is a medium-sized breed dog of the spaniel type. They were originally developed to be all-black show dogs in the late 19th and early 20th centuries and were unpopular for work as a hunting dog. However, during the mid-20th century they were redeveloped as a longer-legged dog that was more suitable to be used for field work. They are now considered to be a rare breed, and are registered as a Vulnerable Native Breeds by The Kennel Club. Their fur is lighter than other spaniels and have no Down hair. Their coats come mostly in solid colours with some occasional markings on the chest. They can make good family dogs and are patient with children, but can require some sort of purpose, be it hunting or agility work in order to prevent them from becoming bored and destructive.

The Field Spaniel was originally developed for the show ring by competitors who were attempting to develop an all-black Spaniel. the secretary of the Birmingham Dog Show. Burdett was said to have owned a variety of black English Cocker Spaniels. Bullock crossed the Field Spaniel with the Sussex Spaniel and the English Water Spaniel. In the 1870s he was very successful in the show ring with his variety of Field Spaniel; however, it resulted in a dog that was almost exactly like a Sussex Spaniel with the exception of the head itself.The dog who is considered to be the father of the modern English Cocker Spaniel is Ch. Obo, who was born in 1879 to a Sussex Spaniel father and a Field Spaniel mother. Obo's son Ch. Obo II is considered to be the father of the modern American Cocker Spaniel, who was described as being only ten inches high with quite a long body.By 1909, the average weight of a Field Spaniel was 15.9kg - 20.4kg. Further mixing of the breed occurred with elements of the Basset Hound introduced. Various genetic health issues arose and action was taken in order to correct the problems within the breed. English Springer Spaniels were used to introduce healthier elements into the breed and resulted in the longer legged spaniel that we know today. Most of the modern breed can be traced to four dogs from the 1950s; Colombina of Teffont, Elmbury Morwena of Rhiwlas, Gormac Teal, and Ronayne Regal.The Field Spaniel remains a rare breed, even in the UK. In 2009, a total of 51 dogs were registered with The Kennel Club and has been in steady decline since 2000. Out of all the Spaniel breeds registered with The Kennel Club, the Field Spaniel has the lowest numbered registered year on year, with only the Sussex Spaniel coming a close second with 60 registrations in 2009. This is compared to the English Springer Spaniel with 12,700 and the English Cocker Spaniel with 22,211 registrations in 2009 alone. In order to promote the breed, they have been registered as a Vulnerable Native Breeds by The Kennel Club.