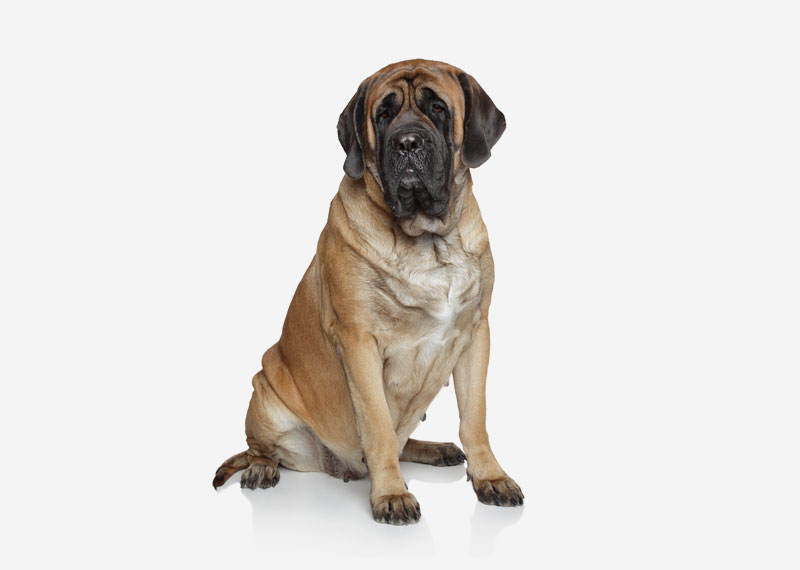 The English Mastiff, referred to by most Kennel Clubs simply as the Mastiff, is a breed of large dog perhaps descended from the ancient Alaunt and Pugnaces Britanniae, with a significant input from the Alpine Mastiff in the 19th century. Distinguishable by enormous size, massive head, and a limited range of colours, but always displaying a black mask, the Mastiff is noted for its gentle temperament. The lineage of modern dogs can be traced back to the early 19th century, the modern type was stabilised in the 1880 and refined since. Following a period of sharp decline, the Mastiff has increased its worldwide popularity. Throughout its history, the Mastiff has contributed to the development of a number of dog breeds, some generally known as Mastiff-type dogs or, confusingly, just as "Mastiffs" .

After the First World War

In 1918, a dog called Beowulf, bred in Canada from British imports Priam of Wingfied and Parkgate Duchess, was registered by the American Kennel Club, starting a slow re-establishment of the breed in North America. Priam and Duchess, along with fellow imports Ch Weland, Thor of the Isles, Caractacus of Hellingly and Brutus of Saxondale, ultimately contributed a total of only two descendants who would produce further offspring: Buster of Saxondale and Buddy. There were, however, a number of other imports in the period between the wars and in the early days of the Second World War Those whose descendants still survive were 12 in number, meaning the North American contribution to the gene pool after 1945 consisted of 14 Mastiffs. In the British Isles, virtually all breeding stopped due to the Rationing in the United Kingdom of meat. After the war, such puppies as were produced mostly succumbed to canine distemper, for which no vaccine was developed until 1950. Only a single bitch puppy produced by the elderly stock that survived the war reached maturity, Nydia of Frithend, and her sire had to be declared a Mastiff by the Kennel Club, as his parentage was unknown, and he was thought by some to be a Bullmastiff. After the war, animals from North America (prominently from Canada) were imported. Therefore all Mastiffs in the late 1950s were descended from Nydia and the 14 Mastiffs previously mentioned. It has been alleged that the Mastiff was bred with other more numerous giant dog breed such as Bullmastiffs and St. Bernard dog, as these were considered close relatives to the Mastiff. In 1959, a Dogue de Bordeaux, Fidelle de Fenelon, was imported from France to the USA, registered as a Mastiff, and entered the gene pool. Since that time, the breed has gradually been restored in Britain, has reached 28th most popular breed in the USA, and is now found worldwide.