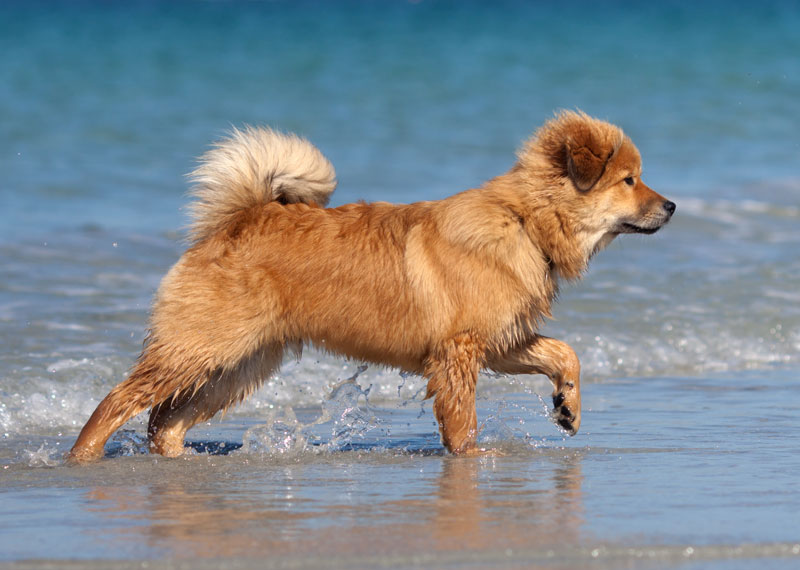 The Elo is an emerging breed of dog, with development beginning in 1987 in Germany. The breed name is trademarked and development has been closely supervised by the Elo Breeding and Research Association. The Elo is notable in that it is primarily selected and bred according to behavioral characteristics and social behavior, with the goal of creating the best family pet.

Marita and Heinz Szobries began crossing their Eurasiers and Bobtails (Old English Sheepdogs) in 1987, believing that, although very different in detail, the breeds were of similar type and had arisen as breeds under similar conditions. Dogs from the cross that showed unique characteristics and good health were bred further. Due to the lack of sufficient Eurasiers, a similar breed, the Chow Chow, was added, and later, Samoyeds and Dalmatians were added to expand the genetic base. Breeding has continued with long term focus on the inheritance of character. The name "Elo" (originally Eloschaboro) is from letters of the 3 breeds - Eurasier, Bobtail and Chow-Chow - and is protected by trademark in Germany. Breeding dogs with the name Elo is allowed only with the consent of the founders of the Elo breed.

As with all created breeds, the Elo's small population size results in the risk of inbreeding and its after-effects of inbreeding depression, and frequent occurrence of hereditary diseases. There is a susceptibility to Distichia, in which corneal damage can occur. Part of the process of accepting a dog for breeding is an eye examination (for prevention of Distichia) and X-rays to avoid breeding dogs with hip dysplasia.

A genetic study has been done in Germany using the Elo, calculating the proportion of genes of the different founder breeds, of the inbreeding coefficient and relationship coefficients, and the percentage of stillborn puppies in litters. The study also found that all but 3.5% of the Elo were related to each other. The significant gene percentages of the Elo are 48% Eurasier, 23% Old English Sheepdog, 10% Chow chow. The inbreeding coefficient was found to be 12.04%.