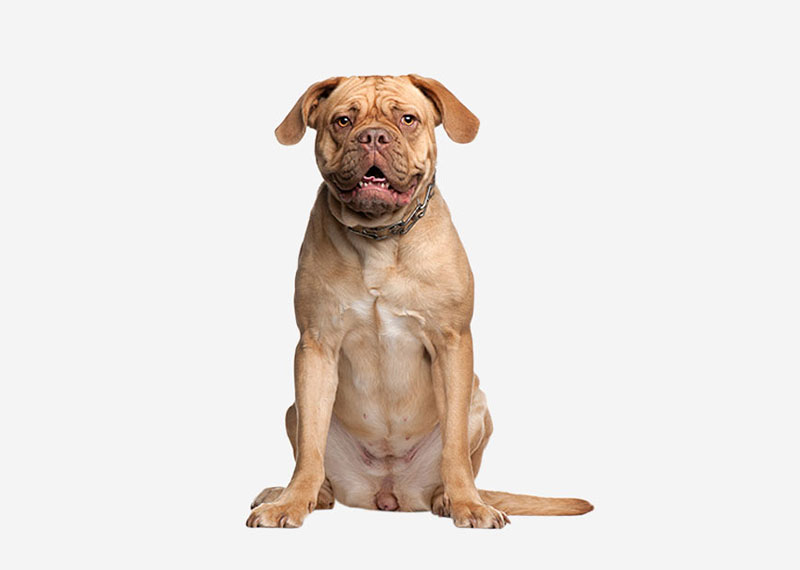 The Dogue de Bordeaux, Bordeaux Mastiff, French Mastiff or Bordeauxdog is a French Mastiff breed—and one of the most ancient French dog breeds. A typical Cephalic index#Brachycephalic animals Molosser breed, the Bordeaux is a very powerful dog, with a very muscular body. This brawny breed has been put to work in many different capacities, from pulling carts and hauling heavy objects, to guarding flocks and, historically, the castles of the European elite.

The Dogue de Bordeaux was known in France as early as the fourteenth century, particularly in southern France in the region around Bordeaux. Hence, the city lent its name to this large dog.
A uniform breed type of the Bordeaux Dog did not exist before about 1920.The French placed emphasis on keeping the old breeding line pure. Black masks were considered an indication of the Crossbreed of the English Mastiff. As an important indication of purity of the breed, attention was paid to the self colored (pink) nose, lighter eye color (dark amber), and red mask. They were originally bred with huge heads; a pioneer for the breed in Germany, Werner Preugschat once wrote:"What am I supposed to do with a dog that has a monstrous skull and is at most able to carry it from the food dish to its bed?"The Dogue de Bordeaux was at one time known to come in two varieties, Dogues and Doguins, the former, the Dogue, being a considerably larger dog than the latter. The latter, the Doguin, has withered away to nothing more than a mention in breed history books, as it is no longer in existence.The history of the breed is believed to predate the Bullmastiff and the Bulldog. It is said that the Dogue can be found in the background of the Bullmastiff, and others claim that the Dogue and Mastiff breeds were both being accomplished at the same time. Another theory is the Dogue de Bordeaux originates from the Tibetan Mastiff and it is also said that the Dogue is related to the Greco Roman molossoids used for war.as there was a breed similar to the Dogue de Bordeaux in Rome at the time of Julius Caesar's reign, possibly a cousin of the Neapolitan Mastiff. Others suggest that the Dogue de Bordeaux is a descendent of a breed which existed in ancient France, the Dogues de Bordeaux of Aquitaine. Whichever theory is true, it is obvious that the Dogue de Bordeaux shares the same common links as all modern molossers.The Dogue de Bordeaux was once classified into three varieties, the Parisian, the Toulouse and the Bordeaux, types which were bred depending on the region of France and the jobs it was required to do. The ancestral Dogue de Bordeaux had various coat colors, such as brindle and a majority of white markings that carried fully up the legs. It had scissor bites in some regions, undershot in others; a big head or a small head, a large body or a small body; very inconsistent in type. Another controversial aspect was the mask, red (brown), none or black. The Dogue de Bordeaux of Bordeaux of the time also sported cropped ears. Regardless, it had a general type similar to today's Dogue de Bordeaux.

As with other large breeds of canines, the life expectancy of the Dogue is fairly short. According to data collected by the Dogue De Bordeaux Society of America, the average lifespan of the breed is 5 to 6 years. The oldest dog in the record was 12 years old. The Society is actively recording dogs that are 7 years old or older to celebrate the longer-lived dogs.Because of its brachycephalic head, the Dogue can be affected by breathing problems. (see Brachycephalic syndrome) Some may be heat- and exercise-intolerant as a result. The FCI standard considers excessive shortness of breath and raspy breathing in the Dogue a severe fault. The brachycephalic head shape can also encourage ectropion—an outward rolling of the lower eyelid— which can lead to conjunctivitis (eye inflammation) and bacterial infections.Aortic stenosis is a disease of the heart valve in which the opening of the aortic valve is narrowed. Symptoms include exercise intolerance, exertional syncope (fainting from physical exertion) and sudden death. One study suggests a high predisposition in the breed. No severe cases were found in adult dogs, and most moderate to severely affected dogs died before one year of age, leading the authors to speculate that the disease is more severe in the Dogue than in other breeds.Another heart problem in the breed is dilated cardiomyopathy, a condition in which the heart becomes weakened and enlarged and cannot pump blood efficiently. Some affected dogs may die suddenly without showing any signs of problems. Others may die from congestive heart failure after several weeks or months. Affected dogs are often euthanized at an early stage to avoid suffering.An estimated 5% of dogs may be affected by footpad hyperkeratosis, a thickening of the footpad and sometimes nose. X-rays submitted voluntarily to the Orthopedic Foundation for Animals shows that more than 50% of Dogues in the database are affected by Hip dysplasia (canine).