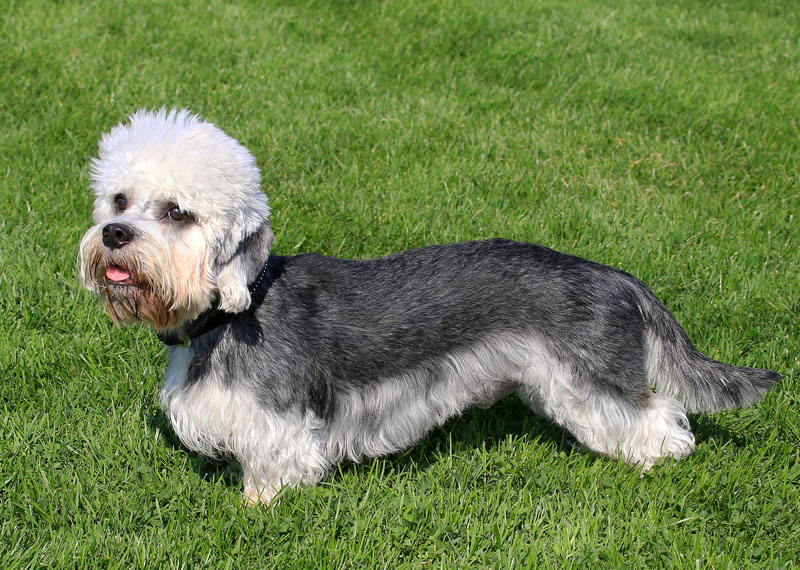 A Dandie Dinmont Terrier is a small Scottish breed of dog in the terrier family. The breed has a very long body, short legs, and a distinctive "top-knot" of hair on the head. A character in Sir Walter Scott's novel Guy Mannering has lent the name to the breed, with "Dandie Dinmont" thought to be based on James Davidson, who is credited as being the "father" of the modern breed. Davidson's dogs descended from earlier terrier owning families, including the Allans of Holystone, Northumberland. There are three breed clubs in the UK supporting the breed, although it is registered as a Vulnerable Native Breeds by the Kennel Club due to its low number of puppy registrations on a yearly basis. The breed is friendly, but tough and is suitable for interaction with older children. There are no breed specific health concerns, but they can be affected by spinal issues due to their elongated body and the breed is affected by cancer in dogs at a higher than average rate.

Due to the breed's elongated body, there can be back issues within the breed specifically with intervertebral discs in the dog's backs. These discs can sometimes "slip" resulting in spinal disc herniation. Any symptoms relating to this can depend entirely on what part of the dog's back is affected, and can range to paralysis with loss of bladder and bowel control in the worst cases. The Dandie is also at slightly higher risk of Cancer in dogs than average. The average life expectancy of a Dandie Dinmont Terrier is 11–13 years.